Do You Recognise San Francisco's Most Famous Streets?

Do You Recognise San Francisco's Most Famous Streets?

Every city has its share of vibrant streets; those colourful urban corridors and bustling thoroughfares, which in large measure, are the veins that drive the pulse of a city. The lifeblood of San Francisco, those lofty streets, broad avenues and intimate lanes, all reveal a side of the city that are best explored on foot. Some of the most iconic places in America, these streets of San Francisco will not disappoint. 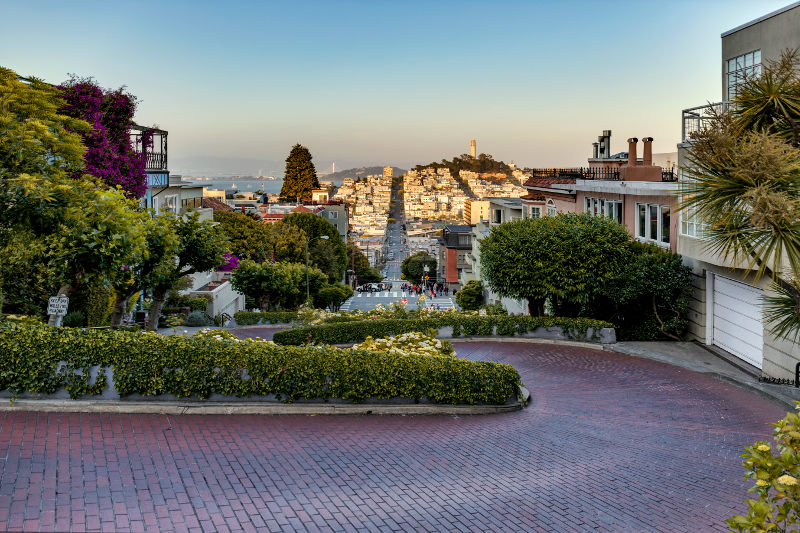 Take the Hyde Street Cable Car line to the ‘most crooked street in the world’ – Lombard Street. Weaving left and right down the steep face of Russian Hill, Lombard Street has been made famous in movies and photographs. 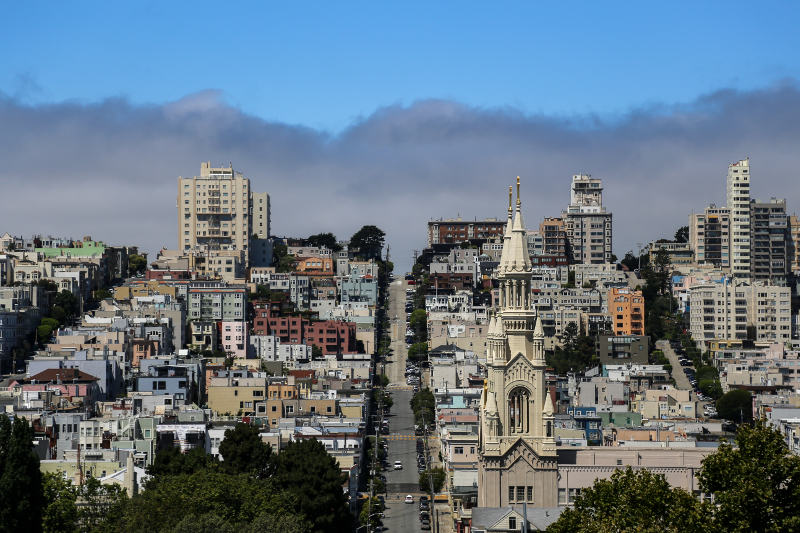 Just like a theme park... the steepest street in San Francisco. Image: Getty

If the erratic twists and turns and dizzying heights of Lombard Street aren’t enough, travel two blocks south (left at the end of the crooked stretch of Lombard) and head to the vertiginous Filbert Street. Go slow when driving because this downhill grade reaches 31.5 percent, officially making Filbert the steepest street in San Francisco.

A post shared by Fillmore Street San Francisco (@fillmorestreetsf) on

Energised by the local hipsters and urban professionals, Fillmore Street extends north from the lower Haight neighbourhood to the Marina District. In between are blocks and blocks of trendy shops, cafes and restaurants. The summer brings local festivals and block parties. 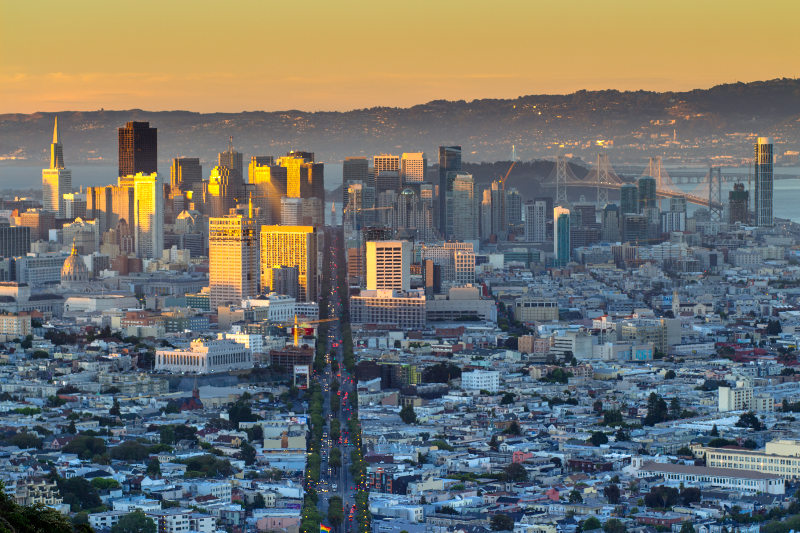 One of the city’s main thoroughfares, Market Street stretches for miles, from the Embarcadero and beautiful San Francisco Ferry Terminal, past the Australian Consulate and major Downtown shopping centres, to the Mission District, The Castro and around Twin Peaks. A popular street for festivals, parades and events, Market Street is the lifeblood of the city. 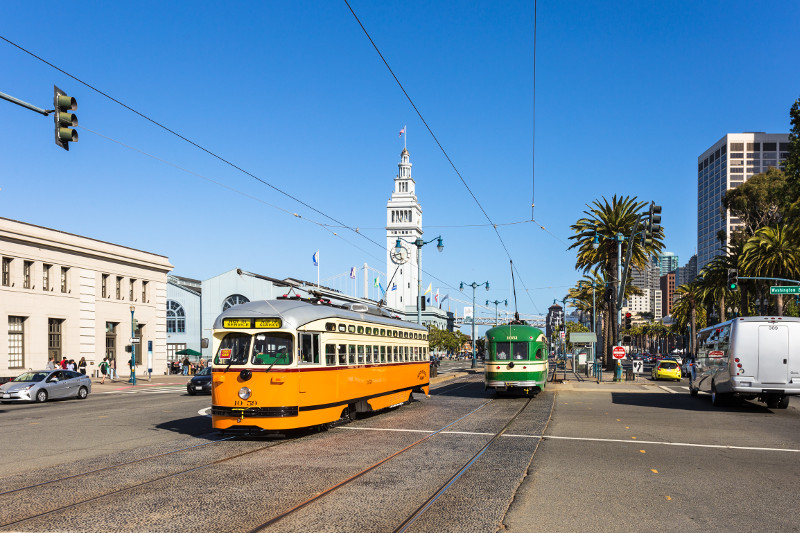 The historic tramway on the Embarcadero. Image: Getty

Another famous San Francisco artery, the Embarcadero forms much of the eastern shore of the Downtown area, from Pier 39 to the Ferry Terminal and beyond. Because of its many hotels and attractions, the wide boulevard is popular with tourists, but locales alike can be seen visiting the farmer’s markets on the weekends.

More of a staircase laneway than a street, the 16th Avenue Tiled Steps is a colourful staircase decorated with bright tiles. The effect creates a beautiful mosaic when viewed from the bottom of the 163-step staircase. 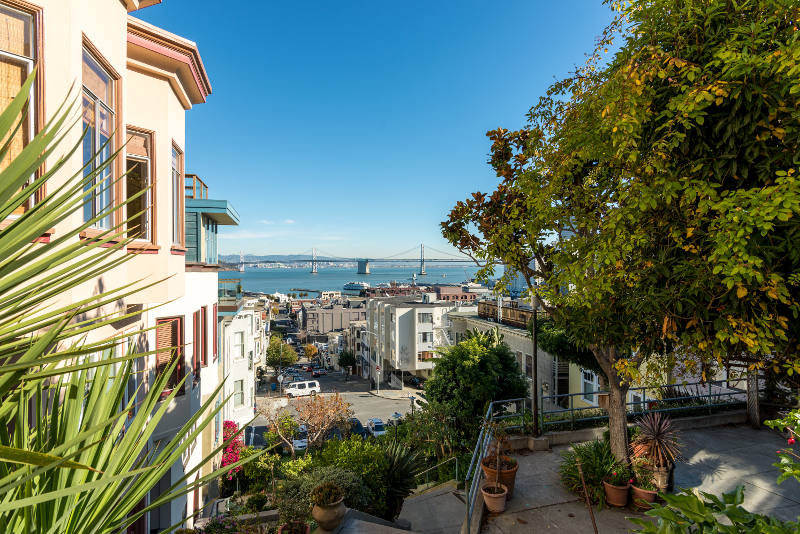 Looking down Vallejo Street, with the Bay Bridge in the background. Image: Getty

Russian Hill’s Vallejo Street Steps afford beautiful views of the city and beyond. Bordered by lush gardens, with towering trees enveloping the stairway, the walk is one of the most peaceful and picturesque spots in the city. 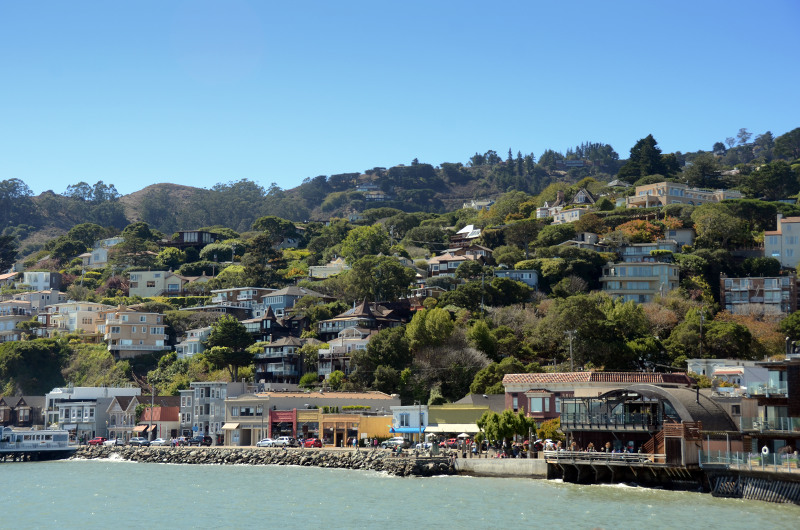 A little town with a big personality: Sausalito. Image: Getty

Head over the Golden Gate Bridge to the lovely little town of Sausalito. Bridgeway, the bay side main street offers beautiful water views and is a popular place to duck in to the local shops or have a bite to eat at one of the popular local eateries. After a hearty lunch or cup of coffee, take a relaxing ferry ride back to Fisherman’s Wharf.

A post shared by Mayes - San Francisco (@mayessf) on

The south end of Polk Street is known as Polk Gulch, an area of diverse ethnic backgrounds where restaurant goers and foodies can find cuisine from a variety of cultures. The street has an edge to it, with many bars, clubs, cafes and restaurants. The centre of 1960 and 70s gay culture, Polk Street was the site of some of the world’s first pride marches and festivals. 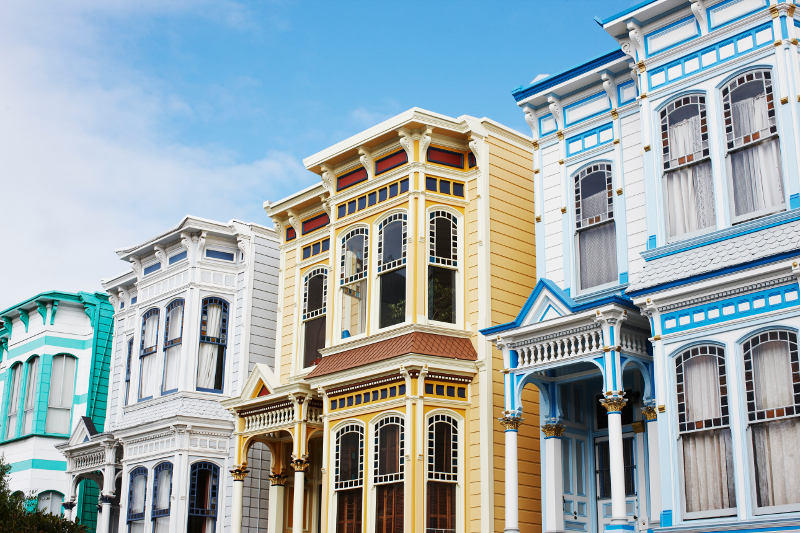 The Mission District is known for its colourful Victorian homes. Image: Getty

South of Downtown and bordering the southern end of Market Street, the Mission District is known for its Latin flair and artist friendly atmosphere. Walk the popular section between 15th and 20th Streets and you’ll find a wide array of bars, cafes, restaurants and interesting shops.

Between San Francisco City Hall and the Castro, Hayes Street in the Hayes Valley section of the city is a funky part of town known for its music venues, trendy bars and restaurants. Several blocks south is the San Francisco LGBT Community Center. One of the neighbourhood hot spots, Hayes Street is also blessed with local shops, boutiques and cafes.