Can You Dig It? Earthly Delights In The Outback

Can You Dig It? Earthly Delights In The Outback

The earth offers up its secrets in Outback Queensland and those who seek them out are richly rewarded. If you’re a budding palaeontologist, gemologist or volcanologist – or just like to get your hands dirty – these geological wonders are for you. From fossils to rivers of fire, sapphires to spelunking, here are three ways to dig deeper into Queensland’s Outback. 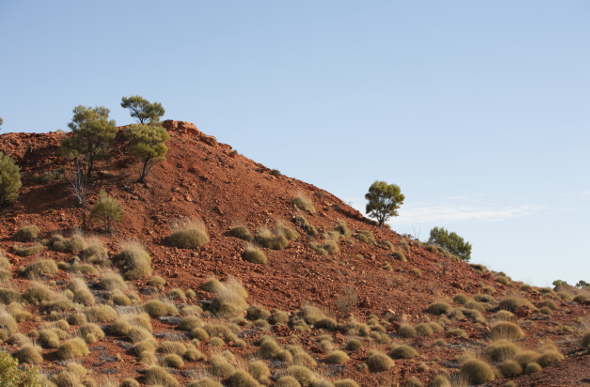 Dino fever has struck Queensland anew, with the identification of Australia’s newest dinosaur last month and the opening of a digital dinosaur zoo. The Kunburrasaurus – which looks like a cross between a crocodile and a turtle – was actually discovered in 1989 in Richmond, Queensland, but has only recently been identified as a distinct type of ankylosaur. You can see its bones in the Queensland Museum in Brisbane.

The Dino Zoo at the Queensland University of Technology in Brisbane has given 10 full-sized digital dinosaurs artificial intelligence – stand in a room as they stomp along the walls and react to your presence. Watch out for the deadly Australovenator – another Queensland discovery. The Dino Zoo project closes January 27.

[embed]https://youtu.be/0woEDqtJVFE[/embed]
But the Outback is much closer to the bone, so to speak, if you follow the dinosaur trail. Hit Hughenden’s Flinders Discovery Centre for marine dinosaur fossils and Hughie, the mighty Muttaburrasaurus. Or meet Penny the plesiosaur and Krono the Kronosaurus at Richmond’s Kronosaurus Korner, where you can also go fossil fossicking.

Can you feel the ground tremble? That’s the Dinosaur Stampede at Lark Quarry Conservation Park, where you can see the tracks of more than 300 dinosaurs. In Winton, the Australian Age of Dinosaurs Museum lets you help prep real fossils for display.

Rich in fossils: Winton – Top Of The Dinosaur Bone Heap

On the hunt for bunyips: Where To Find Mythical Beasts

There’s gold in them thar fields –and sapphires and opals. Treasure hunters, hie thee to Queensland’s Capricorn region for an enriching escape. Hark back to the gold rush at the historic town of Mt Morgan, about 38 kilometres southwest of Rockhampton. Here you can take a tour of the heritage-listed Mount Morgan Mine, which was one of the richest gold mines in the world when it opened in 1882.

Or take your pick to the gemfields (about four hours west of Rockhampton) to fossick for sapphires at the towns of Rubyvale, Sapphire and Anakie, as well as The Willows gemfields. If you don’t want to dig, visit a fossicking park, where all you need do is sieve and sort for sapphires. Time it right in August and you can enjoy the annual four-day Gemfest, with offerings from international gemstone traders.

Or venture much farther west to noodle for boulder opals at Opalton outside Winton.

About 190,000 years ago a volcano erupted, sending lava down a dry riverbed in the Gulf Savannah Country. The top layer cooled, forming a crust, while the rest flowed away, leaving a series of hollow tubes, winding beneath a strip of dry rainforest. So formed the lava tubes in Undara Volcanic National Park, about 300 kilometres southwest of Cairns.

You can tour this geological marvel with an easy descent via boardwalk or a tale more challenging route, climbing over rocks and wiggling on your belly through narrow passages. Head there in the Green Season, from late October to March, when rains trigger an explosion of colour. 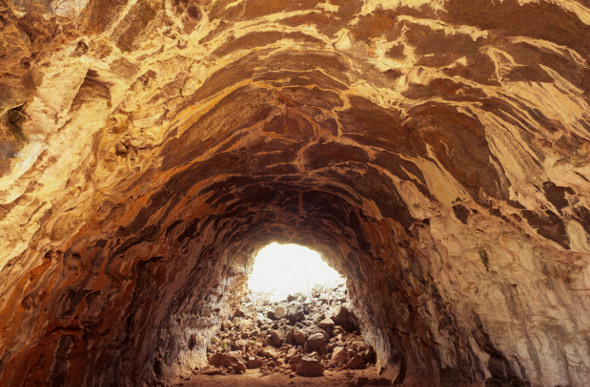 There's light at the end of the lava tube at Undara. Picture: Getty Images

If glistening caverns of stalactites are more your style, visit the Capricorn Caves inland from Yeppoon. Marvel at the acoustics in the Cathedral Cave, try your hand at spelunking, or even hold your wedding here.

Discover the vulnerable ghost bat, learn about calcite chemistry or look for fossils in the cave walls. There’s even a Poo and Spew (that’s Bats and Bones) tour for the little ones.

So what are you waiting for? Head Outback and dig in to Queensland’s earthly delights.