To say you can eat well in Hong Kong is an understatement. You can stuff yourself with dim sum, wallow in deep bowls of noodles, chew on all sorts of sticky, barbecued meats and pop some egg waffles in your gob. And all before lunchtime.

You can enjoy decadent rooftop cocktails or local beer that's cheaper than water (and just as easy to drink). Whether it's congee or coffee you seek, here are 11 restaurants and cafes to add to your 'must try' list in Hong Kong. 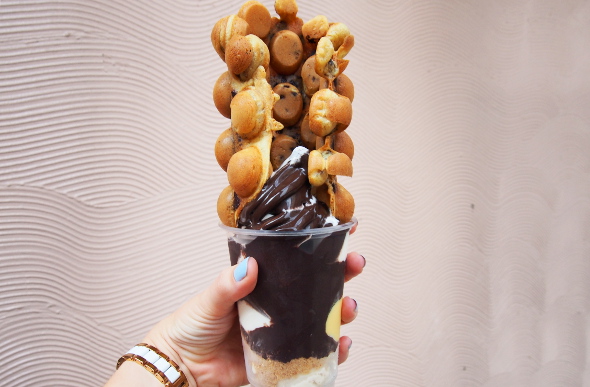 This Wan Chai hole-in-the-wall may be small in square footage but delivers big on eye-popping, drool-worthy, Insta-ready desserts.

Putting a modern spin on traditional egg waffles, Oddies pairs parfait 'eggettes' with 66% dark chocolate 'low fat' soft-serve gelato, caramelised banana ice cream and passion fruit panna cotta to create the 'Night Wolf' (pictured above). It will set you back $HK49 and a week's worth of exercise.

Fun to say and even more enjoyable to dine at, Ho Lee Fook draws hip young things to its Soho basement to feast on the likes of 'mostly cabbage, a little bit of pork' dumplings and 'breakfast 2.0' for dessert.

Chef Jowett Yu – of Mr. Wong and Ms. G's fame in Sydney – injects plenty of fun into his menu, from pork floss to pineapple cookies and cocktails hidden in bubble tea cups. The roast Wagyu short ribs are something else entirely. It's 'good fortune for your mouth'. Literally. 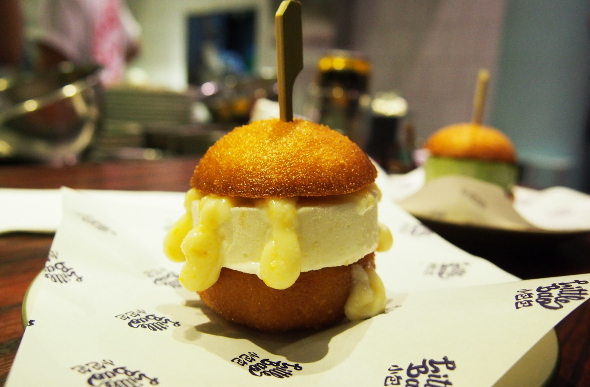 Bao burgers are obviously the main attraction, but be sure to save room for a side of truffle fries and sweet bao for dessert. On-menu ice cream sandwiches include green tea or salt ice cream fillings, while specials scrawled above the kitchen have been known to include ginger ice cream with orange blossom and cream cheese sauce. 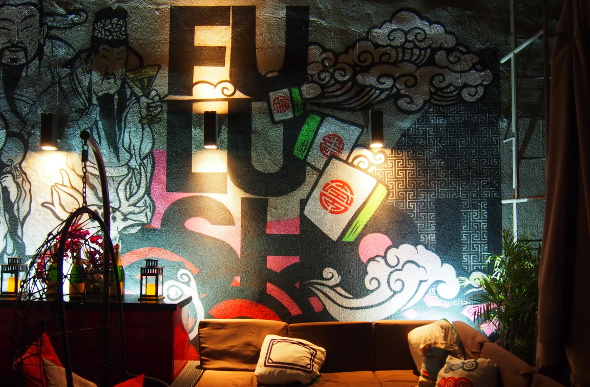 Fu, Lu and Shou are familiar faces. The Gods of prosperity, status and longevity are central to Chinese culture, but the bearded deities have taken on a new meaning of late, lending their names to a casual rooftop bar on Hollywood Road.

This 'blink and you'll miss it' spot requires a pincode to enter (posted daily on their Facebook page), and will see you sitting in a swing chair sipping Typhoon cocktails well into the wee hours.

Chef Mak is taking over the world, one dumpling at a time. Not satisfied with running the world's cheapest Michelin-starred restaurant, the humble chef has opened an empire of dim sum restaurants around the world, including right here in Aus.

Make a beeline for the original digs at Sham Shui Po to try the Big Four: baked BBQ pork bun, vermicelli roll stuffed with pig's liver, pan fried turnip cake and steamed egg cake. The first and last are simply amazing. I ate three of the four pork buns and regret nothing. 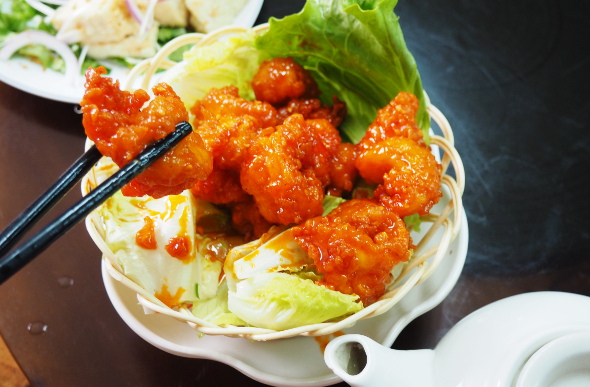 Leave the hustle of Hong Kong behind as you make your way out to Lantau Island, heading west of the airport to Tai O fishing village for a taste of tradition. There, in amongst the stilt houses and dried fish markets, you'll find the Tai O Crossing Boat Restaurant.

You might need some help navigating the menu, but just remember the specials on the whiteboards are there for a reason. Battered fish in sweet mango sauce, fresh fried octopus cakes and sweet-and-sour prawns are particular standouts. 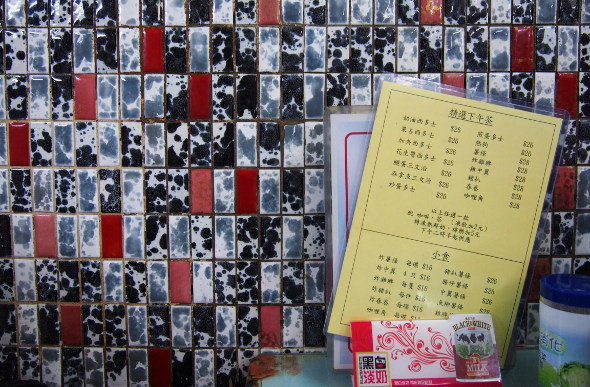 The classic decor of 'China Cafe'

To venture inside this Mong Kok cafe is to step back in time. It's known by many names including Chinese Himuro and China Cafe and you'll have to make your way down a Canton Road market to find it, but it's well worth tracking down.

The nostalgic Chinese Himuro has been around since the 1960s and has served as a backdrop for a few classic Hong Kong films in its day. Come for the kitschy setting, stay for the thick-cut French toast with sugar syrup and surprisingly enjoyable red bean milk drink. 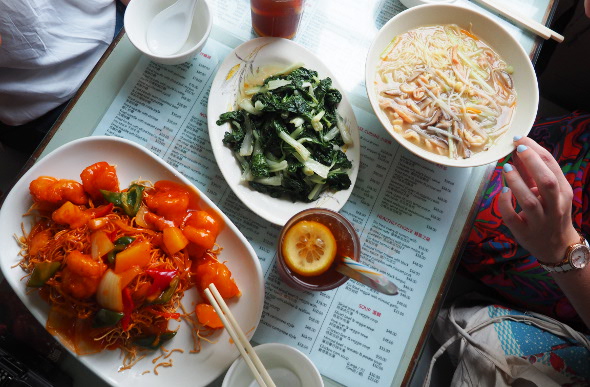 Much like Chinese Icehouse, Mido Cafe is a blast from the past. This Kowloon institution has a well preserved 1950s/60s interior offering a glimpse of 'retro' Hong Kong.

Known as traditional a 'cha chaan teng' (tea house), Mido Cafe is a great choice for either breakfast or lunch. If peanut butter and condensed milk on white toast doesn't cut it for you, stick around for massive, warming bowls of chicken noodle soup or vibrant purple stir-fried eggplant. 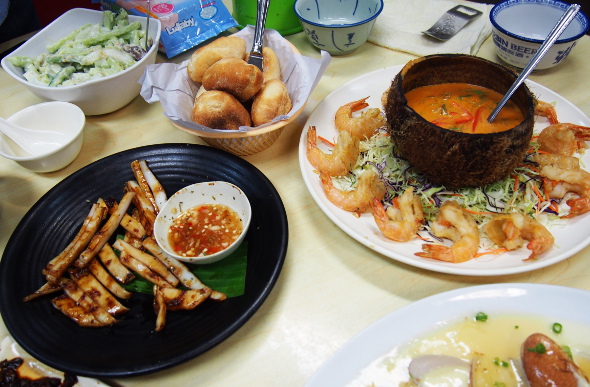 Keep an eye out for restaurant owner Robby as he moonwalks between the tables of his North Point establishment. He'll probably down a few 'fighting bowls' of beer with you in between servings of fragrant prawn curry and clams cooked in egg. 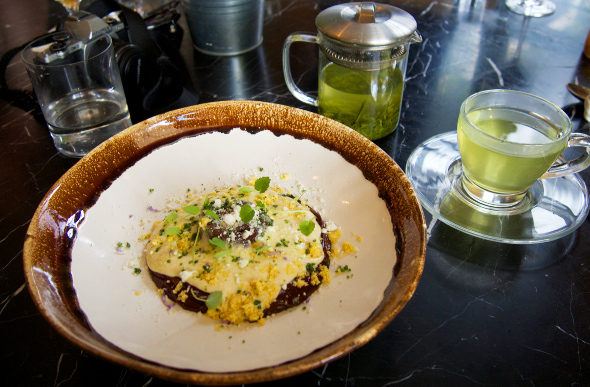 East meets west at The Pawn. Before you head in via the side door, cross the road in Wan Chai and admire The Pawn's colonial facade. It's rare to find this sort of architecture in Hong Kong, balconies and all.

Modern British food with finesse is on the menu at The Pawn and is served in a space that's been impeccably decorated, right down to the silverware. Sit overlooking Johnston Street as you lunch on shockingly green pea and mint soup with a wicked chocolate fondant for dessert and local Moonzen beer to wash it all down. 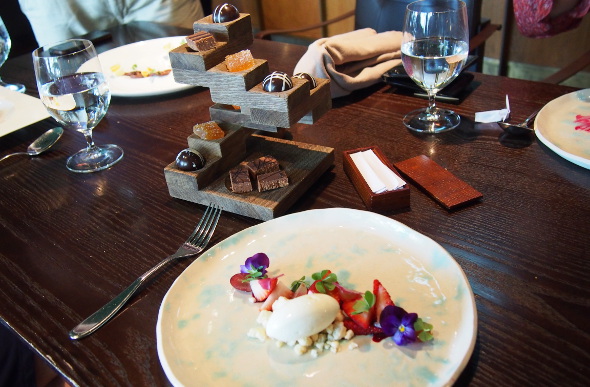 With Michelin-star chef Jason Atherton at the helm, you know it's going to be good. How good? Think slow-cooked pork collar, caramelised apple 'lasagne' and complimentary petite fours I can only describe as a stairway to heaven (shown above).