Rain can dampen any holidaymaker's spirits. And if you think the downpour that seems to coincide with your annual camping holiday is nothing more than bad luck, take a closer look at the calendar - you may actually be betting against the dry weather odds. To help travellers lower the risk of a holiday drenching, Flight Centre has scoured the Bureau of Meteorology's (BOM) historical weather statistics to find the driest months at Australia's holiday hotspots.

"Obviously, weather is unpredictable and there can be no guarantees of clear skies and endless sunshine, but history shows you may be safe to leave the umbrella at home if you travel at specific times of the year," Flight Centre Limited global marketing manager Colin Bowman said.

"This is the case both in Australia and overseas. Our suggestions below are not necessarily the year's driest months at every location, but history shows that travellers can expect low rainfall and a high percentage of sunny days if they take off on holidays to these hotspots at these times." 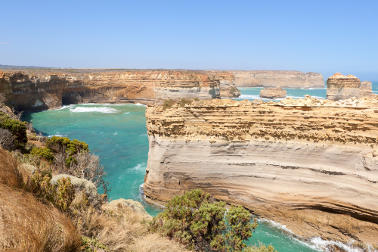 January
At the dawn of the new year, head to Melbourne and the Great Ocean Road. BOM records show that Melbourne receives an average of 47.3mm of rainfall in January, not to mention its highest average temperature (25.9 degrees), while Lorne receives just 39.4mm of rain.

February
Tasmania is at its driest in February, with Hobart receiving just 40.1mm of rain on average during the month. According to BOM, you are also most likely to enjoy more clear days (4.3) than during any other month. Adelaide is also a great dry weather bet in February, averaging just 13.5mm of rain.

March
After catching the last of the summer sun on the Apple Isle, travellers can spring across Bass Strait to Geelong, where average monthly rainfall is 34.6mm.

April
In April, you may not need to shelter from the rain underground if you head to Coober Pedy in the South Australian outback. Average temperature is a comfortable 27.6 degrees and average rainfall is just 6.5mm.

May
You'll be a little early for the city's famous motor sport action if you drop in to Bathurst in May, but chances are you will see sunshine. May is the second driest month in Bathurst, marginally behind April.  BOM records show that the city averages 41.9mm of rainfall.

June
The average temperature is a chilly 12.3 degrees, but there's little chance of rain in the nation's capital in June, with Canberra receiving an average 37.9mm of rain.

July
After chilling out in the Canberra sun, head north to Darwin in July. History shows that travellers can expect just 1.2mm of rain on average and the year's coolest maximum temperatures (30.5 degrees). On the way to the Top End, stop off at Uluru, which receives just 9.2mm of rain on average during the month.

August
In August, follow the sun back to the East Coast and stop off in Port Douglas, where average rainfall is just 24.1mm – about 18 times less than travellers can expect during the year's wettest month in Queensland's tropical north (March). Nearby Cairns is also at its driest, with monthly rainfall averaging 27mm.

October
Chances are you won't need the wet weather clothes if you're heading to Broome in October. History shows an average monthly rainfall of just 1.4mm.

November
As the year draws to a close, consider Norfolk Island (75mm) or Newcastle (70.5mm).

December
If you're heading to Lord Howe Island and your Christmas wish is for sunshine, you may just be in luck. According to BOM, the island is at its driest in December (103.9mm of rain on average).