Boston is home to delectable regional cuisine and local breweries, stunning parklands and waterside walks, revolutionary war landmarks and fiercely loyal sports fans. To celebrate the home of the Red Sox, here are five trivia tidbits you might not have known. 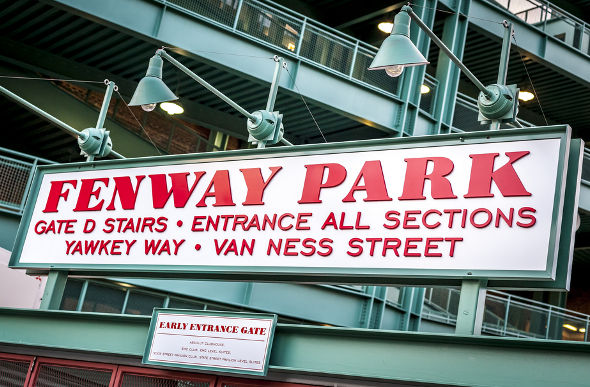 Boston’s beloved baseball stadium, Fenway Park, opened its doors more than 100 years ago, in April 1912. You should try to see America’s game while you’re in the US and there’s no better place to do so than in Boston. Be sure to have a Fenway Frank (hot dog) while you’re there!

If you’re holidaying in the off-season, you can still visit this historic landmark on a tour of Fenway Park. No matter the season, you’ll always find a lively sports scene in Boston, with professional teams including the Bruins (ice hockey), Celtics (basketball), New England Revolution (soccer) and New England Patriots (American football).

In the Copley area of downtown Boston, look to the top of the 26-storey Berkeley Building and you’ll see the coloured lights of its weather tower, which has been indicating the weather since 1950.

However, during baseball season, flashing red lights instead mean that the Red Sox game at nearby Fenway Park has been cancelled due to bad weather. It flashes blue and red whenever the team wins the World Series, which happened in 2004, 2007 and 2013.

The Isabella Stewart Gardner Museum is something special. Named for one of the foremost female patrons of the arts, the museum is housed in an exquisite 15th century Venetian-style palace, with three storeys of art galleries surrounding a magnificent garden courtyard.

You’ll find works here by many of the greats: Titian, Rembrandt, Michelangelo, Raphael, Botticelli, Manet, Degas, Whistler and Sargent. Intriguingly though, the museum claims it was the site of the largest art theft in US history. On 18 March 1990, two men posing as police officers stole 13 masterpieces valued at US$500 million.

A key event in the lead-up to the American Revolution and independence from English rule, the Boston Tea Party was organised by the Sons of Liberty to protest, among other things, “taxation without representation”. Every year, Bostonians reenact the Boston Tea Party at Boston Harbor on the anniversary.

If your visit doesn’t coincide with the reenactment, fear not – you can still visit and tour the floating Boston Tea Party Ships and Museum daily. For more on Boston’s history and its pivotal role in the American Revolution, don’t miss the Freedom Trail: a four-kilometre, red-brick-lined walk that takes you past The Paul Revere House, Bunker Hill Monument (climb to the top for 360-degree views), Massachusetts State House and Faneuil Hall Marketplace.

Boston cream pie is actually a cake, not a pie

Misleadingly named, this delicious sweet treat and official dessert of Massachusetts, is really more of a cake than a pie. It consists of moist sponge cake, custard or cream filling and chocolate icing.