Groove On A Cruise: Music Festival Cruises Around The World

Groove On A Cruise: Music Festival Cruises Around The World

Hankering for a tropical holiday that combines both beachside bliss and live music nights? Why not jump aboard a music festival cruise? From jazz and blues to rock and heavy metal, Pitbull to pop, there are floating festivals cruising oceans right around the world. Take a look at the cruises with beats to float your boat!

John Farnham hasn’t drawn the curtain on his musical career just yet. He’s one of many fine acts to take the stage on the Cruise N Groove, which sails from Sydney to Noumea and Fiji. Or if real 80’s style music is more your jam, The 80’s Cruise takes in Florida, Grand Cayman, Ocho Rios and Cococay with a whole host of 80’s inspired activities, aerobics classes and of course live music. 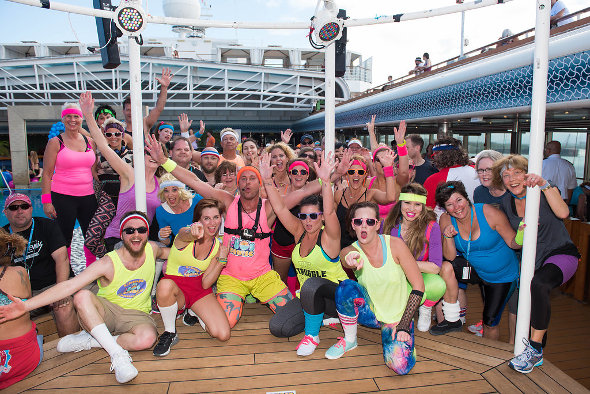 Aerobics at sea. Image courtesy of The 80's Cruise

Dance music and festivals go hand in hand. Combine both with sailing the high seas and you’ve got The Groove Cruise. The Groove Cruise, which sails from Miami to Grand Turk in the Caribbean is the largest floating dance music festival, setting off in January 2017. The 2nd largest EDM cruise festival in the world, It’s The Ship cruises from Singapore through the Straights of Malacca and back in November 2016.

If rock is your sound of choice then a floating festival will not be hard to find – there are more rock cruises than any other kind. Cruising the Caribbean in early 2017, you can hop on Shiprocked, one of the largest cruises, Rock the Boat, or Monsters of Rock. Later in the year, in October 2017, Rock The Boat heads down under with a Sydney to Noumea and Fiji leg too.

Can't wait to be back on Shiprocked cruise once again, I live for that beach life with awesome music :) @shiprocked #shiprocked #beach #rock #metal #chucks #relaxing #concertaddict #musiccruise A photo posted by Jacob Welch (@lexxon21) on Sep 13, 2016 at 3:28pm PDT

Can you imagine anything more romantic than a double bass playing while you sip a drink and sway to the rhythm of the sea? Well that is exactly what you’ll get on a jazz and blues cruise. There are four setting sail in 2017, with the Rhythm and Blues Cruise and The Jazz Cruise both kicking off in January, Keeping The Blues Alive At Sea III in February and Soul Train sailing into March.

Get ready for some heel clicking and line dancing drama because a country music cruise is a full immersion in the western groove. If that sounds like your kind of holiday, take a look at The Country Music Cruise in January 2017, or The Outlaw Country Cruise in February 2017.

The best place to see jazz #thejazzcruise #jazz #marcusmiller #paradise A photo posted by @burwellsax on Jan 29, 2015 at 11:07am PST

Stay above the sway: 7 Tips To Nip Seasickness In The Bud

Those who dare to set sail on a heavy metal cruise know one thing is for sure – you will party hard and need some recovery time booked for when you dock! The largest metal cruise sailing the sea is renowned 70,000 Tons Of Metal, running from 2-6 February 2017. But there are a few more worth mentioning – Def Leppard: Hysteria On The High Seas sailing in January, and Holy Ship, for which you’ll have to wait as 2017 dates are already sold out.

Just confirmed my return as a staff photog for @70000tons 2017! So excited to be onboard once again with all you crazy mofos!

If rap and RnB are more your jam, it’s time to get down with Pitbull, on his Pitbull After Dark Party cruise, setting sail in March 2017. With two shows by Pitbull himself, and a host of other artists over 3 days, you’ll get a taste of celebrity lifestyle in the Bahamas – yes please!

Pitbull After Dark Party now on Sale to the General Public ! Mr. Worldwide along with The Most Bad Ones are taking over the Norwegian Pearl March 10-13, 2017 ! For more information visit pitbullcruise.com #Miami #Bahamas #pitbullafterdarkparty #themostbadones A photo posted by The Most Bad Ones (@themostbadones) on Apr 12, 2016 at 12:11pm PDT