The Beauty Of Himeji Castle

The Beauty Of Himeji Castle

Imagine a pair of gigantic chopsticks 27 metres high, tapering from a diameter of around 97 centimetres at their base.

This, give or take some clever joinery and a lick of plaster, is all that has kept Himeji Castle, one of Japan’s most important historic buildings, upright for the past 400 years through earthquakes, bombing raids and the vicissitudes of time and climate.

I am standing beside one of the 'chopsticks', darkened and polished by the years. They are surprisingly rough-hewn for such an otherwise precision-crafted building.

I mention this to one of my Japanese companions. “Perfection is not regarded as beautiful in Japan,” she admonishes. This is the notion of wabi-sabi, the beauty of imperfection or asymmetry which, it seems, even has a role in a feudal fortress.

The survival of Himeji’s main tower is all the more remarkable when you consider that most of the rest of Japan’s castles are replicas, but even the giant pillars – one fir, one cypress – which provide its core structural support have their limits. 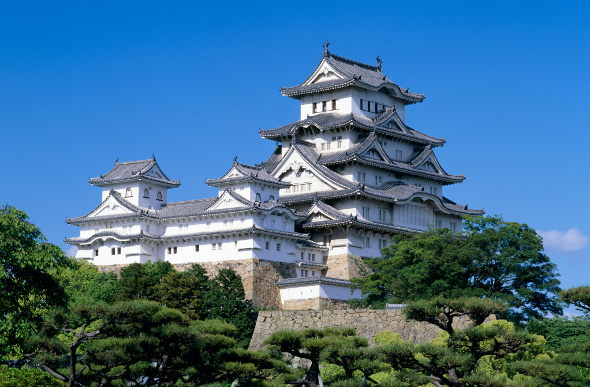 Himeji Castle rises into the sky like the White Heron. Picture: Getty Images

For the past five years this World Heritage Site in the city of Himeji, about 100 kilometres west of Osaka – home to five of the country’s eight designated National Treasure castle buildings (the main tower being one) – has been shrouded in scaffolding during an extensive 24 billion yen ($259 million) restoration. It opened again last month, unquestionably the event of the century in the surrounding town, but also a national news story.

My first sight of the castle comes as I enter Himeji by bus at night. Floodlit, it resembles a ghostly Alp: colossal, jagged, a shimmering, brilliant white.

I explain to the Japanese woman seated next to me that I will be writing about the castle, and she literally applauds – it is the first indication of the immense pride the locals here have in the White Heron, as the castle is nicknamed.

Tokugawa Ieyasu, the great unifier of Japan, ordered the construction of Himeji in 1601, on the site of an existing fort, as part of his strategy to build one castle per province. Ieyasu’s peacekeeping plan was so successful that Himeji’s defences, a combination of moats, baileys, towers and winding, walled alleyways – 83 buildings in all – have never seen combat, unless you count the fight scene in You Only Live Twice, which was filmed here.

If you recall, Bond stays undercover at a 'ninja training camp', necessitating highly dubious 'Japanese' make-up plus an accommodating Japanese bride. Ninja connections to historic buildings in Japan can often be rather flimsy (no ninja has ever set foot in the 'ninja temple' in Kanazawa, for instance), but Himeji is different.

A troop of ninja, the spy caste that originated in the secretive mountain communities of Mie Prefecture, were resident in the grounds of Himeji. As a lower caste of warrior, ninja were not considered worthy of a place in the castle itself, plus their secretive nature kept them apart from the rest of castle life. Nevertheless, the ninja spirit of concealment and stealth is evoked in the design of the castle itself. 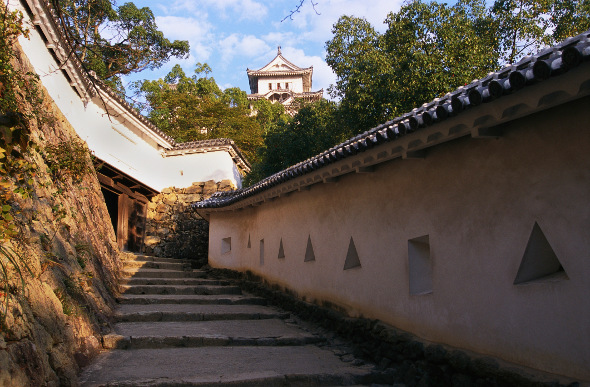 “It was designed so that attackers could be surprised from behind,” my guide, 'Kenny' Kazuya Haga, in heavy black cape and bowler hat, explains. The layout is ingenious, with spiralling paths, blind corners, hidden hatches and 'trick' gates, which could be entirely blocked with rubble within seconds.

The Portuguese had introduced guns to Japan a few decades earlier, and so the castle also has gun holes, as well as archery slits and floor hatches through which one could pour boiling water on attackers (“Never boiling oil,” Kenny says. “It would stain the plaster.”). All things considered, one can’t help feeling that it is almost a shame Himeji’s defences were never tested

With the completion of the restoration, of course, Himeji resumes its place as one of Japan’s major tourist attractions, expected to attract up to 10,000 visitors a day for the foreseeable months. I am the first outsider to see inside the tower since its restoration.

“I am so happy, so excited,” Kenny exclaims as we approach the main tower, passing through 10 gates, with budding cherry blossom and fully laden grapefruit trees alongside. It his first visit since the restoration, too. It is raining hard which, as Kenny points out, allows us to see the complex drainage system which keeps the water flowing through the building – useful in case of fire.

At the main tower, I must put on a pair of those slightly too small, vinyl slippers favoured by the Japanese in such circumstances (partly, I suspect, because foreigners look ridiculous in them) but am surprised to find the rooms inside almost entirely empty. I remember from a previous visit many years ago there being various display cases. These days the interior is kept bare. Picture: Getty Images

“This time, we have removed everything,” said Haga-san proudly, holding up his iPad. “See?” Instead of displays of weaponry and armour, visitors will now download an app that provides an X-ray view of the castle’s woodwork wherever you point your phone or tablet, along with filmed reconstructions of how people lived here. The giant jars which once served as toilets remain in their closets, though, I was pleased to see.

We climb from the basement up through a further six floors, only five of which are visible from the outside, another of Himeji’s sleights of hand. At the seventh floor, there is a lookout, and a Shinto shrine. The view is fabulous.

When it was built, Himeji had three moats, the first more than 1.5 kilometres away from the castle itself, close to where Himeji station now stands, along with a system of watchtowers, and homes for about 10,000 samurai families and, further out in the castle grounds, the troop of ninja.

It took around 10,000 people to build the castle – their labour was a kind of income tax – using pine and granite from the surrounding mountains. That granite base, combined with a highly flexible wooden structure, has helped Himeji sway when earthquakes have struck; apparently those pillars vibrate like a kind of seismic tuning fork.

Unthinkably, in the late 19th Century there were plans to tear down the castle and replace it with army barracks; later, the castle was auctioned off for the equivalent of $3,800, but its demolition turned out to be too costly, and again it survived. The town was extensively bombed during the Second World War, but still the castle stood, as it did through the Great Hanshin Earthquake of 1995. 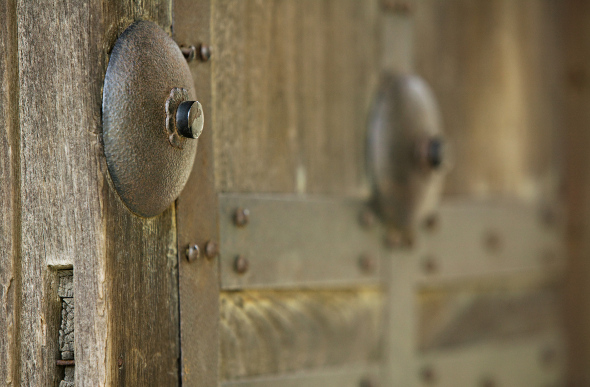 These days, Himeji Castle is a national treasure equivalent to the Tower of London, and immense care and money has been afforded its restoration. Artisans from across the country have been employed to create replacement clay tiles, and attend to the woodwork and the plaster.

All efforts have been made to recreate the techniques of the past and use natural materials but there have been some advances: now the ceramic roof tiles are joined by a far stronger cement, made from boiled seaweed and powdered shells.

Those chopsticks have received extra special attention, too. One is original, a single piece of cypress. The other was replaced during a previous restoration 50 years ago. They found a fir tree of a suitable length, felled it, and began to transport it from the mountains.

But despite the technical advances of 350 years, they could not bring it to Himeji in one piece. It snapped en route and so, today, you can see a clear S-shaped join where the repair was made. A perfect wabi-sabi solution.

Visit your local Flight Centre or call 131 600 for more advice and the latest deals on travelling to Japan.

This article was written by Michael Booth from The Daily Telegraph and was legally licensed through the NewsCred publisher network.

Michael Booth’s latest book, The Almost Nearly Perfect People: The Truth About the Nordic Miracle is published by Jonathan Cape. His book about Japanese food, Sushi and Beyond (Vintage) is available in paperback.
more articles from this author