The Hungarian Parliament Building: How To Witness The Magnificence

The Hungarian Parliament Building: How To Witness The Magnificence

Parliaments often are the settings for ugly behaviour, yet the buildings themselves sometimes are extraordinarily beautiful. Few political arenas in the world are as majestic, inside and out, as the Hungarian Parliament Building.

Owning a commanding location by the edge of the Danube River in downtown Budapest, it has become one of the icons not just of the capital city but of the nation itself.

As I leaned on a fence on the opposite side of the river, the Parliament’s illuminated facade reflected off the water in the fading evening light. 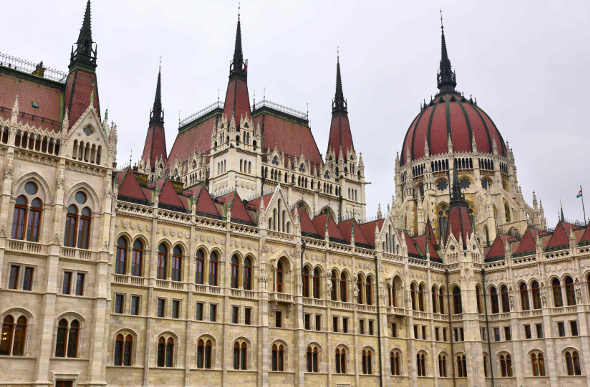 Beguiled by its intimidating size and gorgeous architecture, I stayed transfixed for at least five minutes. When I finally looked away I noticed that, all along the river’s edge, people were replicating my actions, gazing in silence at this splendid structure.

It is not easy for a building to stand out in this manner in downtown Budapest. This central part of the city, flanking either side of the river, is one large UNESCO Heritage-listed site, home to an array of remarkable historical structures.

Budapest was formed when three neighbouring cities merged in 1873 and soon after it was decided that a Parliament should be built in its heart as the political hub of the country. More than a century later it remains the coalface of Hungarian politics. 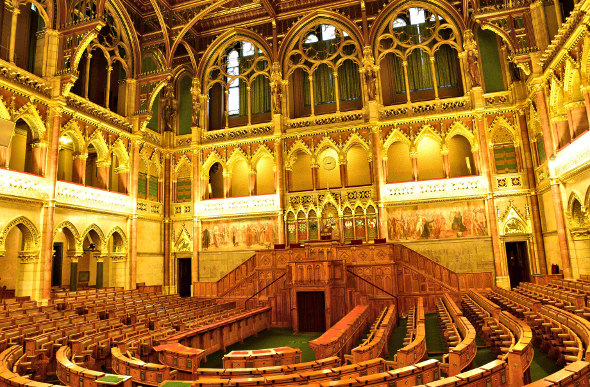 As well as protecting the Hungarian Holy Crown within its walls, it is home to the country’s legislature, a workplace for 199 Members of Parliament and the base of the Hungarian Prime Minister’s office.

Even with all these politicians on site, there remains plenty of space for the thousands of visitors who filter through each day on guided tours.

These hour-long tours are conducted in multiple languages, including English, and offer participants access to the highlights of this grand Parliament. A tour of the entire building could take days such is its extraordinary size. 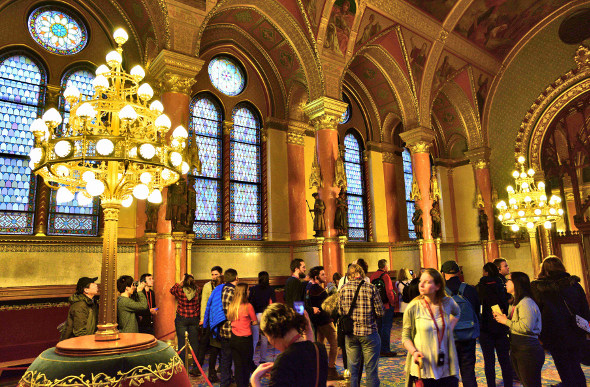 Thousands of visitors funnel through the Parliament every day on guided tours (Image: Ronan O'Connell)

With a floor space of 18,000 square metres, thousands of workmen were required to construct it, many of them master craftsmen who specialise in woodwork and stonemasonry.

Almost 40 million bricks were laid and some 30,000 cubic metres of carved stone used in its decoration. Much of this stone was used for the 162 intricately-carved statues which embellish the Parliament’s interior, and the 90 sculptures that adorn its facade.

Even more incredibly, about 40 kilograms of 22- and 23-carat gold was utilised, adding to the opulence of the Parliament.

Arriving through any one of the building’s 27 entries, visitors will be impressed by its symmetrical layout, which sees its wings intersect, forming a cross shape, with the building’s gigantic 96-metre-high dome marking this confluence. 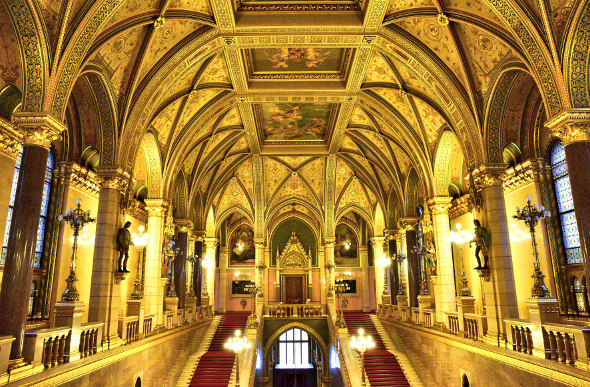 About 40 kilograms of gold were used to decorate the Parliament (Image: Ronan O'Connell)

Further underscoring the enormous amount of materials required to construct the building, the red carpet which lines its hallways is almost three kilometres long when combined.

Its main wing, which runs parallel to the Danube, is longer than London’s House of Parliament at 268 metres, expanding to 123 metres wide.

So massive was this construction project that it took 17 years to build, finally completed in 1902. This was a time of major development for Budapest, which also saw the construction of other landmarks such as the chic Andrassy Road, impressive Heroes’ Square, the West Railway Station and several of the city’s renowned Danube river bridges. 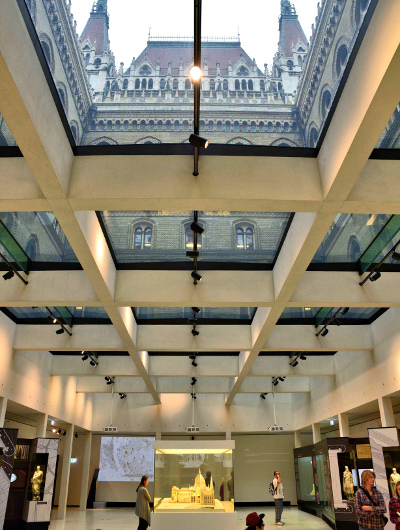 The museum in the basement of the Parliament (Image: Ronan O'Connell)

The Parliament is not just grand in scale but also in appearance. Its style is truly eclectic, fusing trademarks of various schools of architecture.

Its striking Gothic Revival facade is topped by a Renaissance-style dome, and conceals a Baroque-inspired interior. These descriptions may not make sense to those who are not architecture buffs, so I will describe it in one word: Magnificent.

Visit your local Flight Centre store or call 131 600 for more advice and the latest deals on travelling to Budapest.