In Search Of Paititi: Lost City Of The Incas

In Search Of Paititi: Lost City Of The Incas

Rain drummed on the roof of the rough-board shack – the only watering hole in the Amazonian hamlet where we’d got stuck. A one-car town, and the car had a flat battery. While we nursed our Inca Kolas and waited for a lift, talk turned inevitably to lost cities of gold.

“The Incas worshipped three animals,” Fernando, our guide explained. “The condor, the jaguar and the snake. Cusco, their capital, is built in the shape of a jaguar. Machu Picchu is like a condor. So where is the snake?” 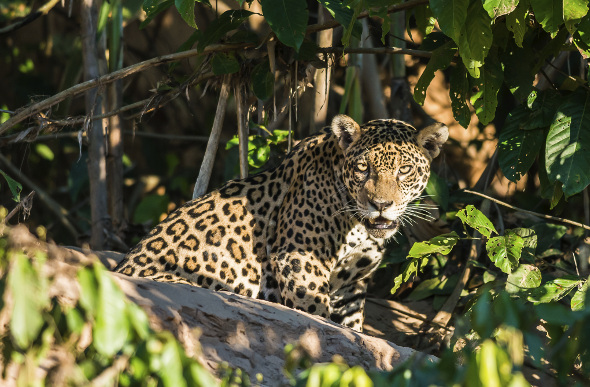 A jaguar near Rio Madre De Dios - the Incas revered them (Image: Getty)

According to legend, and a scrap of parchment discovered in the Vatican archives in 2001, it might be where we’d come: deep in the Peruvian Amazon, where the rainforest runs up against the Andes. The lost city of Paititi, final redoubt of the Incas; a real-life El Dorado in some of the last uncharted territory on the planet.

Those legends have captivated me since I was a child, since I first saw Indiana Jones sizing up that golden idol in Raiders of the Lost Ark. Thirty years on, I channelled that fascination into a novel about a group of treasure hunters seeking Paititi: a thriller with echoes of Joseph Conrad, Alistair Maclean and Rider Haggard.

But those authors lived lives of high adventure. The wildest part of my day is usually the school run.

I had to get out there. I didn’t expect to find a lost city, but I wanted to see the next best thing: the Pusharo petroglyphs, a rock face covered in mysterious carvings.

Only a dozen tourists a year make it to this enigmatic monument. No one knows who made it, or what the intricate designs mean, but it’s reasonable to think it might signpost the way to Paititi. That was good enough for me. 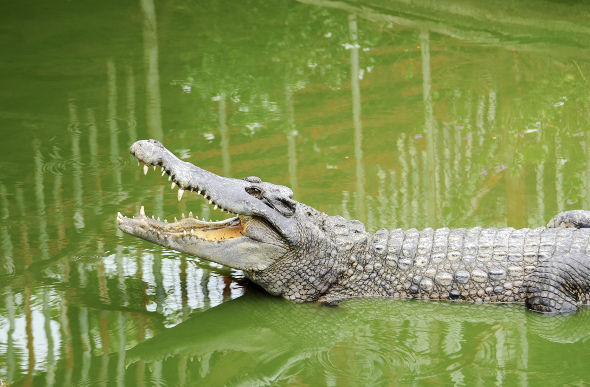 They don't come out of the water ... because the jaguars might eat them (Image: Getty)

I headed to Peru with my friend Kevin, a GP. It’s fair to say he was apprehensive. For weeks, he’d been sending me webpages with titles like “Top 10 Dangerous Creatures of the Amazon”, and photographs of the fierce Mashco-Piro Indian tribe, who recently emerged from stone-age isolation and killed a local fisherman . “We won’t be going anywhere near them,” I blithely assured him.

We landed in Cusco and met the unflappable Fernando Rivera.

Driving east on dirt roads through the Andes, Kevin quizzed him about the dangers ahead. “Do the crocodiles come out of the water at night?” he worried. Fernando shook his head emphatically. “Of course not.” Kevin looked relieved.

“Because then the jaguars would eat them.”

Deep Into The Amazon

After eight hours, we came around a corner and the track disappeared into a sheer cloud wall. This was the Amazon, the vapour of a billion trees breathing out against the mountains.

As we dropped down, Axl Rose sang Welcome to the Jungle on the van’s stereo. Tendrils of mist hung over a landscape of infinitely receding forested valleys. We’d entered the Manu National Park, a wilderness area only slightly smaller than Wales. 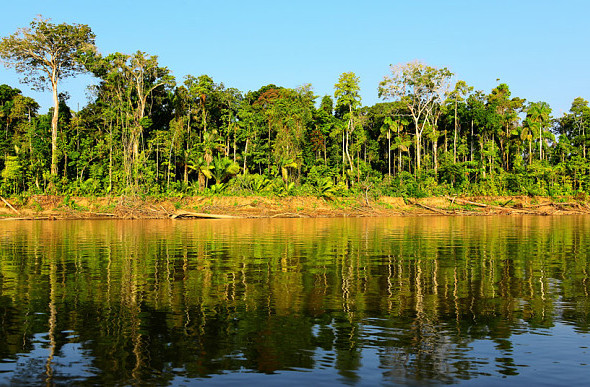 A tiny fraction is open to tourists: the rest belongs to the indigenous Indian tribes. If Paititi is anywhere, it’s probably here.

Next morning, we joined the Rio Alto Madre de Dios, the upper reaches of a river that has more than 4,800 kilometres to go before it meets the Atlantic.

We loaded our gear into a peque-peque, an elongated wooden boat designed for the shallow waters of these rivers, crewed by three Indians from the Matsiguenka tribe.

One sat in the bow with a pole to punt the boat over the shallower stretches. When it got too shallow for that, we all had to leap out and push the boat up the rapids, then quickly scramble in again when we reached deeper water.

Following Fernando as he cut the path with his machete, I felt I was living out the opening scenes of that Indiana Jones film.

We spent a night in the Matsiguenka village and continued on. The motor echoing on the trees made a racket like a thousand parrots squawking.

Soon the river became too shallow to navigate. We beached the boat, and struck out overland. This was the real thing. We waded through thigh-deep swamps, and dodged plants with spikes to make a medieval inquisitor flinch.

Electric blue and green butterflies landed on us. A tree made an inviting handhold, but Fernando warned us not to touch it. Looking closer, I saw a column of red fire ants marching along its trunk. 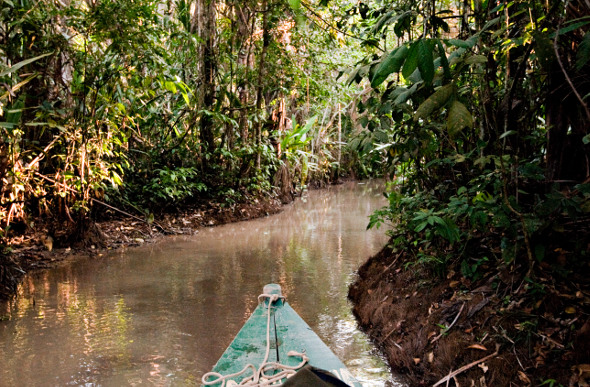 The river wanders through the rainforest (Image: Getty)

Kevin pointed to some tracks in the sand. “Are those jaguar?”

Fernando glanced at them. “Rabbit.”

After three hours, we came out on a riverbank. It was the same river we’d left earlier – and it was instantly clear why we couldn’t have brought the boat. A sunken peque-peque lay midstream, its gunwale furrowing the water.

This is where Forrestal cashed in, said Indiana Jones in my head.

The River Rose Up And Washed Our Raft Away

All day, the jungle had been flat and featureless. Now, from nowhere, a vast cliff reared up out of the trees. For all my research, I’d had no idea the Pusharo petroglyphs site was so huge. The rock must have been 30 metres high, though only the lower level is carved.

There were labyrinthine swirls, and figures with strange heart-shaped faces; zigzag lines and three suns, the Inca emblem that seemed to trace its arc across the sky.

I stared at them, searching for clues, until a tropical storm forced us back to the village. 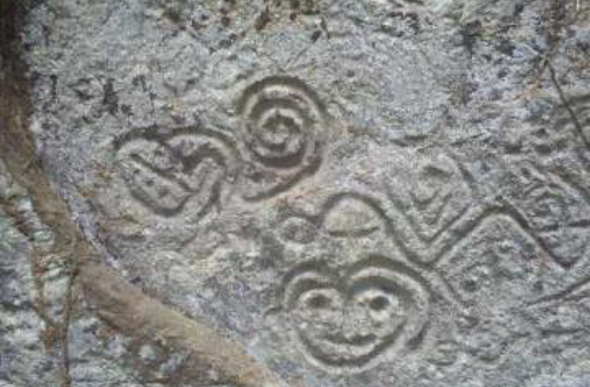 We were supposed to travel the next leg on a balsa raft, but the river rose three feet overnight and washed the raft away

Luckily, a woman called Virginia in the queue for the village radio offered to lend us hers. I was soaked through, but the raft turned out to be so close to sitting on water it made no difference.

I’d had visions of Kon Tiki; instead, it was like riding a stick of chewing gum. When we hit rapids, water sluiced right over it. But that was a small price to pay for such a blissful mode of transport: a river’s eye view of the jungle, without the constant hammer of the peque-peque engine.

We’d left the Matsiguenka and reached Amaracaeri land. “The Amaracaeri are not so reliable as the Matsiguenka,” Fernando explained. As if to illustrate the point, we reached the next village and discovered our driver hadn’t shown up.

With the river running high, he’d decided to go fishing. And the only other car in town had a flat battery.

We waited in the porch of the village trading post, while Fernando spun tales of the expeditions he’d guided to find Paititi. If anyone ever does make it, chances are Fernando will get them there.

From adventurers following old Inca trails, to amateur explorers with a hot tip, to cultists looking to commune with aliens, he’s guided them all. By the time a park ranger drove by and offered us a lift, Kevin and I were ready to abandon the rest of our itinerary and strike out for El Dorado. 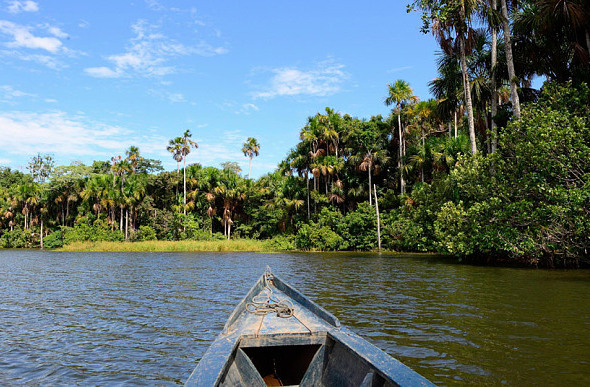 The only way to travel (Image: Alamy)

But it’s lucky we didn’t, because two hours later the rain had stopped and we were sipping beer in a hot tub.

The Amaracaeri Lodge stands near a natural pool fed by hot springs. Diego, the owner, has constructed a Heath-Robinson superstructure of hollowed-out logs and bamboo tubes that bring cold water from a nearby stream. Bats buzzed the water as our blistered limbs soaked up the heat.

The river broadened out as we left the Andes behind in another peque-peque.

This Was Where They Killed The Fishermen

“Now,” Fernando explained, “we come to Mashco-Piro territory.” He showed us some photographs he’d taken of the reclusive tribesmen, and I froze. They were the same pictures Kevin had found online – and, as Fernando went on, I realised this was the very place where they’d killed the fisherman. He’d been a friend of Fernando’s.

Kevin scanned the undergrowth with his binoculars and urged Rey, our boatman, to keep well away from shore. Even I felt a shiver of anxiety.

All we saw was a pair of macaws.

That night, a spectacle owl watched from the trees, while a passing crocodile’s eye gleamed red in Fernando’s torchlight. Kevin slept badly, lying awake gripping his Swiss Army knife because he was convinced he’d heard a jaguar. 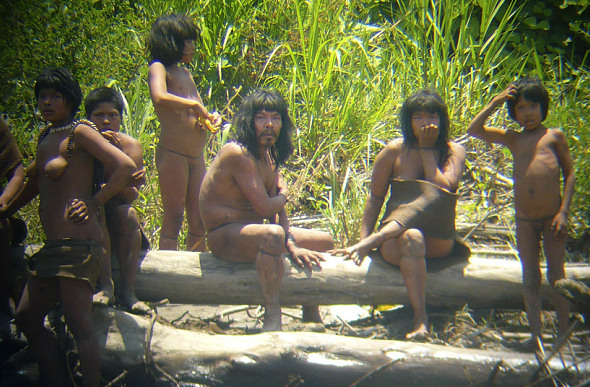 The people of Mashco-Piro (Image: Alamy)

We were up again before dawn. A capybara scuttled away as we glided up the creek; hundreds of parrots and macaws mustered at a clay lick to peck minerals out of the soil. Golden monkeys swung through the primary forest canopy. We stood among the roots of a giant kapok tree so big you could park my house in it.

But then it was time to leave the river. Another day’s journey downstream, Colorado is a gold-mining town straight out of the wild west: mud streets, squat weatherboard houses, and gold-miners looking to stake their claim.

Except the horses had turned into moto-taxis, and the saloons were all showing World Cup football. As I lay in my hostel room reading Treasure of the Sierra Madre, I wasn’t sure any more which world I was in.

Two days later, sitting on the plane heading for Lima and then home, I looked down into that vast expanse of forest and cloud. Somewhere in there, there’s a lost city still waiting to be found.

This article was written by Tom Harper from The Daily Telegraph and was legally licensed through the NewsCred publisher network.