How well do you know the city of London? These gems of the Thames – 80 in total – are the arty heart of this ancient city. If you’re planning a holiday to the United Kingdom, keep an eye out for the islands of London that keep to themselves. 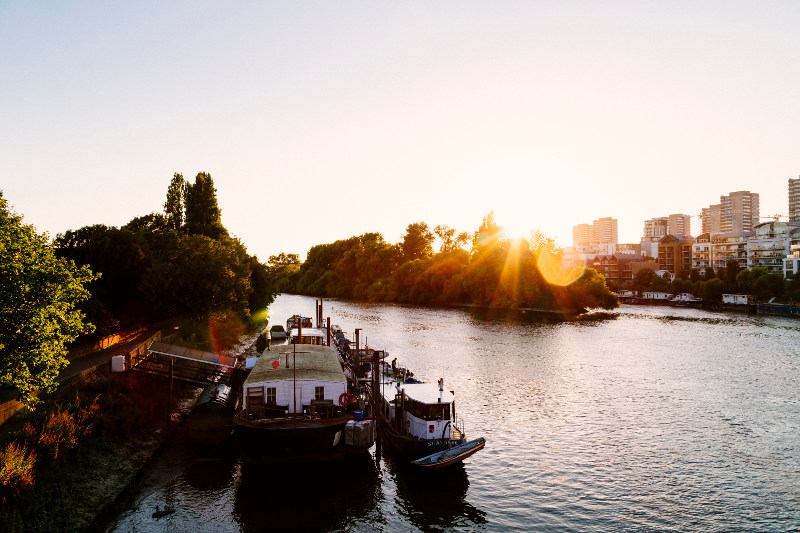 Strolling along the banks of the River Thames, you might spot the odd clump of floating forest or wonder at a footbridge that seems to lead nowhere in particular. The water flows around tiny wooded mounds, moulded from mud thrown up by the river. There are larger landmasses shaped like the eye of a needle, formed by the water forging a parallel path.

These are London’s eyots or aits – 80 secret islands including nature reserves, privately owned retreats and secluded communities moored by the mainland. While some are out of bounds, many can be accessed via public footbridge or by boat. It’s worth the effort, because visiting these eyots unearths history, culture, and a cast of characters from hippies to herons. 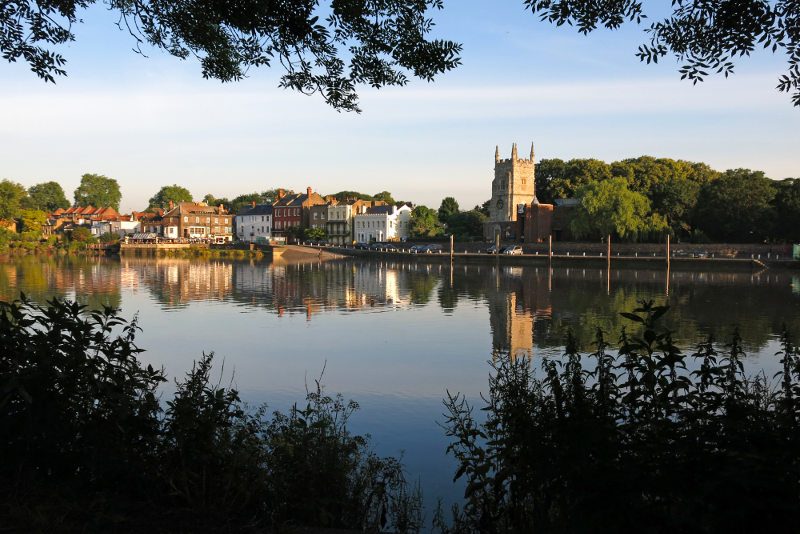 Isleworth Ait is on the tideway and faces Old Isleworth, once a Saxon settlement. Image: Getty

Twitchers (birdwatchers) will be all in a quiver on this teeny nature reserve, home to kingfisher, swift and heron. The rarest inhabitants are the less prepossessing German hairy and two-lipped snails, threatened species of mollusc. This nature sanctuary, dense with willow trees and carpeted with wildflowers, is also a survivor: five neighbouring islands have been swallowed by the river. Close to Richmond station, the ait can only be accessed by prior arrangement with the London Wildlife Trust. 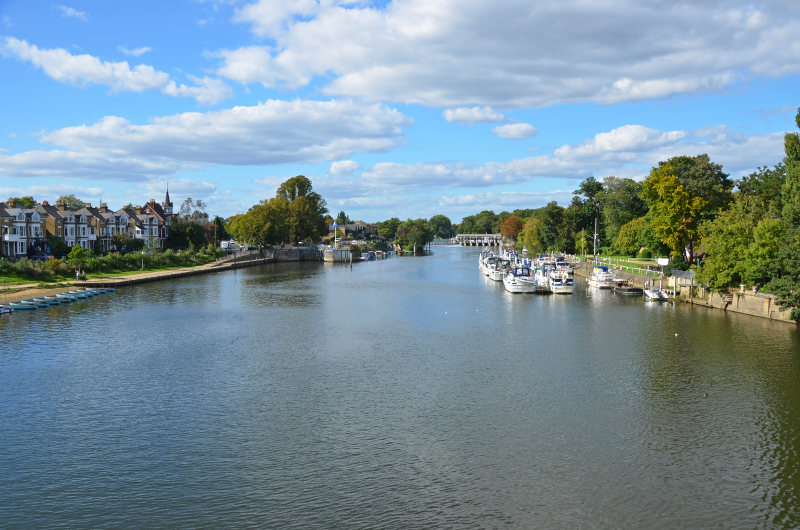 Previous occupants include rowing clubs, sea cadets and squatters. Now Ravens Ait is a sleek wedding venue. Book tickets to public events, including Sunday barbecues and open-air cinema nights, to access the manicured lawns. With beanbags and glow sticks to summon bartenders, it’s like lounging on a tree-studded cruise ship. From the riverbank (a 10-minute walk from Surbiton station), simply wave across to the friendly ferryman. He’ll scoot over to pick you up. 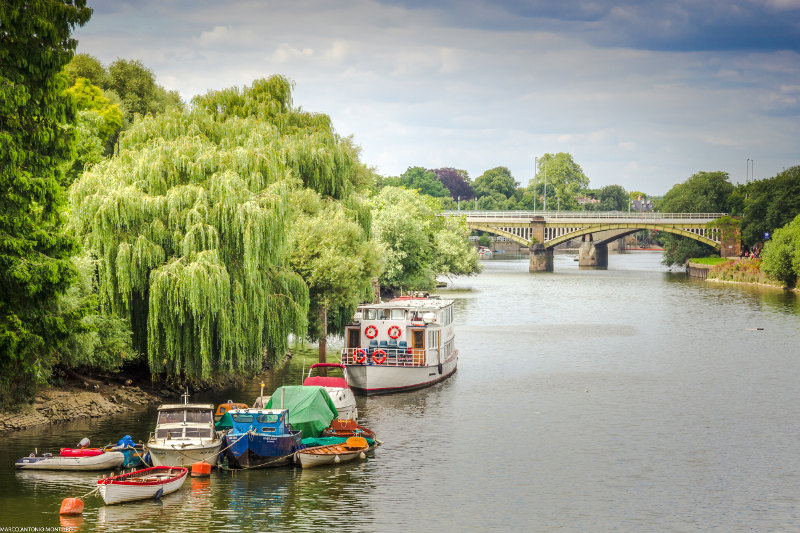 Depending on the time of day, your view of Chiswick Eyot might be a densely forested oval or a few lone branches reaching eerily from the water. The nature reserve, a 15-minute walk from Stamford Brook station on the District line, is almost fully submerged at high tide. At low tide, walk from the riverbank to greet the locals – herons, cormorants and Canada geese. Download the free PLA Tidal Thames app to avoid getting stuck
– and wear wellies. 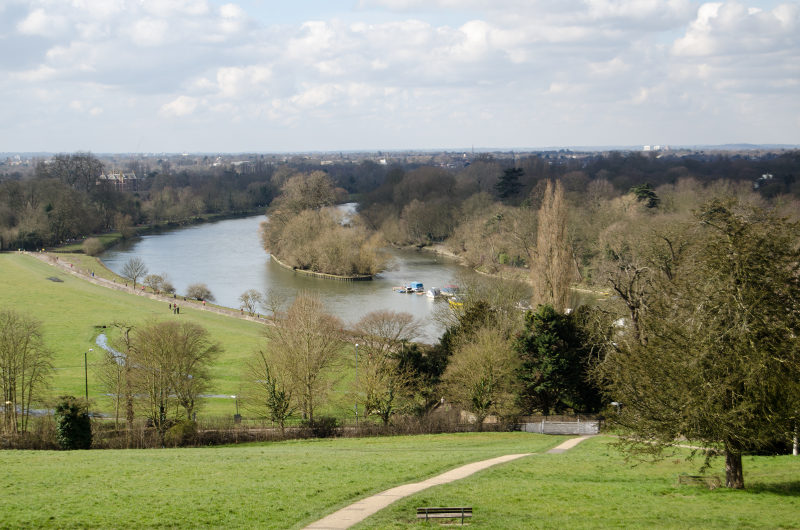 The view of the River Thames and Glover's Island from Richmond Hill is so famous, it's protected by an Act of Parliament. Image: Getty

This teardrop-shaped island has a sorrowful history, with several hotels falling victim to severe floods and wartime austerity. Now it’s a haven for its 100 residents, whose houseboats bob around a central lagoon. It’s also one of the more welcoming eyots – there’s a 'welcome' sign, for starters.

Close to Hampton station and accessed via a bridge, you can loop the island on foot, passing floating homes and gardens filled with wild roses, lavender and bamboo. Cross the small footbridge that spans the lagoon to reach a clearing with benches – a lovely spot to soak up the peace (and pretend, for a while, you live here). Look out for its tiny neighbour, Duck Eyot, named for the birds snoozing in its three weeping willows. A short walk from Twickenham station, a moss-green footbridge loops across the river to a privet-edged path. Past cute cottages, including the intriguing ‘Love Shack’, a working boatyard leads to a clearing dotted with shop dummies (one clad in leopard print, others with plant-pot heads).

This island was an unlikely music hub in the 1960s. Rod Stewart and the Rolling Stones were among those who performed at the Eel Pie Island Hotel, which was destroyed by a mysterious fire in 1971. Now there are around 50 homes and a clutch of artists’ studios. Michele Whitby, who rents a houseboat moored by the island, is behind a museum celebrating the island's history that is due to open in the UK summer in Twickenham. It’s okay to pop over for a peep (just don’t wander into anyone’s garden uninvited) and there are open weekends in summer and winter.

Ella is a freelance travel journalist based in London, and writes regularly for the Daily Mail, Travel Weekly, Aspire, Global Citizen and Fabulous magazine.