A roar erupted at the Yangon ring as the home champion ploughed a right hook into his American opponent's face, crumpling him to the canvas in the opening round of the bone-crunching kickboxing bout.

But for the American fighter, and an increasing number of foreigners, the unvarnished brutality of the martial art Lethwei is the very reason they are seeking out Myanmar, primed for pain and ready to test their fighting skills.

With head-butts among the array of painful blows permitted, Lethwei pugilists say their sport is the hardiest member of Southeast Asia's kickboxing family - even more brutal than Thailand's better known Muay Thai.

Competitors have their hands wrapped but do not wear gloves as they attempt to batter their opponent into submission. A win is by knock-out only. 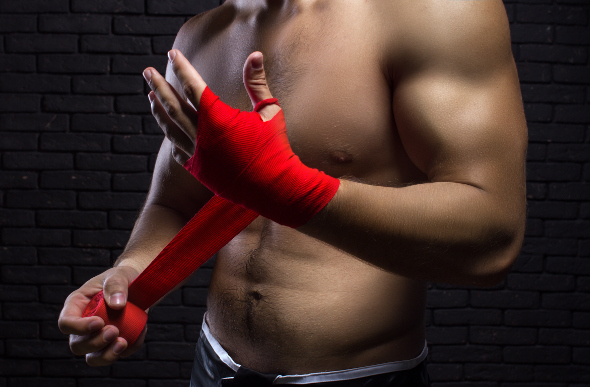 The hands are wrapped but the gloves are off

The American in the ring that night, Cyrus "Black Dynamite" Washington, is among several professional boxers joining the roster. He has competed several times in a country where the sport is booming and the prize-pots are growing.

"Headbutts? Yeah it's dangerous but I think all ways of fights are dangerous," the muscular 33-year-old said shortly before his match against the country's top Lethwei fighter, Tun Tun Min.

"Headbutts, strong kicks and other physical attacks, all are dangerous in the ring."

During Sunday's fight, however, headbutts were the least of Washington's concern. He was felled a little over a minute into round one by a lightning fast right hook from Tun Tun Min.

But Washington knew exactly what faced him in the ring. The Thailand-based Muay Thai specialist has travelled to neighbouring Myanmar with increased frequency and had already met Tun Tun Min twice before, with both fighters notching up a victory each.

He has also had bouts against former national champion Saw Nga Mann and Too Too, another famous local fighter.

Lethwei has an ancient history in Myanmar. Carvings on the temples of Bagan, which dot the central Myanmar plains, appear to show pairs of men locked in combat, suggesting the sport is over a thousand years old. 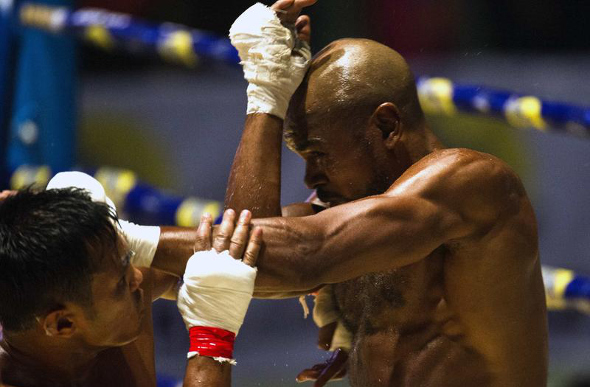 The sport is one of the toughest and fiercest

In the modern era it was kept alive in the eastern border states of Karen and Mon, where kickboxing bouts are held to mark everything from monks' funerals to New Year festivities.

Spectators in front row seats are close enough to hear bones shatter and expect a sporadic showering of blood, sweat and spittle. It is not unusual to find boys as young as 10 taking part in matches.

If no one gets knocked out in five three-minute rounds, the match ends in a draw.

Until recently it was rare for foreigners to fight in Lethwei rings but that is rapidly changing. Zin Lin Htunn, a local Lethwei expert, said the first outsiders began fighting in the mid-1990s, but were mainly from neighbouring Thailand.

In more recent years boxers from Japan, the United States, The Philippines, New Zealand, Australia, Mexico and Costa Rica have followed in their footsteps, usually after training in Thailand. It is a trend that has been partially helped by the country's political transformation from a junta-ruled autocracy into a quasi-democracy.

"They think this is one of the hardest martial arts and to win a Lethwei fight shows how strong they are," Zin Lin Htunn said.

Yangon: No longer the capital but still the gateway. The Golden Gateway To Myanmar

It's not all hard knocks. Kindness All Around In Myanmar

"I fought nine fights in this year and no opponents were from Myanmar," he said. "All are from other countries."

For local fighters like Tun Tun Min, who became the country's Lethwei champion in 2014, foreign fighters help increase the sport's international recognition. Born into poverty and the son of a Lethwei boxer, when he first started out he made as little as 1,000 kyat (76 cents) a fight.

He dreams of bringing his country's style of fighting to the rest of the world. Yet Lethwei has a long way to go before it gains the kind of widespread recognition Muay Thai has in neighbouring Thailand. 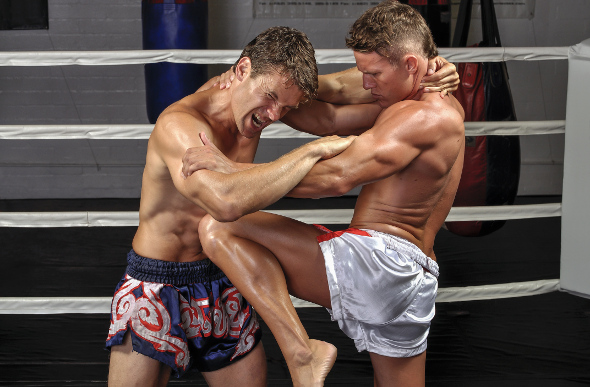 With Myanmar now encouraging large-scale tourism, some of those watching Sunday's fight were themselves outsiders, new to the jarring fight form. Julian Alex, from the United States, had mixed feelings.

"I like Myanmar Lethwei but I would like to see (a) more beautiful fight," he said. "But Myanmar boxers use all parts of the body and they are really courageous."

Visit your local Flight Centre store or call 131 600 for more advice and the latest deals on travelling to Myanmar.