Fifty million people: that’s a lot of faces. That’s more than 500 people for every square kilometre.

You can feel Korea’s energy pulsating through its cities, fuelled on a new-found wealth due largely to computer chips, mobile phones and small cars.

But to discover the heart of the country, you must turn your gaze east. Board a high-speed train for a three-hour journey to the provinces of Gyeongbuk and Gyeongnam. 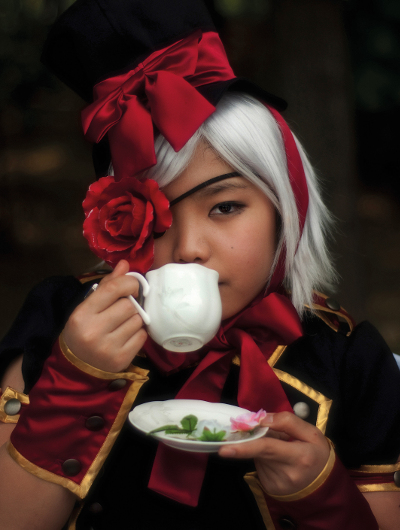 Dessed to the nines for tea Korean-style

Here was the stronghold of the Shilla Dynasty, which ruled this peninsula for a thousand years, and its old money and even older traditions still hold sway in a country governed by ritual and family dynasties.

Sure, you’ll hear stories of the dynasty’s obsession with horses and drinking games, but the provinces’ quiet, forested mountains hide serene Buddhist temples that yield peace and respite from the neon, the traffic, and the sheer business of daily life.

One of the most beautiful of these structures is the ancient wooden Bulguksa Temple. Set on the slopes of the sacred Mount Tohamsan, the temple features ornate pagodas, stone bridges and stately staircases leading to inner sanctums.

From a purely aesthetic point of view, the best time to visit is in autumn, when the forests turn a fiery red and Buddhist pilgrims don simple grey robes to walk the mountain paths, stave in hand, seeking learning and contemplation. 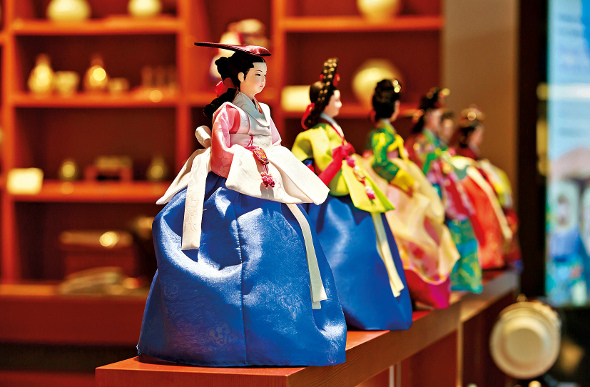 Just four kilometres away, the Seokguram Grotto houses a stately stone Buddha that greets the sun as it rises over the East Sea each morning. The statue and temple are on UNESCO’s World Heritage list, along with nearby Cheonmachong, the 1500-year-old Heavenly Horse Tomb, the most famous of the 200 Shilla Dynasty burial mounds that are spread through the area.

During its excavation in 1974, Cheonmachong yielded the riches of an empire – gold crowns, heroic swords, elaborate saddles and the celebrated painting of a white horse, its winged feet sending it dancing through history. The tomb is 12.8 metres high and 47 metres in diameter: a sumptuous grave for an unknown king.

At Daereung-won Tumuli Park, you can walk through the manicured mounds of 23 royal tombs that shelter sleeping kings and revered queens. 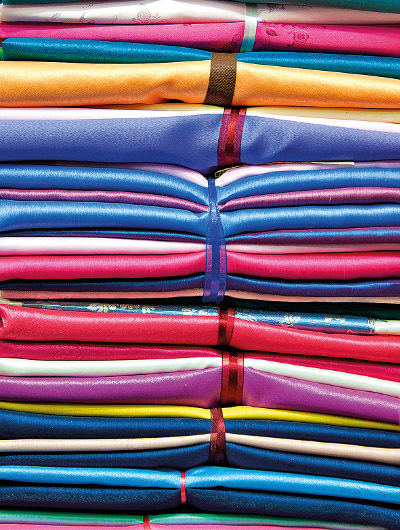 Bulguksa Temple, Seokguram Grotto and the Shilla tombs are high on the list of Korea’s national treasures. But to go to the top of the list, you’ll be returning to Seoul, with its five palaces encircled by fortress walls, a keep that has served as the country’s capital since 1390.

Seoul’s regal history is tangled with skyscrapers, vast street markets, snarled railway lines and the big-city bustle of the daily life of 10 million people. However, number one on the national treasures list is also the easiest for tourists to visit: Namdaemun (also Sungnyemun), is in the heart of Seoul.

One of eight gates leading into the capital of the Joseon Dynasty, the south gate is right beside Seoul Station and the hyperventilatingly busy, 600-year-old Namdaemun market, which trades in everything from ginseng to clothing to flowers and street food, 24 hours a day.

Built in 1398, the wooden gate burned down in 2008: the reconstructed gate opened in 2013, part of a rejuvenation program that also sees Korea exploring and re-examining its own history. 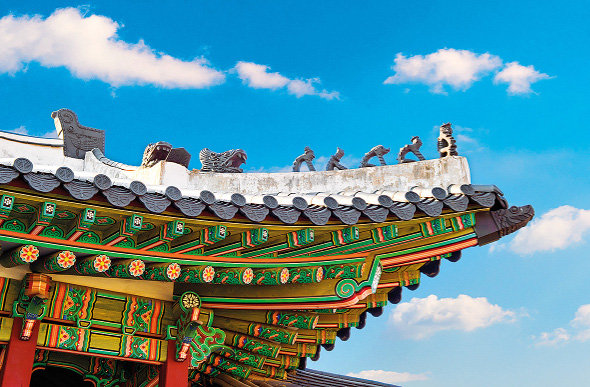 The roof of the Gyeoungbokgung Palace in Seoul

The capital is home to its most expressive museums and historical displays, such as the changing of the guard, six times a day, outside the newly restored Gwanghwamun Gate at Gyeongbokgung Palace. The largest of the Joeson Dynasty’s five grand palaces, it was built in 1395 and burnt to the ground during the Japanese invasion of 1592, rebuilt in 1868 and destroyed yet again by Japanese troops early in the 20th century.

A beacon of Korean nationality, it is undergoing a 40-year reconstruction program drawing traditional craftsmen from across the country. The palace is also home to the National Palace Museum of Korea and the National Folk Museum (and a truly excellent gift shop).

Old Korea isn’t just for viewing through a pane of glass. Just a short walk from the palace, you can sleep in a 100-year-old guesthouse in gorgeous little Bukchon, a traditional hanok district. With their ornate tilt-tipped roofs and whitewash walls, the hanoks curl around a central courtyard, shielded by high walls from the world outside.

During the 500-year Joeson Dynasty, Bukchon was an oasis of calm for many royal members and high government officials. In real-estate speak, it was deemed desirable due to its north-south orientation and its backing by two of the city’s four mountains, highly prized in pungsu (feng shui) principles.

Grab a copy of the walking guide, Bukchon 8 Views, to take in the best scenes of the village, from timeless, curling alleyways to scenes of hanoks and the skyscrapers of downtown Seoul in the background. 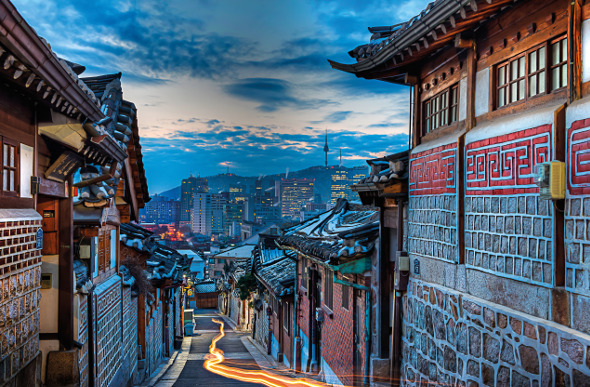 Dawn in the traditional neighbourhood of Bukchon, Seoul

While Koreans love the escape into silence, don’t expect genteel whispering when you visit NANTA, the long-running, non-verbal musical comedy that has been playing to full houses in Seoul since 1997.

The storyline is of a kitchen full of busy chefs trying to create a wedding banquet in one hour. You’re not feeling the history yet? Bashing on their pots and pans, playing with chopsticks and very sharp knives, sending chopped cabbage and onion flying, they’re drumming the samul nori (‘four instruments’) rhythm of Buddhist and farmers’ music. Now you’re feeling it.

To walk in old Korea’s footsteps, follow Seoul’s 14th-century fortress wall. Now on the UNESCO World Heritage’s tentative list, about 12 kilometres of the 18.2-kilometre wall have been restored.

Following the wall will take you up the four mountains that enclose the city. The wall, which in places is eight-metres high, takes you past landmarks of skirmishes with North Korea in the 1960s, ancient gingko trees, and reminders of the Japanese colonial period. You will travel along the route mapped out when the wall was built in 1396.

With thousands of years of history behind it, the Korean aesthetic is not a new one. Design watchers are having a lot of fun with Paul Smith’s flagship store in curved white concrete, and the dramatic, perforated Urban Hive tower, both in Gangnam, while the three Sebitseom glowing artificial islands on the Han River which opened in late 2014 have polarised opinion in the design world. 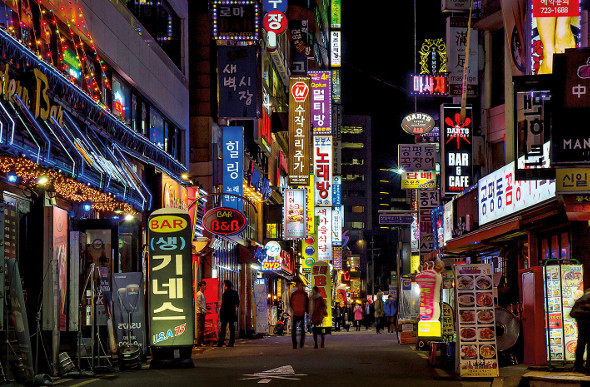 But the pin-up for Seoul’s design coming-of-age is Dongdaemun Design Plaza & Park, designed by British star architect Zaha Hadid. Her signature sinuous curves are not for everyone – as plenty of Seoulites will no doubt tell you – but she blends shopping mall and tranquil park in the centre of the city, tapping into Koreans’ need and appreciation of urban nature.

Despite the millions jostling for space on Seoul’s sidewalks, there is still room to meander. The rejuvenated Cheonggyecheon Stream is a 10-kilometre promenade rescued from no-holds-barred urban development, and returned to the city as an elegant, sculptured escape, part of Seoul’s aim to become ‘a city within a park’.

Keep your eye on the development of the latest project in the series, the Seoul Skygarden – a green overhaul of Seoul Station Overpass, along the lines of New York’s High Line.

Otherwise, get out of town and down to the Hawaii of North Asia, South Korea’s Jeju Island. For some dramatic contemporary design, visit the new pavilions hidden amongst the woodlands of the O’Sulloc Tea Museum, and immerse yourself in the country’s classic tea culture.

Now … drink. Pause. Reflect. Renew. It is the motto a country – and a person – could live by.

Visit your local Flight Centre store or call 131 600 for more advice and the latest deals on travelling to South Korea.

Fear is found on a creaking glacier in the Caucasus mountains and joy is encapsulated in the perfect Shanghai dumpling. And while I love a $500-a-night hotel room (who doesn't?), sometimes the best stories are found in a $20 guesthouse.
more articles from this author