The North Island is home to Auckland and Wellington but there’s more to this New Zealand destination than the country’s largest settlement and its capital city. There are 13 regions outside the Auckland and Wellington city limits – from Waikato to Whanganui – offering travellers everything from weather-beaten beaches and refined fine-dining experiences to active volcanoes, Hollywood movie sets and a wealth of Maori culture.

Northland crowns the northern island, stretching from the outskirts of Auckland to Cape Reinga at the tip of the Aupouri Peninsula, and while most visitors limit their exploring to a sightseeing cruise around the Bay of Islands there’s also a huge dose of history in this corner of the coast.

Russell was New Zealand’s first capital – back in the early 1800s, the now-sleepy settlement was known as the Hellhole of the Pacific and played host to the unruly whalers and mariners that frequented the pubs and brothels lining the streets – with an assortment of historic buildings now accommodating quiet cafes and quaint B&Bs. 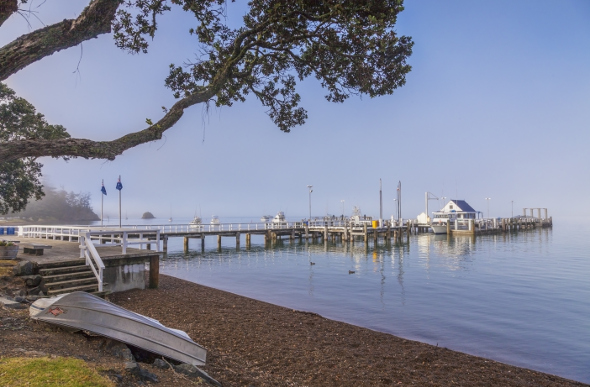 The sleepy town of Russell was once The Hellhole of the Pacific (images: Getty)

The Bay of Islands is also home to the Waitangi Treaty Grounds, a waterside plateau where Maori chiefs assembled in 1840 to sign an agreement defining the rights of the land’s traditional owners, and today travellers can tour the significant site with a guide who is a descendant of an original signatory.

Take A Trip To Middle Earth

New Zealand’s North Island is also the ideal destination for a road trip – by campervan, staying in holiday parks, or jumping from hotel to lodge and B&B to guest house in a hire car – with Hamilton and the Waikato, Lake Taupo, the Coromandel and Rotorua uniting to offer an easy-to-navigate circuit to Auckland.

Eat at a cosy bistro on Victoria Street in Hamilton before exploring the beautiful Hamilton Gardens, then venture into the endless green of Waikato to see the subterranean lightshow at the Waitomo Glowworm Caves and Middle-earth at Hobbiton.

A busy day at Coromandel

Peter Jackson filmed the hobbit movies on a Matamata sheep farm, with the crew leaving the life-sized set in place after production wrapped for travellers to wander the site and see the 44 ‘hobbit holes’ that now dot the landscape.

Explore the geothermal wonders of Rotorua’s Te Puia and spend a day mountain biking around the Whakarewarewa forest or paddle boarding on Hamurana Springs, dig your own personal hot pool in the sand at the Coromandel’s Hot Water Beach and relish the thrill of a jet-boat ride to Lake Taupo’s Huka Falls.

There really is something for everyone on New Zealand’s North Island and, the very best part, it’s only a three-hour flight from Australia’s east-coast capitals.

Visit your local Flight Centre store or call 131 600 for more advice and the latest deals on travelling to Destination.

Sarah Nicholson has been a journalist since 1999, combining her passion for writing and travel full time for the past six years, with work adventures taking her from South Africa's Sabi Sand Game Reserve to the Northwest Passage in the Canadian Arctic. While she has visited 57 countries on six continents, and snapped thousands of photos during her jaunts around the globe, Sarah's heart belongs to Asia with Vietnam topping her list of favourite destinations.
more articles from this author