Honolulu is the throbbing hub of the Hawaiian Islands. It meets many of the cliques you expect, as you watch tanned surfers on the Waikiki shoreline, indulge in tropical Mai Tai's and hit the myriad of malls.  However, it also has a wealth of history and culture, plus experiences like nowhere else in the world!

The boutique cosmopolitan lifestyle hotel, The Modern Honolulu, is the perfect place to experience Honolulu for couples, families and even groups or business meetings. Condé Nast Traveler Reader's Choice Awards 2014 announced The Modern Honolulu as one of the top three hotels in Hawaii.

Located one minute's walk from Waikiki Beach and 20 minutes walk from the hub of the Honolulu, it is close enough to enjoy the fun and flavour of the city, but far enough away to disconnect and relax on your holiday. The premises has two pools, the sunrise pool and the adults-only sunset pool, where you can enjoy sumptuous cocktails or simply soak up the sun. 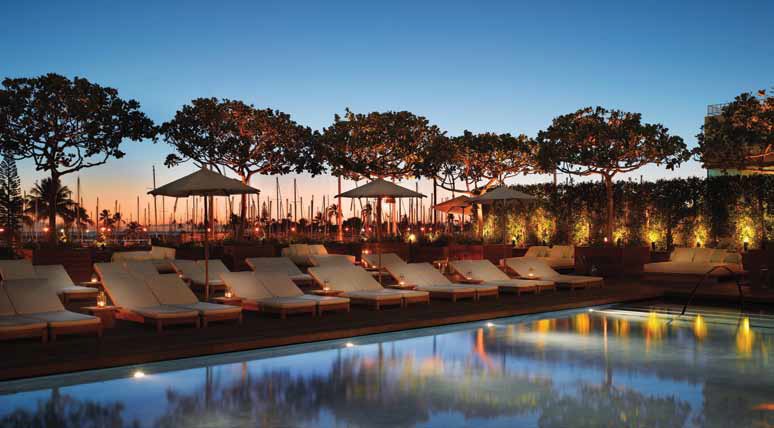 The rooms at The Modern Honolulu will take your breath away, with their beautifully simple luxurious design, plus the unique touch of a ukalalai and selection of sorongs for your use during your stay.

The service is also incredible with smiles everywhere you turn from the helpful team of staff. There are two restaurants within the hotel that will make your mouth water. Enjoy the warm climate poolside with the al fresco seating of The Grove and dine on fresh Hawaiian fish tacos, island style ahi tuna poke, topped off with guava cheesecake whilst sipping a deconstructed Mai Tai, all guaranteed to transform you into the true Hawaiian spirit.

You also have the choice of the acclaimed Iron Chefs’ restaurant, Morimoto Waikiki, honouring the seamless integration of Japanese and Western ingredients with the best seafood from both Hawaiian and Japanese waters, as well as seasonal raw selections, fruits and vegetables. 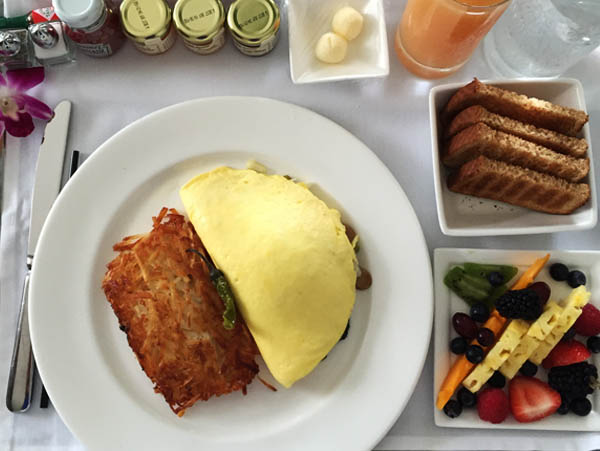 Breakfast of omelet done your way, Russet and Yukon gold potato cake and fresh fruit salad at the Modern Honolulu

A Segway of Hawaii tour is a great way for people of all ages to zip around the city and simultaneously learn about the history and culture of Honolulu and the island of Oahu. The Honolulu History and Culture Tour takes you along Waikiki’s famed Kalakaua Avenue to the Duke Kahanamoku Beach in Waikiki, and then glides past the famous Ilikai Hotel from the original TV-series “Hawaii Five-O”.

Waikiki means 'spouting water', as most of Waikiki was once flooded and used as a fish farm and rice fields for the royal family. Cruise past Ala Wai Harbor made famous from TV’s “Gilligan’s Island,” Kalakaua Avenue, Ala Moana Beach Park, through Magic Island and back to downtown Honolulu.

The segway tour guides have such excellent knowledge of the region, you won’t have a question left unanswered as you experience this exciting, vibrant, fascinating city via Segway. 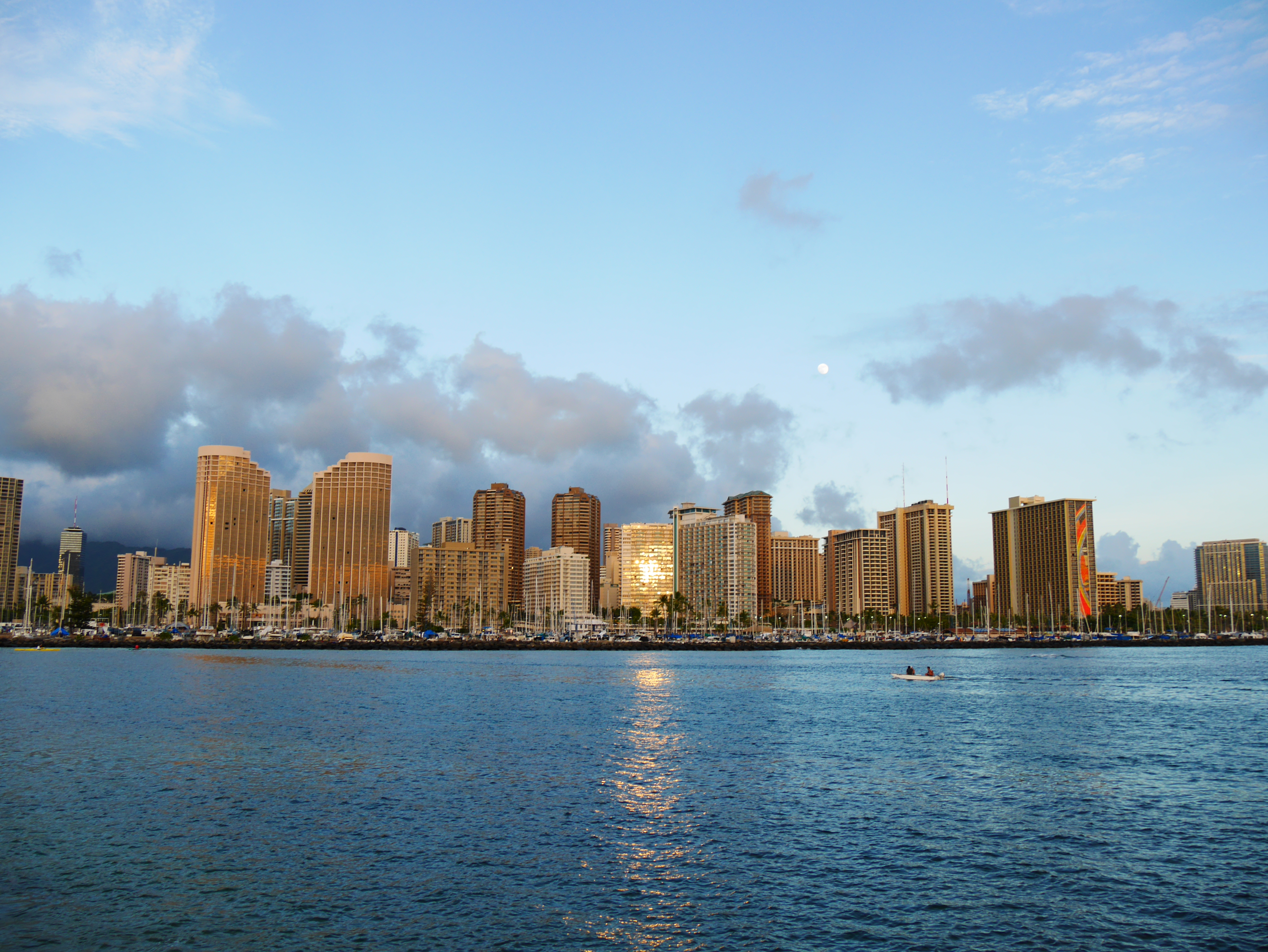 Sunset over Honolulu from Magic Island, Oahu, on the Segway History and Cultural Tour

Another must-do is surfing on Waikiki Beach. The waves just roll on forever, making it the perfect experience for first-time surfers and a must-do for the more experienced. Surfing was actually invented by the Hawaiians and brought to Australia in 1915 by the famous Duke Kahanamoku.

Hens Hedeman Surf School have a team of friendly, patient staff that will have you “hanging 10” by the end of your lesson. You begin the class with a safety video before heading to the east, less-crowded, end of Waikiki.

You then practice the steps of how to stand up on a surf board before putting to into action. It’s such a thrill when you stand up on your first wave. So put your curiosity to the test and give it a go! 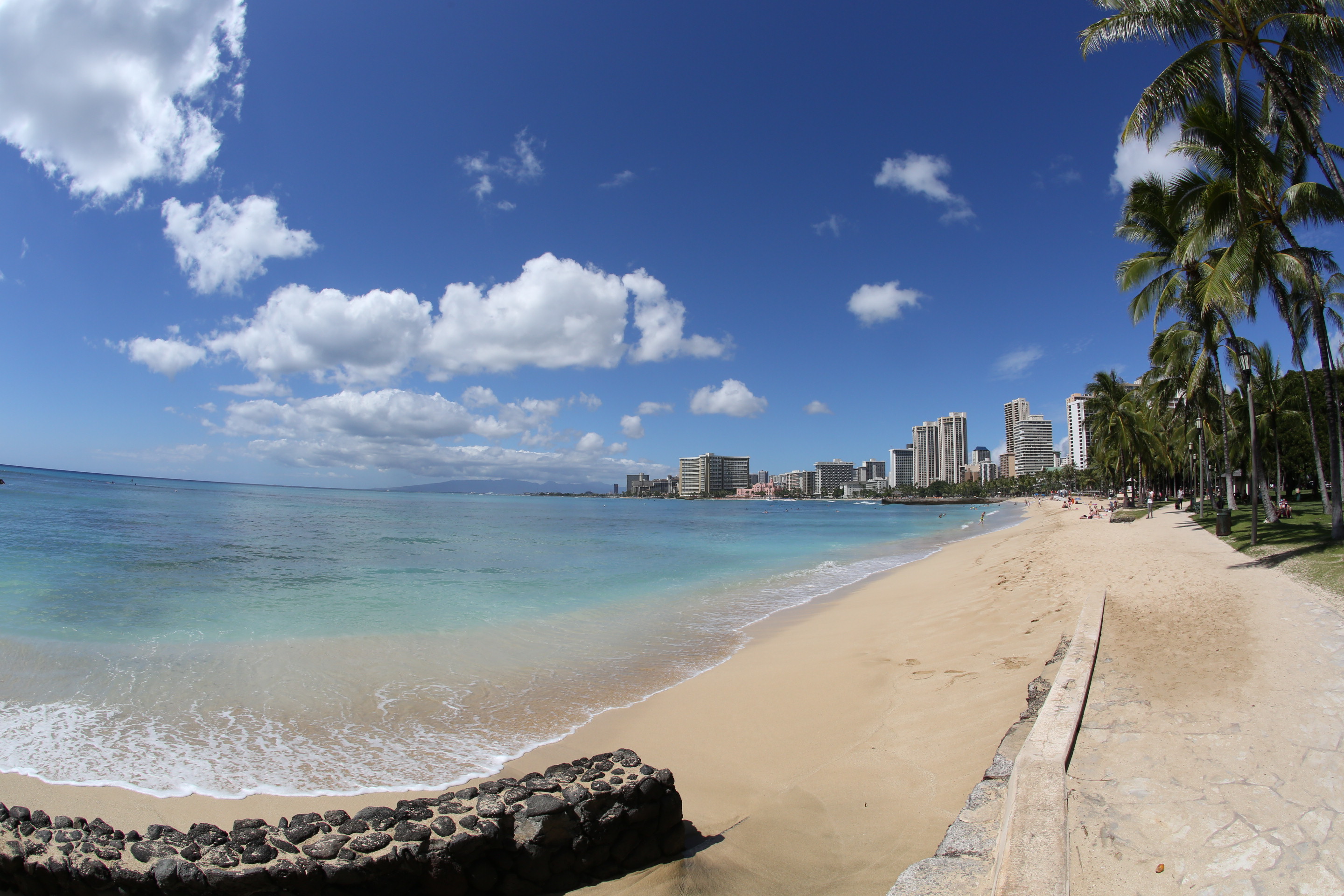 Now this is bucketlist stuff! Swimming with dolphins has to be one of the coolest experiences on this planet, and where else to see it for yourself than in Oahu. With Dolphins Excursions you get picked up from your hotel and driven an hour from Honolulu to the west side of Oahu before cruising for 20-45mins to spot dolphins to swim with.

The Hawaiian Spinner Dolphins are the stars of the show, famous for their acrobatic displays in which they leap and spin in the air on their tail. You will notice when they are tired from spinning, and their white underside goes pink in colour, just as humans do when we are hot and bothered.

The dolphins aren’t shy and love to play, at one stage I was surrounded by a pod of about forty dolphins, some literally only metres from my fingertips. They are such beautiful creatures and to watch them in their natural habitat is simply breathtaking. 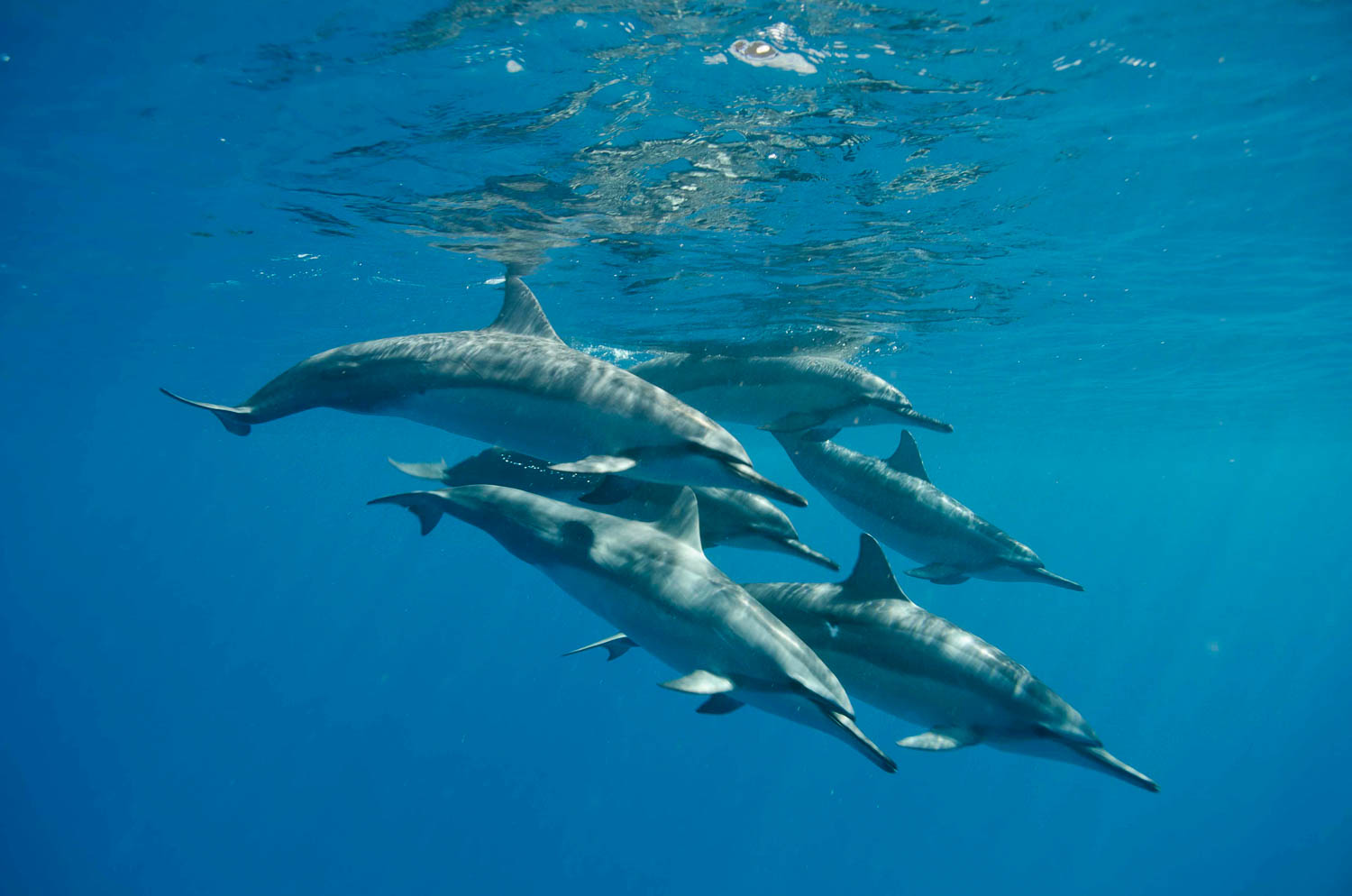 Hawaiian Spinner Dolphins off the west coast of Oahu

Fingers crossed you will also spot Green Sea Turtles, or even Humpback Whales which can typically be seen around the Hawaiian islands November to April. 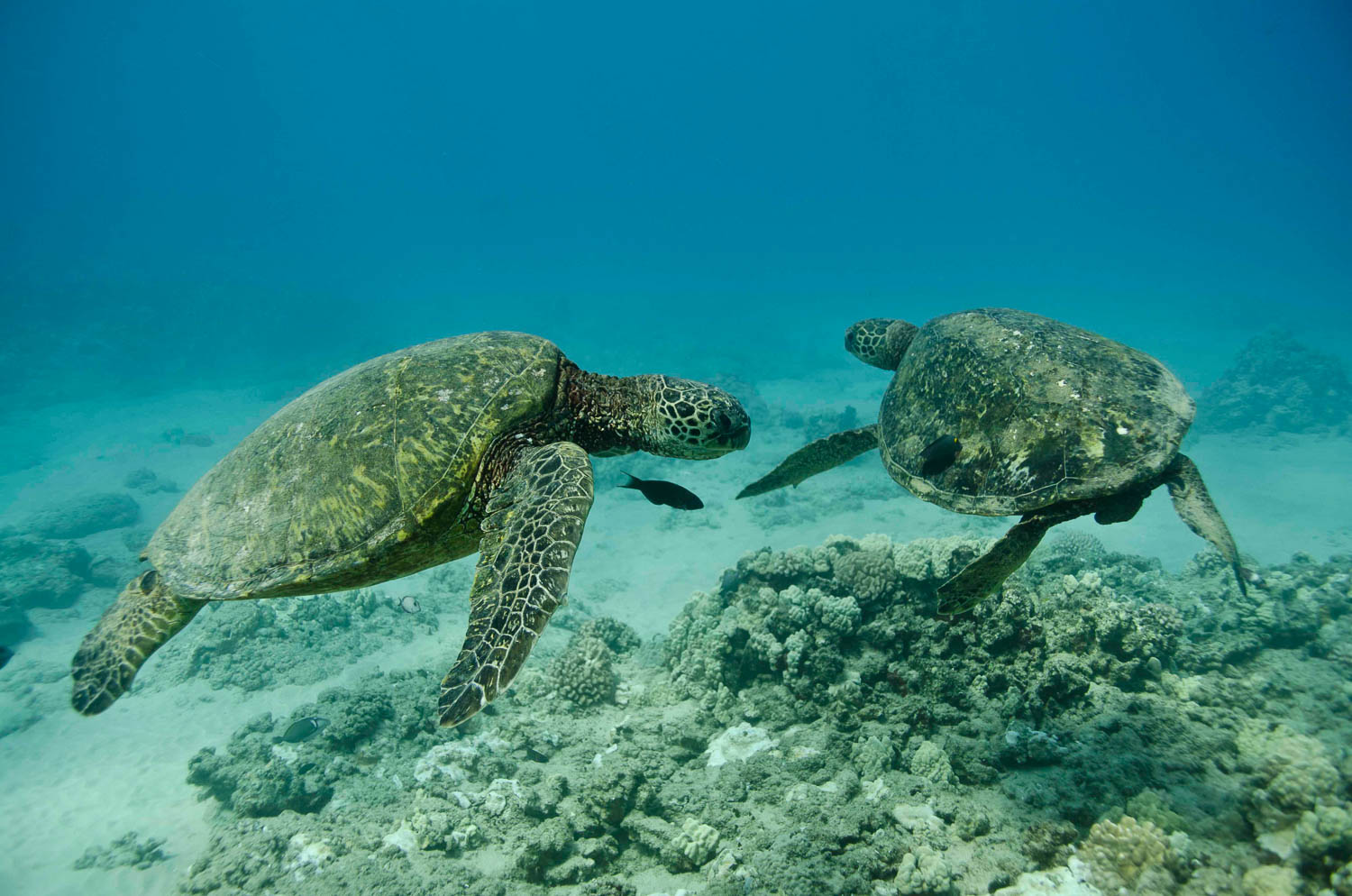 Green Turtles spotted off the west coast of Oahu

Oahu has a lot more to offer than meets the eye, so embrace Honolulu and then escape to the rest of the island to discover the secrets of its culture, history and wildlife that is Hawaii.