Falls Creek has always been known for its family-friendly vibe and ski-in, ski-out resort. QT has bought into both of these with its alpine hotel, while adding its own recognisable touches of elegance, creativity and comfort.

For many, QT Falls Creek's biggest appeal is its location. Whether staying in the hotel's West or East wings, you need only walk 20 metres until you can strap on your skis or board. By that time you're lining up for the Falls Express lift, gateway to multiple blue and green runs, along with the ski and snowboarding schools.

Like its other hotels in Sydney, Canberra, Port Douglas and on the Gold Coast, QT has approached its Falls Creek establishment with a blank page and youthful enthusiasm. 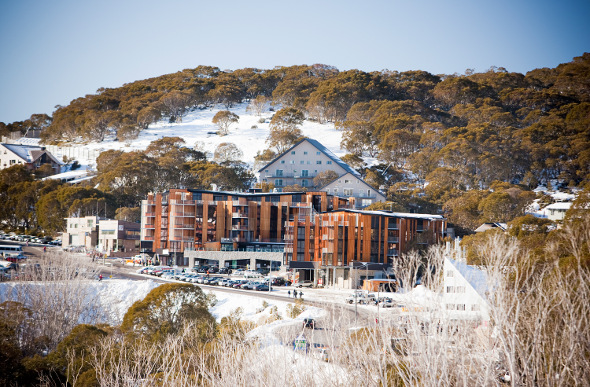 An Apartment To Call Home

Taking a needed break from home life is one of the reasons people travel. However, there are still times on the road when we all miss the little nuances of our castle. QT's three-bedroom apartment has a welcoming blend of foreign luxuries and familiar comforts.

The open-plan kitchen and living area provides more than enough room to swing skis around without hitting the large sofas, television or six-seater dining table. The kitchen itself is fully-equipped with cooking facilities and a fridge large enough for stocking up on food and drink.

Hard to miss is the balcony, which catches attentions almost immediately after the front door opens. To be fair, it is probably the spa on the balcony that has most people temporarily mesmerised, but the view plays its role without fault. (When we arrived curtains of snow were falling in front of the Kiewa Valley mountain landscape.) 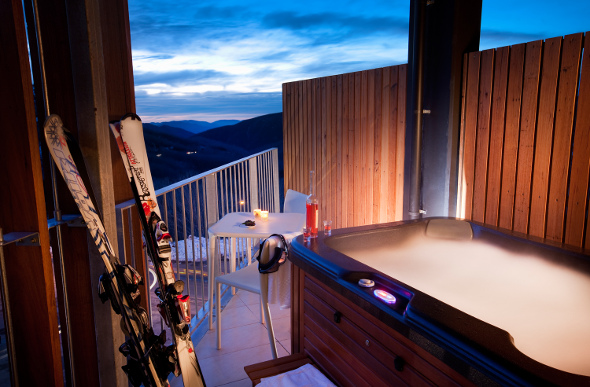 Holidaying in Sydney? QT Sydney Is An Art Deco Dazzler

The spa provides much-needed relief for exhausted muscles after a day on the slopes. It's one of those features you initially don't think is necessary, but once you've had a spa up on the mountain it's hard to live without.

The two master bedrooms come with an en suite each and have a focus on comfort that extends from the carpeted floor to the queen bed and the rain shower head. An assortment of high-end complementary toiletries by (MALIN+GOETZ) means you can leave most of yours at home. The moisturising lotion is possibly the most valuable for its help with wind burn, and should be a necessity in all hotels on the slopes.

The bunk bed in the other room might not be the most sought-after sleeping arrangement, but its long enough for adults and is more accommodating for a pair of children or single travellers than another queen bed.

One of the sofas also pulls out into a bed, giving the apartment a maximum occupancy of eight people. 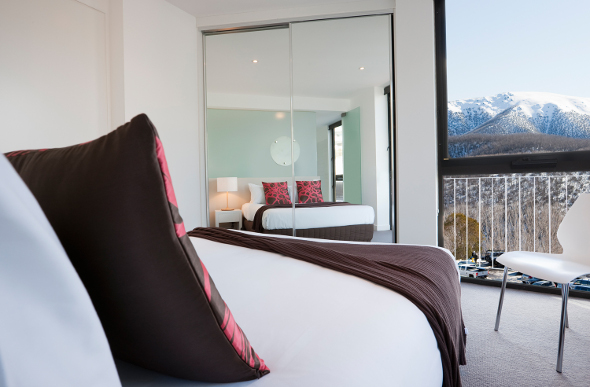 One of the main bedrooms in a 3-bedroom apartment (Image: QT Hotels)

A big part of QT's emergence as one of Australia's most exciting hotel chains is the company's refusal to limit itself to being just a hotel.  Each establishment features multiple dining options that quickly generate popular reviews separate to the hotel.

This is no different at Falls Creek.

The main restaurant, Bazaar @ QT, is a buffet-style marketplace of fresh local ingredients whipped up into a scrumptious assortment of foodie options. The tables are set with an emphasis on fine-dining and the staff provide personal and friendly service.

Although there are enough dishes from the buffet to satisfy most diners, you can also select made-to-order meals from the chef. If you don't know what wine to pair with your sirloin steak or salt baked fish, you need only seek recommendations from one of the waiters. 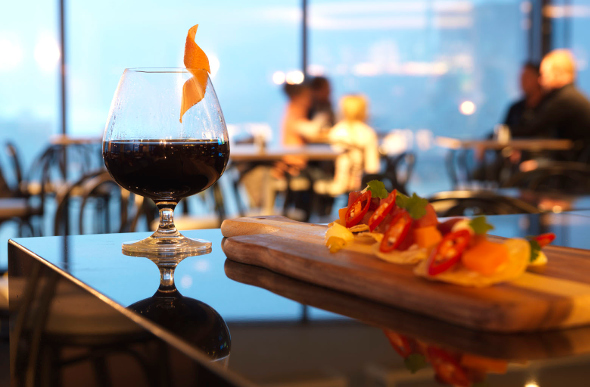 At the bottom of the opposite wing sits Stingray, a bar with nostalgia at its heart. You won't find typical bar food here. The lunch/dinner menu brings creativity to proceedings with pulled pork quesadillas and gourmet burgers.

Surrounded by 50s decorations and historic skiing memorabilia, it's easy to kick back in the cosy ski lodge atmosphere with a cocktail or craft beer.

And A spaQ On Top

Like the rest of QT, spaQ is a little quirky compared to your traditional day spa – in a good way. Instead of committing to a treatment up front, you can schedule an appointment and decide once you arrive.

It's tranquil and quiet. Soft music plays in the background – a combination of rainforest and Indigenous Australian instrumental – while the massage therapist performs one of a variety of rejuvenating treatments.

Active skiers or boarders might be best opting for the Thermal Massage, which targets deep muscles. Body exfoliation and wraps, facial therapies and nail treatments are also available, along with spaQ's signature packages, which last for 150 minutes.

If you prefer some alone time, you can always relax in the hotel's indoor pool and sauna. Or, if you're brave enough, combine one of the two with the outdoor plunge pool, which is essentially an ice bath during winter. 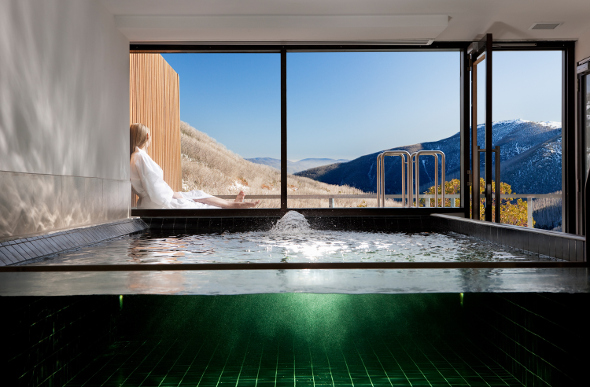 Visit your local Flight Centre store or call 131 600 for more advice and the latest deals on holidays to Falls Creek with QT.