The Taj Mahal is arguably the greatest gesture of love ever made by man.

The Mughal emperor Shah Jahan built this epic tribute to his third wife Mumtaz Mahal who died giving birth to their 14th child in 1631. It was constructed as her, and ultimately his, final resting place. Effectively it is an Islamic tomb; albeit a very fancy one.

Even though the Emperor had several wives and reportedly more that 150 women in his harem, Mumtaz Mahal was the one who captured Shah Jahan’s soul.

A heart-broken Shah Jahan is thought to have ordered construction of India’s most recognisable tourist attraction the year after his wife’s death.

He gathered the world’s best architects, builders and stone masons of his time to Agra, on the banks of the river Yamuna in the northern state of Uttar Pradesh, to build the 171-metre-high Taj Mahal. 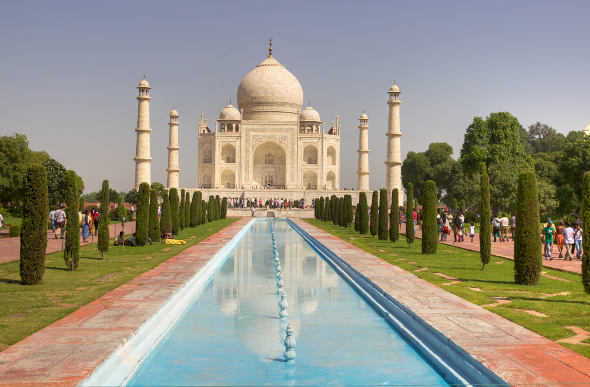 India's Taj Mahal is a masterpiece of love and devotion (Image: Getty)

At least 1,000 elephants and 22,000 labourers were employed over the construction period. My tour guide emphasised the word “employed”, pointing out that many of the world’s other iconic structures –like the pyramids – were built by slaves. "Workers on the Taj Mahal were paid, something India should be proud of," he said.

So good is the workmanship that the four sides of the Taj Mahal are perfectly identical. The building, described by Rudyard Kipling as “the embodiment of all things pure”, was completed in 1653.

No visitor to India should skip the Taj Mahal. Even though there is so much hype surrounding it, the Taj Mahal still manages to exceed expectations.

The building itself is breathtaking. As you walk through the walled red sandstone Great Gate that unveils the architectural masterpiece you cannot help but gasp out loud when you first see the monument’s curved archways, its womanly ice-cream scoop-like domes and the walkway of water that leads most of the 10,000-plus visitors each day to the entrance.

We visited late in the afternoon. The crowds were thinning and the sun was setting on the Taj Mahal’s marble surfaces. When you get up close to the building you can see the inlaid precious stones and the Persian calligraphy on the outside walls.

India By Rickshaw: Wacky Race From Peaks To Beach

India: A Feast For The Senses 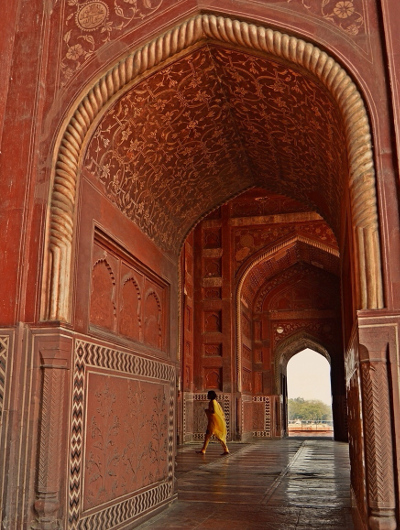 Take time to admire the intricacies of the architecture (Image: Getty)

The Taj Mahal is one of those rare tourist attractions that works from up close and from a distance. As we circle the building it seems to change colour. There is another surprise around each corner.

It’s not all good news for tourists though. To get to the Taj visitors must first navigate the frantic, and daunting local traffic. Don’t try and drive yourself. Get a taxi or a guide, because the traffic is like nothing you have ever encountered before.

Once you reach the West Gate you then have to run the gauntlet of children selling “Taj Mahal snow domes”, deformed beggars, camel drivers beating their camels with whips to get them to move and people just asking for money. This is India though. It certainly is a country that does not treasure “personal space”.

While the beauty of the Taj endures, from a tourism perspective it does sit in complete contrast to Agra – a city of about 1.7 million people. The streets of Agra are dirty, its people impoverished and without the Taj there is little reason to visit. 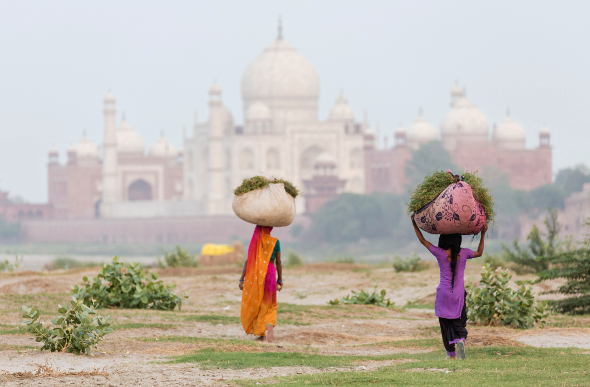 Locals carry supplies with the Taj Mahal in the distance (Image: Getty)

I did attend a Bollywood production though, which added to the experience. The Mohabbat The Taj show at the Kalakriti Cultural and Convention Centre is a fun piece of singing and dancing theatre that retells the story of Shah Jahan and Mumtaz Mahal.

Because it attracts a lot of tourists, Agra does have some very high standard accommodation options. I stayed at the Radisson Blu Agra Taj East Gate, a modern western-style hotel that would not be out of place in Sydney, Melbourne or Brisbane.

It had a great breakfast menu and an Indian restaurant that offered a gourmet curry degustation at a very good price.

Visit your local Flight Centre store or call 131 600 for more advice and the latest deals on travelling to India.

Why You Need To Go On Safari In Sri Lanka
20 January 2020
Flip the script on the traditional safari experience by going wild in Sri Lanka where you’ll find some of the densest concentrations of leopards and
Read Time: 1.7 mins