If you like to be knee-deep in white gold, we have picked 10 of the best snow holiday experiences. Whether you favour luxury surrounds, gourmet feasts and a pumping apres-ski scene; stunning lakes and mountain views; or just damn good ski runs, you'll find something to delight in just about every cool corner of the globe. 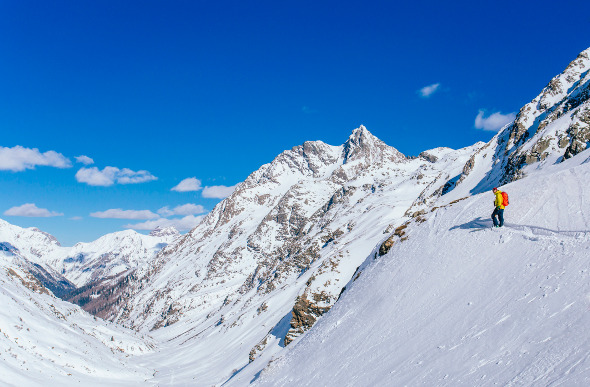 One of Europe's premier resorts, St Anton am Arlberg is an adventure lover's playground.

St Anton am Arlberg is perfect for those who like to ski hard away from the safety of uber-groomed runs. With more than 200 kilometres of off-piste runs across the Arlberg area, powder addicts will be well satiated.

The terrain here is as big and as bold as you want it to be, with hidden forests, open couloirs or nail-biting precipices. Either way, take a guide who knows the area well to ensure you have both a safe and exhilarating time away from the crowds.

Like your skiing and boarding steep and deep? Consider these resorts too… 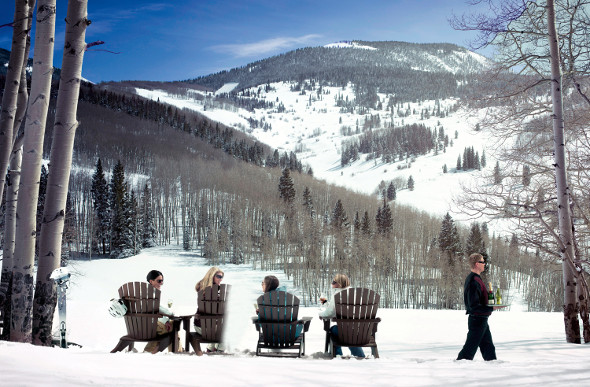 Amping up the fancy at Colorado's Beaver Creek.

There is fancy and then there’s Beaver Creek in Colorado. Walkways at this lush resort are heated to keep skiers and boarders warm. At 3pm, complimentary fresh-baked cookies are handed out by the resort’s resident chefs to weary skiers as they ski off the slopes in need of sustenance at the end of the day.

There are even free postcards to fill out and address and the resort’s hosts will mail them for you, postage included. The mountain has private clubs and chalets and the gated community of Bachelor Gulch is home to the uber-swanky Ritz-Carlton. 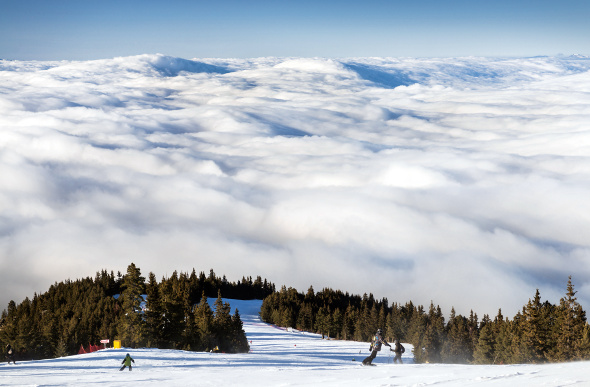 While everyone else is waiting in line for the gondola in the established resorts of France, Switzerland and Austria, you could be hitting the piste in Bulgaria. Where? Eastern Europe is where it is at for the intrepid skier looking to add to their list of remote ski destinations.

A mere 70 kilometres from Sofia, the Bulgarian capital, Borovets is one of the country’s most popular ski resorts and has 58 kilometres of piste runs. It is considered by Bulgarian standards to be a luxury ski-in ski-out resort and is set among woodlands.

There’s night skiing, though most skiers and boarders hit the bars for the famous apres night scene. If you do head out, make sure you try the national, and potent, drink Rakia.

Love the idea of going somewhere your friends haven’t ventured? Then try... 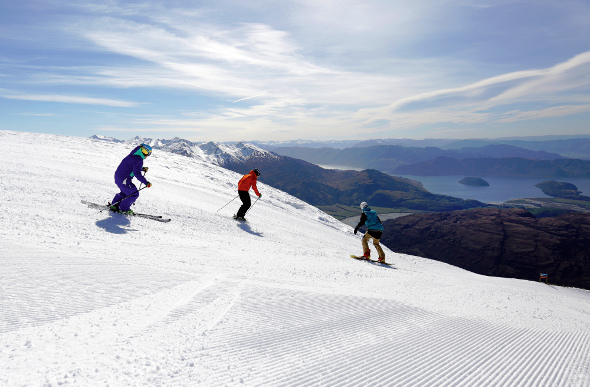 The Treble Cone vistas are unrivalled.

Stand atop Treble Cone ski resort in New Zealand’s South Island and feel like the king or queen of the world looking down upon one of the most stunning views from any mountain ski resort in the world. The surrounding snow-dusted mountain peaks appear to fall into Lake Wanaka’s waters in a plethora of blue, green and brown hues so surreal you would be forgiven for thinking you were on a Peter Jackson movie set.

This vista is visible from every turn of the 550 hectares of skiable terrain, so you can drink it in while skiing or boarding or sit deckside on the mountain cafe with a beverage in hand. 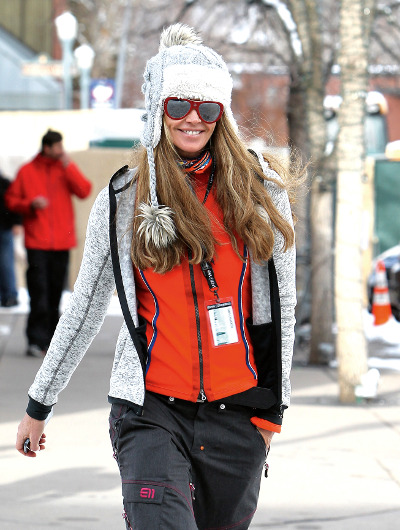 Elle is just another celeb in Aspen.

Who hasn’t been to Aspen? Fortune 500s, Hollywood royalty, rock stars and their entourages line Aspen airport with private jets each winter. Kevin Costner, Goldie Hawn and Kurt Russell, Melanie Griffith and Elle Macpherson all own property in the Rocky Mountains town, and Tiger, Trump and others that need only one name stay at the ski-in ski-out The Little Nell.

Wander the Prada, Louis Vuitton and Gucci-lined shopping precinct and expect to rub snow shoulders with Chad Smith from the Red Hot Chili Peppers, Jennifer Aniston or a Kardashian or two. Try Cloud Nine Alpine Bistro (Will Ferrell has been snapped dancing here) on the Aspen Highlands, a late night at the Caribou Club, J-Bar at Hotel Jerome and Cache Cache for celebrity sightings off the slopes.

If you love the idea of sharing the slopes with your favourite celebs, try…

Be prepared: What To Pack For A Ski Holiday 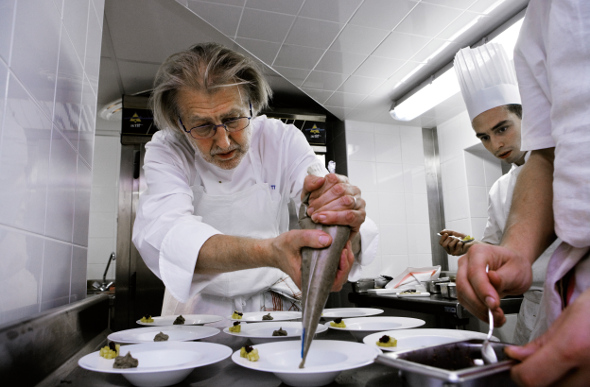 Come winter and the swanky mountain town of Courchevel is filled with doyennes of French-style clinking crystal glasses filled with Champagne between perfect ski runs. You know you’re in the right town when Louis Vuitton has a hotel there (le Cheval Blanc).

So prepare to hand over your credit card to dine on multiple Michelin stars across several Courchevel restaurants, including Les Airelles, Le Chabichou, Le Kintessence, Le 1947 and Baumaniere 1850.

Need more suggestions for wining and dining? Take your taste buds on a tour and try… 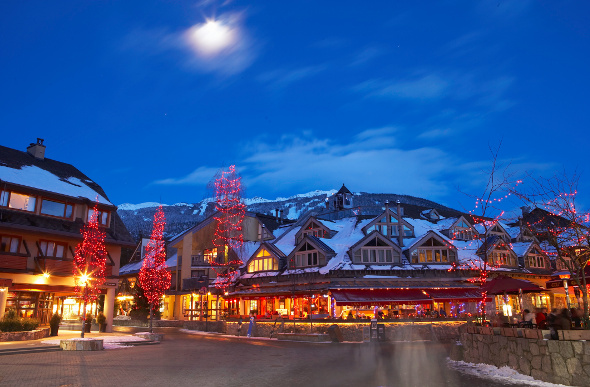 Whistler gets more than 11 metres of snowfall a year.

For 50 years, Whistler has been serving up some of the biggest and best international terrain with a ski-in ski-out purpose-built village a mere two hours' drive from Vancouver International Airport. The largest ski resort in North America, Whistler offers 3,306 hectares across two giant mountain peaks – Whistler and Blackcomb – connected by the Peak 2 Peak Gondola.

It doesn’t stop there, either – Blackcomb boasts a 1,592-metre vertical drop, Whistler has a 1,514-metre vertical drop, and the two together have 10 on-mountain restaurants. The village houses iconic hotel brands, including the Four Seasons, Fairmont, Westin and Hilton. All this with more than 11 metres' snowfall per year. 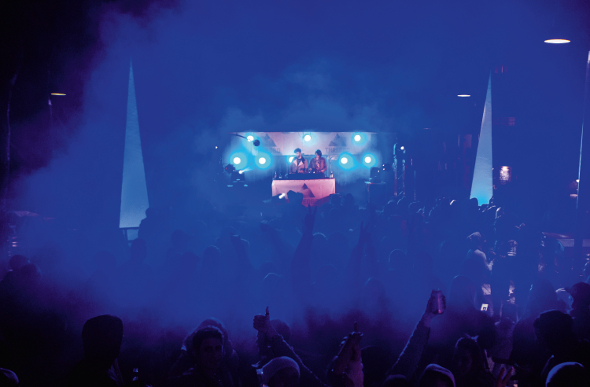 Thredbo sure knows how to throw a good party.

Think apres-ski in Australia and think Thredbo. The alpine village an hour from New South Wales’ Snowy Mountains has long held the apres crown in these parts.

The on-mountain Kareela Hutte has hosted many a long, long, looong legendary lunch that has skiers and boarders lucky to make it back down the ski hill in one piece. More recently, Thredbo has upped the apres ante, importing Europe’s No.1 apres experience, La Folie Douce, for weekend mayhem Down Under, while world class DJs spin groovy tunes.

Love to party as much as you like to ski or snowboard? Try these resorts… 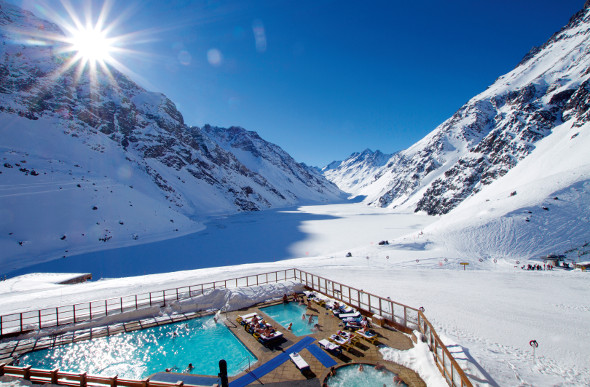 With vistas and snowfall, Portillo has it covered.

The all-inclusive resort of Portillo in Chile sits on the edge of a stunning alpine lake, Laguna del Inca, two hours’ drive from Santiago. The bright yellow ski hotel serves up four meals a day to the week-long guests who arrive every Saturday. 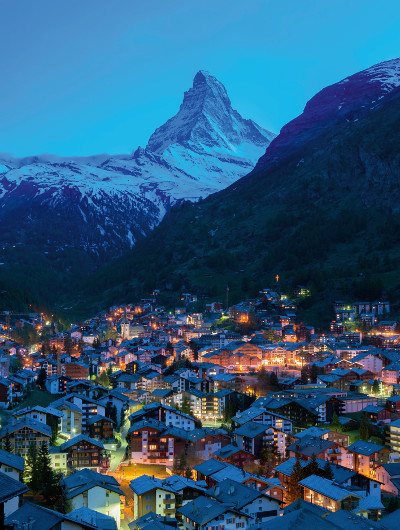 The mighty Matterhorn is known worldwide for its pyramid peak that rises 4,478 metres and sits on the border of Switzerland and Italy. The Matterhorn has claimed the lives of more than 500 climbers. Thankfully, skiers and boarders can just stare at the formidable skyline from within the luxe surroundings of Zermatt ski resort in Switzerland.

Zermatt is as impressive as the Matterhorn under which it lies. Its longest run is a thigh-burning 13 kilometres in length.

The resort also boasts the longest continuous ski season in the Alps (from late November to the end of April), and it is possible to ski from Italy to Switzerland (from the Breuil-Cervinia Valtournenche Zermatt area) for lunch and be back again for dinner.

Rachael Oakes-Ash is addicted to snow. A prolific blogger for her Snowsbest.com website, her snow and ski writing has been published globally by ESPN Freeskiing, Fairfax Digital, Chill Factor, Powderhound and more. She was the Southern Hemisphere editor for onthesnow.com and series producer for Generation Snow TV Series. Have skis, will travel, is her motto.
more articles from this author