The Top 10 Cathedrals In Europe

The Top 10 Cathedrals In Europe

Journeying across Europe is popular with a wide array of travellers. The romantics have picture-perfect settings and the foodies have endless cuisines to choose from. Art lovers have museums and galleries, while religious adherents and historians alike can marvel at some of the world's most breathtaking cathedrals. Here are our Top 10 cathedrals to visit in Europe. 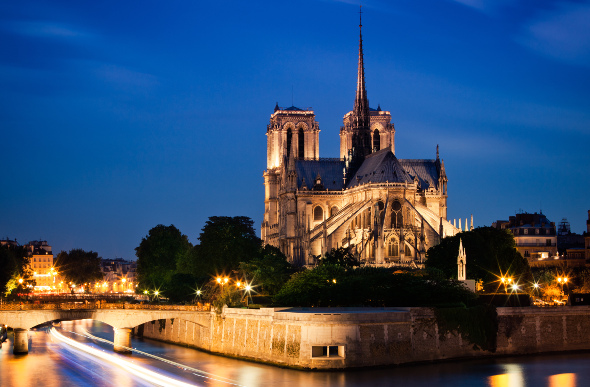 Notre Dame Cathedral, in the heart of Paris

Notre Dame was completed in 1345 and is one of the most famous cathedrals in the world. Architecture appreciators will admire the fact that it was the first building to use flying buttress (curved external supports that mimic the shape of Gothic windows). Visitors can climb the old spiral staircase to glimpse the cathedral’s famous bells – including Emmanuel, which weighs more than 13 tonnes. The cathedral is also widely known for its gargoyles. If caught at certain angles they appear to be looking over the city in a rather sinister fashion!

This striking cathedral seems to endlessly tower into the sky. As the largest Gothic cathedral in northern Europe and boasting the largest façade of any church in the world, Cologne attracts more than 20,000 visitors a day. During World War II it was bombed 14 times -  and still remained standing. In 1996, it was named a UNESCO World Heritage Site for its cultural significance and looms large over the landscape of Germany's fourth-largest city.

One of London’s most iconic buildings and the largest church in England, St Paul’s has come to represent strength as the result of the ‘St Paul’s Survives’ image circulated at the time of The Blitz. Architect Sir Christopher Wren's astonishing work is a world-famous landmark of the city, with the building itself a seat of the Bishop of London.

Eminently recognisable, Saint Basil’s Cathedral was once a church but is these days used as a museum. It was built in the 1500s on the orders of Ivan the Terrible. This unique structure was designed like the flame of a bonfire rising into the sky and is painted in vivid blues, greens, yellows and reds.

The seat of the Archbishop of Vienna and one of Austria’s most acclaimed structures, the roof of St. Stephen’s is comprised of hundreds of coloured mosaic tiles that create a zigzag pattern across the entire side of the building. On the south side they depict a double-headed eagle, which represents the empire ruled from Vienna - a spectacular sight that draws tourists in their droves.

A medieval structure originating from the 1200s, Siena Cathedral is an extremely impressive piece of architecture. Designed in the shape of a Roman cross, each side has its own unique elements of design – and each is as incredible as the next. The western side however, is acknowledged as being the most impressive. It contains inflects of Gothic and Romanesque architecture and three large portal-style entrances.

One of Antoni Gaudí’s most impressive designs, despite only about 25 per cent of it having been completed by the time of his death. The construction of Sagrada Família started towards the end of the 1800s and is still ongoing (completion date is estimated to be 2026). Gaudí’s design, which puts his personal flavour to Gothic architecture, consists of 18 spires. They represent the 12 apostles, the Virgin Mary, the four Evangelists and a central spire representing Jesus Christ.

It’s the outer façade of Santa Maria del Fiore that makes it such an incredible place to visit. The exterior is panelled in marble in various shades of pink and green – a beautiful and unusual colouring for a Gothic building! Despite the cathedral being one of the largest in the world, it does not impose itself on a Florence landscape positively brimming with spectacular buildings.

Located around 80 kilometres south of Paris, Chartres Cathedral is one of the most well-preserved cathedrals in Europe. It even has some of its original stained-glass windows – an impressive feat considering it was built in the 1200s! Gothic in style, it is a testament to fine French architecture and now a UNESCO World Heritage Site. Many travellers venture to see the Sancta Camisa, which is said to be the tunic worn by the Virgin Mary at Jesus Christ's birth.

It seems like Hagia Sophia is visible from almost any point in Istanbul, so powerful is its presence. Originally a Greek Orthodox church, it became a mosque in the 1400s and in 1935 was transformed into a museum. It is considered one of the finest examples of Byzantine architecture and is adorned with beautiful mosaics, huge pillars, marble and urns.