Fun, overdone couldn’t better describe Universal Studios Japan (USJ). Its larger-than-life brand of entertainment abounds across every inch of its 50-hectare land. And this year, the Osaka theme park is abuzz with revitalised energy.

Universal Studios Japan is reborn, or should I say, RE-BOOOOOOOORN (yes, with eight Os) for its 15th anniversary. The over-the-top theme will have you grinning from ear to ear, from the moment you rush through the gates to when you wearily trudge out at the end of the day. RE-BOOOOOOOORN is more than just a theme though, it’s an all-out, mind-boggling celebration. 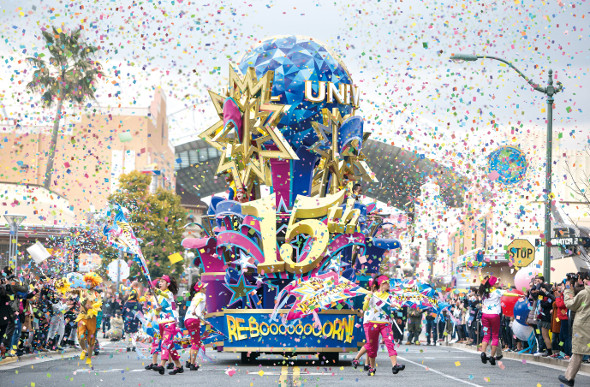 There are parades, then there’s the RE-BOOOOOOOORN parade. This spirited daily street party sees over 100 entertainers in technicolour get-ups, as well as everyone from Hello Kitty to a host of Minions, bring the streets of USJ to life in a spectacle of colour, dance, song, confetti and foam. Here’s a tip if you think you’re in the firing line: BYO poncho!

Oversized isn’t just reserved for the parade though. Wander through the speciality market for a line-up of oversized vending machines (ironically spitting out tiny bottles of soft drink) and food carts. Think massive smoked turkey legs – with the option to spin and win a behemoth serving – along with churro hot dogs!

But let’s not forget why we’re really here, folks. 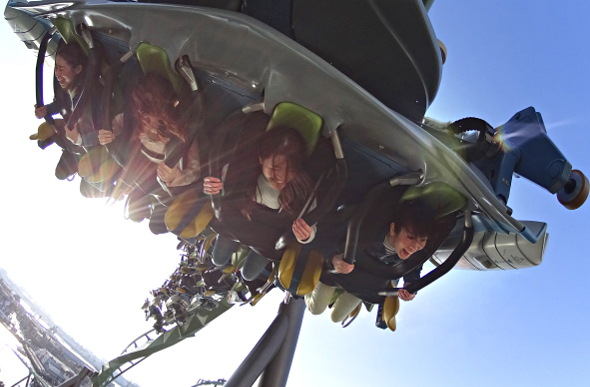 USJ brings the thrills with its Flying Dinosaur ride

USJ gives the Disneylands of the world a run for their money in the ride stakes. The Flying Dinosaur is the park’s newest addition. What the amusement lacks in naming creativity, it makes up for in heart-racing, eye-popping, hair-raising thrills.  ‘Gripped’ by a Pteranodon dinosaur, The Flying Dinosaur combines stomach-churning G-forces with the enchanting world of Jurassic Park.

Oh, and did I mention you’re riding (er, flying) on your stomach as you loop, twist and barrel? The Flying Dinosaur is one for the true adrenalin seekers.

There’s plenty of hype surrounding the Universal Studios, er universe, at the moment. Over in Hollywood, the new Wizarding World of Harry Potter is the talk of the town (due to open in the next couple of weeks), but in Osaka, wizards, squibs and muggles alike have been revelling in the magic of JK Rowling’s imagination since 2014.

The Wizarding World of Harry Potter at USJ opened to a resounding success. So popular is the attraction, you’re allocated time to simply visit and walk around, without taking into account the two rides: Flight of the Hippogriff, and Harry Potter and the Forbidden Journey.

The latter is a 4K3D thrill ride that soars through Hogwarts and the Forbidden Forest. Of course, Harry and co all speak Japanese so the basis of the mission is still a mystery to me! 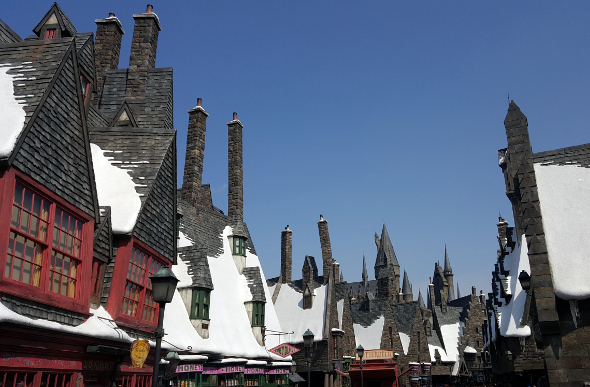 Strolling down Hogsmeade is like being in the books

Then there’s Hogsmeade and its array of storefronts all straight from the pages of the novels. I won’t spoil the magic for you, but it’s everything this Hogwarts hopeful ever imagined.

USJ doesn’t begin and end there. Beyond the excitement of RE-BOOOOOOOORN and the Wizarding World of Harry Potter, the park is bursting with myriad heart-stopping rides and zany entertainment and imaginative food (Minion bun burgers, anyone?).

Come to think of it, fun, overdone is a bit of an understatement.