An insider's guide to the best hotels near the Eiffel Tower, including the best for balcony views, romantic bedrooms and pretty gardens, in locations including the 7th arrondissement, Les Invalides and the Trocadéro.

It's hard to believe that Paris's most iconic monument was originally just a temporary structure put up by Gustave Eiffel for the Exposition Universelle in 1889 on the centenary of the French Revolution. But it's still very much here, still dazzling with its twinkling lights, its vintage double-decker lifts and its 2.5 million metal rivets. Some of the most astounding views are simply the metal structure when you're standing beneath. Here are eight hotels that are just a short walk from the tower in western Paris, and remember that it can be as accessible crossing over the river from Trocadéro and the museums of Chaillot hill, as from the smart residential 7th arrondissement. 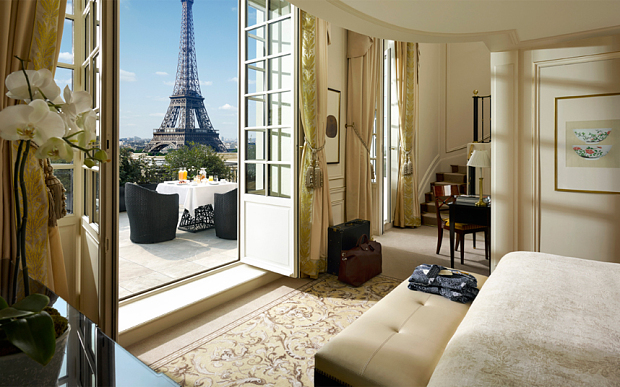 Top-hatted doormen meet cheongsam-clad receptionists at the Shangri-La Paris, but for once a hotel opened by an international group has created a true slice of Parisian history. Originally the private mansion of Roland Bonaparte, eccentric botanist and great-nephew of Napoleon, 101 suites and bedrooms evoke a grand classical lifestyle, some with balconies from which you can almost touch the Eiffel Tower across the river. There's a suitably regal spa and pool, and choice between French, Cantonese and international restaurants. 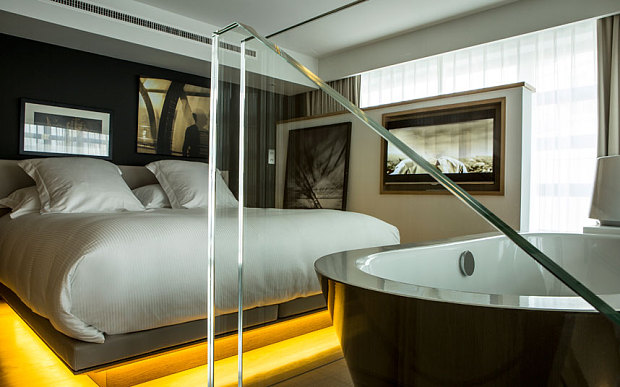 Behind the striking wrap-around façade of a converted 1930s telephone exchange (I’ve heard that the last bay at the end still controls calls to Matignon), this calmly luxurious hotel near Les Invalides is an easy walk to the Eiffel Tower, and a daring new addition to an upmarket part of the 7th arrondissement that is surprisingly short of luxury hotels. Many of the rooms are seductive duplexes, where you climb a glass-sided staircase to the mezzanine bedroom. Designed by Jean-Philippe Nuel, natural wood, clever lighting and original paintings and photos are quietly luxurious, though it's perhaps a little too self-consciously stylish. Four suites have huge terraces, with views of Les Invalides and/or the Eiffel Tower. 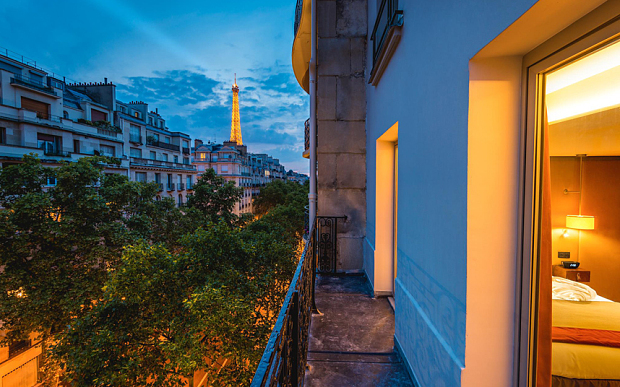 Located at the southern end of the Champ de Mars, it's an easy stroll to the Eiffel Tower. Comfortable modern style with plush furniture and retro-style chairs is combined with an emphasis on easy living. A long lounge stretches through the reception area, while behind there's a library. In the rooms, a few have balconies and views of the Eiffel Tower. 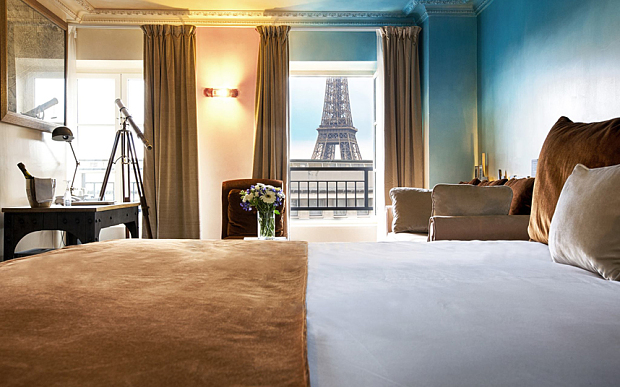 Overlooking Trocoadéro on the hilly street, it's just a five-minute walk down through the Trocadéro gardens and across the Seine to the Eiffel Tower. Bedrooms are an appealing mix of modern touches and revisited Louis XV, with wood floors, rococo bedside tables, little period-style desks. I particularly like the corner rooms (ending in 0), which look over the top of the Eiffel Tower in one direction and across place de Trocadéro the other.

Explore where to eat next time you're in Paris. J'aime Parisian Cuisine

Or where to play off the beaten track. The Hidden Secrets Of Paris 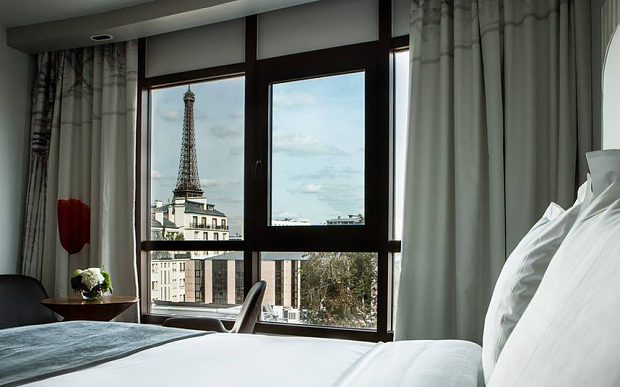 Located in an authentic part of western Paris, with a quintessentially Parisian view of the overhead metro line. It's an easy walk to the Champ de Mars and Eiffel Tower. Decorated in subtle tones of white, grey and brown, two-thirds of the 45 rooms have views over the rooftops to the Eiffel Tower. While the views are what you come here for, it's the way they've opened up the ground floor that works particularly well. 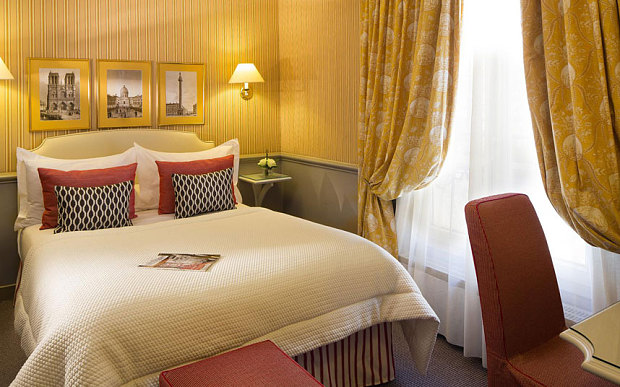 In the smart 7th arrondissement, this is a lovingly-tended budget hotel with the Eiffel Tower virtually at the end of the street and the foodie shops and cafés of pedestrianised rue Cler around the corner. The 25 rooms are prettily decorated in blue or yellow colour schemes with floral curtains and photos of Paris monuments. Some have views of the top of the Eiffel Tower, while a couple have private flowery courtyards. 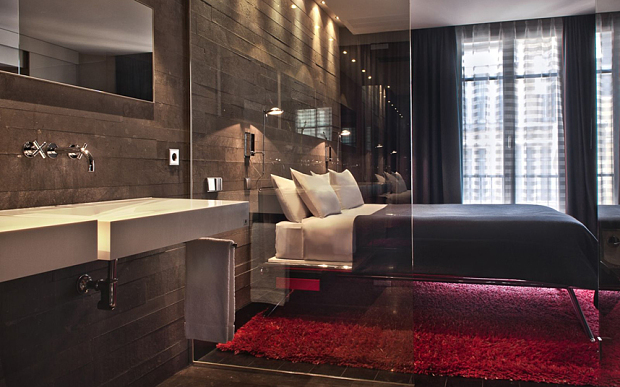 You're just across the river over the double-deck Bir-Hakeim bridge from the Eiffel Tower — with views from some rooms – yet on a quiet residential sidestreet in the smart 16th arrondissement — it's Sezz as in seizieme. Sezz is set to surprise you, as the golden stone 1913 facade gives way to a rigorously modern, grey-stone interior and designer furniture, matched by a lifestyle approach of personalised service. 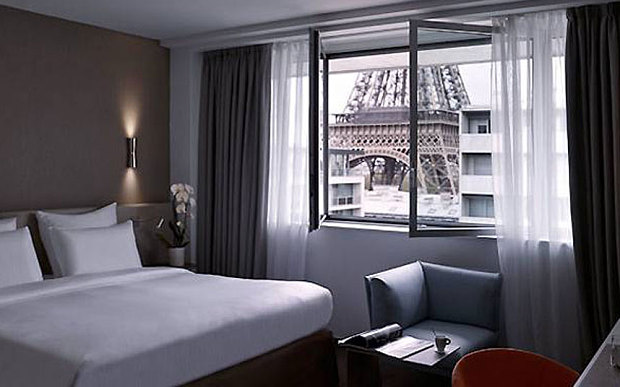 Pullman Paris Tour Eiffel hotel is about as close you can get to the Eiffel Tower and, appropriately enough, this is not classic Paris, but a leap into modernity. The glass-and-steel 1960s building was totally updated in 2014 with stylish new interiors by Christophe Pillet. Features include all-day Franco-American restaurant FR/AME, with its own vegetable garden, and where else can you find chickens in Paris?

This article was written by Natasha Edwards from The Daily Telegraph and was legally licensed through the NewsCred publisher network.