A Melbourne comedian and a Sydney-based lifestyle blogger go to California...

No, it's not the setup for a joke, it's what happened when Aussies Rhys Nicholson (@rhysnicholson) and Tara Whiteman (@taramilktea) visited California recently, visiting Los Angeles and San Francisco. With food, popular attractions, shopping and yes, comedic moments on the itinerary, all the highlights were filmed as part of 2 Aussies in Cali videos.

How would you describe LA to someone who has never visited? 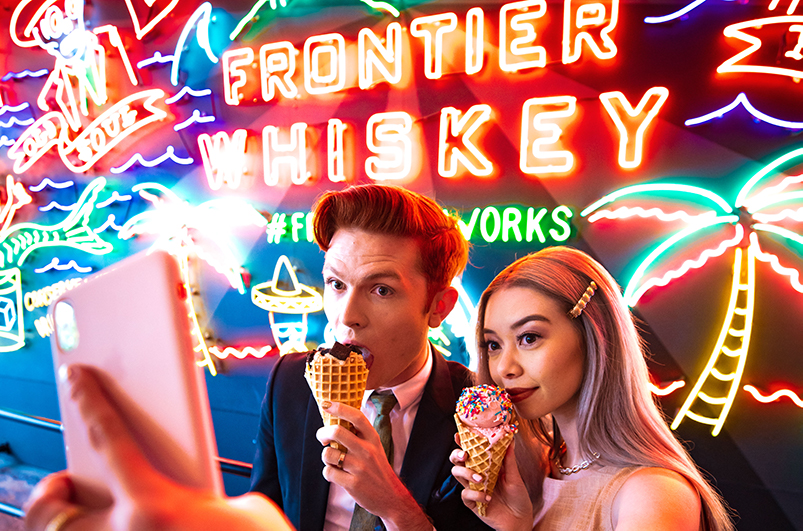 Getting a cone at LA's Grand Central Market.

LA is one of those places that’s incredibly hard to explain because it’s so culturally expansive and I reckon everyone gets something different out of it. My first time, I had no idea what to expect because so many movies have explained it in so many ways. Is it like La La Land? Is it like The Big Lebowksi? Die Hard? Turns out, it’s all of them! To sum it up, LA feels like a warm welcoming hug, followed by your favourite drink. Does that make sense?

What surprised you most about LA when you first visited?

When I first arrived in Los Angeles, I have to admit I was surprised at just how beautiful it is. Seriously. No one tells you that. To be honest I was expecting concrete and some bushes, but it’s so lovely to look at. The sunset (and if you’re doing it right, the sunrise) is definitely something to behold. Well done LA. You’ve smashed it out of the park.

My number-one tip for visiting LA might be obvious to some people, but since it’s my tip I still think it’s worth sharing. I would say don’t over-organise yourself. It’s the type of place where you will always be able to find something to do and explore and if you schedule the life out of your days there, you’ll miss the city opening itself up to you (Does that sound creepy? I didn’t mean it to sound creepy). Also, pack sunscreen because pretty much every day is sunny.

What’s your favourite place to eat in LA?

LA is absolutely my favourite place to eat. I’d highly recommend it anyway, but even more so if you’re travelling with a fussy eater. They will have nothing to complain about if you take them to Grand Central Market in Downtown LA, because there is genuinely everything you can imagine. A bazillion types of delicious cuisines! Whether you just want a teenie little snack or you feel as though you could eat a horse and come back for the jockey, Grand Central Market is where it’s at. 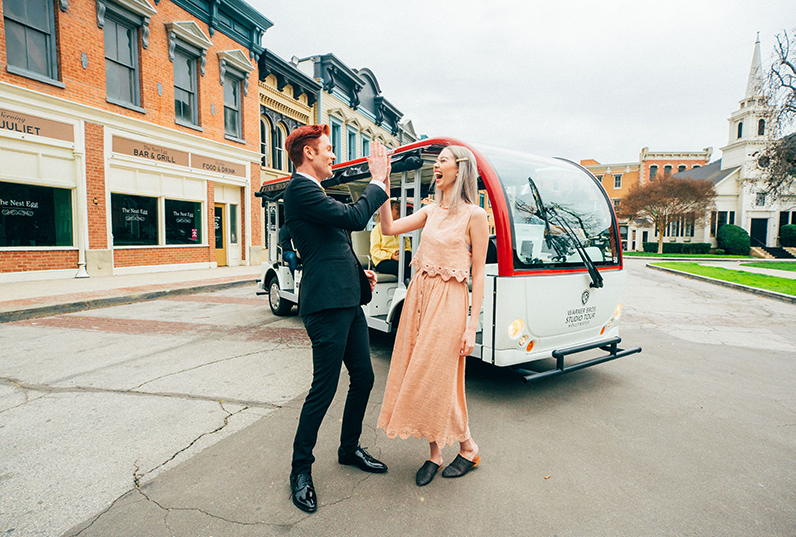 Get stars in your eyes at Warner Bros. Studio Tour Hollywood.

I feel like LA is a country unto itself, like there is about one thousand cities in there, so it’d be impossible to pick just one. For first timers, wandering down the Venice Beach Boardwalk is a pretty fun thing to do. It’s exactly like what you would imagine LA to be and you can easily spend hours there eating, looking at the ocean and the shops along Abbot Kinney Boulevard. I recommend getting something to eat, parking yourself on a bench and get stuck into some deep people watching. If you want good LA people watching, Venice Beach is where it’s at.

What LA cultural experience would you recommend Aussies check out?

I mean, LA IS a cultural experience. You could do all the proper touristy stuff, the Hollywood tours in particular are all good fun! One of my favourite places is the Getty Museum – I go there every time I’m in LA. Whether you like art, design, very slow light rails or booze, the Getty is a must. I recommend getting yourself a spritz, sitting on a balcony and looking over that big ol’ city. She’s so pretty and after a couple of spritzers, she’s even prettier!

Where can you find quality stand-up comedy in LA?

It truly depends on what kind of stand-up you like. The most obvious choice is The Comedy Store on Sunset. It’s a giant in the industry and has started the careers of most of what we know as ‘modern-ish’ American comedy. But if I was you, I’d look up a smaller local show. See what’s in your neighbourhood and catch some small-time acts. It’ll be cheap and probably more fun. Please don’t heckle. 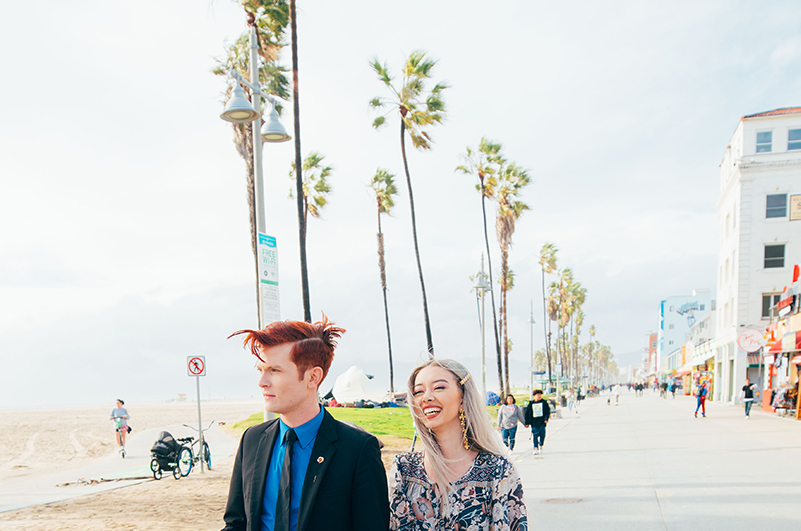 It's always sunny in Venice Beach!

I once saw Tara Milk Tea aka Tara Whiteman...

RELATED: Up for a road trip? Drive Highway One from LA to SF

And then... San Francisco

San Francisco is a foodie city, and you visited some great local hangouts. What was your favourite? 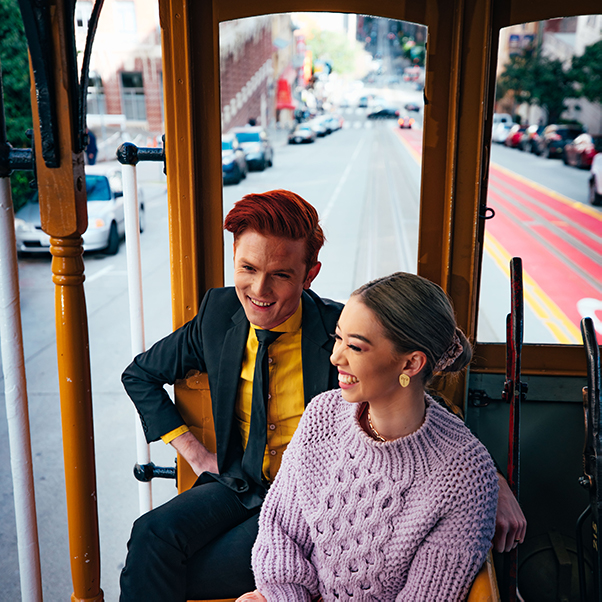 Jump on a cable car at Ghirardelli Square, San Francisco.

I really enjoyed wandering around the Ferry Plaza Farmers markets. But I REALLY enjoyed NOPA. It was exactly what I want out of a restaurant. A new menu every day, incredibly fresh produce, a super passionate and funny chef and the pastry chef was also very good looking. What else could you want? NOPA is my new favourite thing in San Francisco.

If you had to name three must-dos in San Francisco, what would they be?

1. Splurge and go to one of San Francisco’s amazing modern fine dining places. I think eating the food is the best way to get a sense of a city and SF’s food is so exciting at the moment.

2. Go to a dive drag bar and throw some money at the hardest-working people in show business.

3. It’s a cliche but you gotta go look at the [Golden Gate] bridge. I didn’t think I’d care but it was really spectacular.

What will surprise first-time visitors to San Francisco? 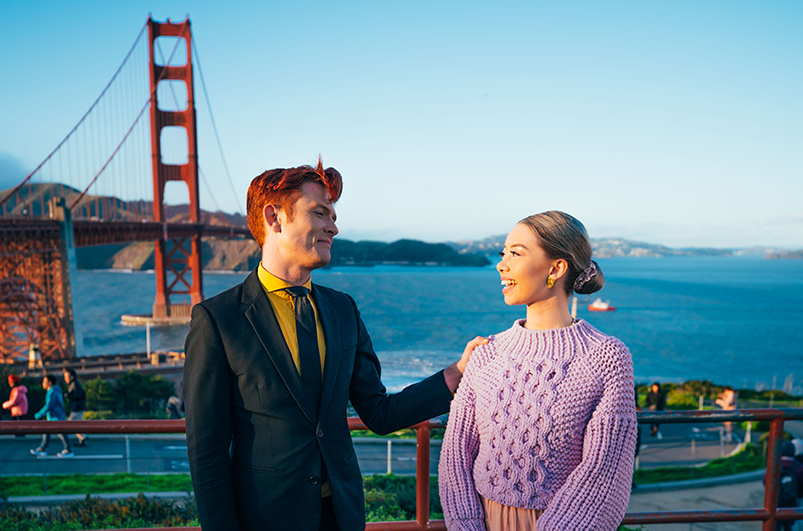 The Golden Gate Bridge is a must-do at sunset.

This might make me sound silly, but for a major city, San Francisco is so relaxed. It feels like almost everyone is happy to be there. I feel like that’s pretty rare in big metropolises.

San Francisco is known for pumping out amazing comedians. Robin Williams started there, for example. Similar to LA, if you want to see comedy it depends on your mood and style preference. If you want to go to a comedy club type of place, then there are plenty. Cobbs Comedy Club seems to be a big one, but I always like to wander into the smaller, dirtier locals' places. Comedy at the back of a bar or small theatre, that’s where the real stuff is happening and it gets right to the heart of what kind of comedy the city is about.

Ready to check out LA and San Francisco? Check out these amaze California deals.