If you’ve been to New York City once or twice before, or simply want to know what it’s like to live like a real New Yorker, you’ll need to lace up your trendiest walking shoes because that’s the best way to not only see the neighbourhood but feel what it’s like.

The main street that cuts through Williamsburg is Bedford Avenue, a roughly 1.5km-long thoroughfare from McCarren Park in the north to the Williamsburg Bridge, with the main stretch between Metropolitan Avenue and the park.However, if you want to experience the area like a local, leave the main thoroughfare, which is heaving with people by about noon on the weekend, and head to the side streets. 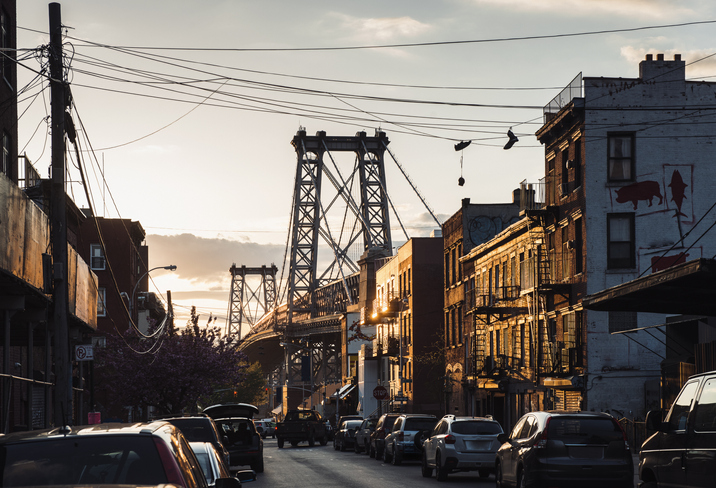 If you’re waking up in ‘Willyburg’, go for a jog around the beautiful McCarren Park, do a few laps of the athletics track, then head north for a lap over the Williamsburg Bridge – a morning runner’s pilgrimage.

But if you’re coming from Manhattan, jump on the JMZ line and get off at the Marcy Avenue stop. Normally you’d get the infamous L train, which services the Williamsburg area, however, it's currently closed for maintenance and is due to reopen around August, 2020.

On your way back after jogging across the bridge or getting off the train, pick up a coffee at Devocion on Grand Street or Blue Bottle Cafe on North 4th St off Berry St. For an Aussie ‘cup of joe’ favoured by expats, head to Sweatshop on Metropolitan Avenue.

Take that coffee to go and line up for breakfast. “Line up!” I hear you screech, yes, around here the locals line up but only for the best brunch spots and usually only if you rock up after 11am. Being the early bird you are you’ll probably will be seated swiftly at the popular Cafe Mogador, a Moroccan restaurant on Wythe Avenue between North 7th and North 6th streets. Ask to sit in the greenhouse if possible and absolutely don’t go past the haloumi eggs.

Once your belly is full you’ll be fuelled to take a wander down and around the streets off Bedford Avenue. Stop in at Catbird, known for its minimalist jewellery, or Rough Trade NYC on North 9th Street for indie records. If it’s thrift and vintage clothing you’re after check out Crossroads Trading on North 7th Street, Buffalo Exchange on North 9th Street or head back towards McCarren Park for the massive Beacon’s Closet on Guernsey Street.

Once you’ve shopped ‘til you’ve almost dropped, head over to North 14th Street and have a drink and a game or two of 10-pin bowling at local favourite dive bar/bowling alley The Gutter.

The list of choices for dinner in Williamsburg is almost endless. For fancy cocktails and oysters don’t go past the New Orleans- themed Maison Premiere on Bedford Avenue. For an Argentine seafood theme with top-notch tequila choices, there’s Rosarito Fish Shack on the corner of Wythe and North 7th streets, or go around the corner to its sister restaurant, Shelter, for pizza, empanadas and a pumping playlist. Another local favourite is Caracas Arepa Bar on Grand Street for New York’s best caipirinhas and delicious Venezuelan home cooking. Don’t fail to order the fried green plantains.

If the evening goes late, and in New York City it always does, make sure you end the night at The Levee, a dive bar with the standard pool table and arcade games but topped off with free cheeseballs and Twizzlers.

Keen to explore NYC for yourself? Chekc out our deals here!