In episode 9 of The 48 Hour Destination, Greer Gardiner is off to the tropical metropolis of Bangkok! Local expert and fellow Flight Centre travel consultant, Aliescha Rattanas is her guide, and together they discover Bangkok's ornate temples, hectic street life, delicious markets and surprising slices of serenity amid the chaos.

In this episode Greer has landed in the bustling Thai capital of Bangkok! Everywhere you look, the streets are filled with friendly people, busy markets and exotic food. To show her around, she’s meeting Aliescha, a fellow Flight Centre Australia consultant, and Bangkok expert. Aliescha has so much planned for the next 48 hours, so get started they head straight into the most famous building in Bangkok, The Grand Palace.

Built in 1782, and for 150 years the home of the Thai King, the Royal Court and the government, this ornate royal complex now houses a museum and is open to visitors, but is still considered the spiritual heart of Thailand.

Visitors should note that there is a strict dress code for visitors to the Grand Palace and the Temple of the Emerald Buddha, Thailand’s most sacred site.

Next up the girls hop onto a traditional long tail boat to head across the most important waterway in Bangkok, the Chao Phraya River. Aliescha shows Greer some more important temples along the banks of the river, before arriving at Wat Arun, where they meet their guide Win, who’s to show the girls around the beautiful temple.

The Wat Arun , or temple of the dawn, is a Buddhist temple best known for its massive prang, a tower on the Chao Phra river bank built in Khmer architectural style. The prang with its height of more than 80 meters is the highest in Thailand. Greer gets a blessing from one of the resident monks.

The girls find a modern street food market close to the river - a stark contrast to the traditional temple experience they have just had. The market showcases local designers including clothes and jewellery and they sample some of the local food.

The girls jump in a local tuk tuk and head back through the city past Siam Square, a shopping highlight in Bangkok. It’s not everyday Greer gets to ride in a Tuk Tuk so she makes the most of it!

Aliescha wants to change the pace a little so takes Greer on a tour of the street art that lines the walls of so many buildings across the city. In 2016 the government invited artists to decorate the city with a modern vibe. They cruise around the city and Aliescha talks Greer through the stories of the different artists.

After a big day of sightseeing, it’s time to get high! Alfresco 64 is the highest Whisky bar in the world overlooking a panoramic view of Bangkok and the Chao Phraya river. With the sun setting on Bangkok city, the two sit back, relax and enjoy the view with a pre-dinner cocktail.

Before dinner, Aliescha introduces Greer to Chef Sam, at Two Michelin Star Breeze Restaurant. Chef Sam shows the girls how he creates his signature dish - Wasabi Prawns. He talks them through how he ‘designs’ the dishes and that it’s a modern take on traditional Asian cuisine. He invites them to take a seat in the restaurant - they get to sample the delicious dishes!!

This morning Greer and Aliescha head out of the city to Ayutthaya Historical Park, just under two hour’s drive north of the city. Founded in 1351 by King U-Thong, Ayutthaya was a thriving province located on an island surrounded by 3 rivers until its destruction by the Burmese Army in 1767. It was the capital for 417 years and the ruins have been made into a World Heritage site.

The pair head on to Wat Mahathat - where a large Prang and buddha still stand untouched. The girls kneel in front of the Buddha head that has been trapped in the tree roots of a Banyan Tree. It is thought that the head fell from its body during the destruction of the site in the 1600s and as the tree has grown it has enveloped the head.

1pm – Lunch like a local at Sai Thong riverfront

Aliescha takes Greer to one of her favourite restaurants in Bangkok for lunch, Sai Thong, which overlooks the river. Serving traditional Thai dishes, the girls sample some local specialties, and get a bit of a shock with some spicy sauces!

For a post lunch sweet treat the girls head down U-Thong Road to sample some freshly made cotton candy floss crepes – Aliescha’s favourite!

Aliescha and Greer meet Vee, their guide who takes them across the river to Bang Krachao, an island in the centre of the city known as Bangkok’s lung. Not only for its dense vegetation, but because it’s shaped like a lung too! Peddling around the gardens, it’s a nice change of pace and to check out something so unique and different from what you might expect to find in Bangkok.

Falling coconuts, papaya groves and miles of elevated sidewalks snaking through the jungle: Welcome to Bang Krachao, a government-protected oasis of green that the mighty Chao Phraya River wraps around.

The girls refresh and change for their evening at ASIATIQUE The Riverfront - Bangkok’s first large-scale riverside project combining shopping, dining, sightseeing, activities and events under one roof. The strong cultural aspect is what sets it apart from other shopping malls - it strikes a balance between tradition and globalization.

They browse through the food markets and look at the local delicacies - something takes Greers eye and she buys a souvenir for a special friend at home.

Aliescha then takes Greer to a new area of the precinct to show her a special performance. The Joe Louis Theatre shows traditional Thai puppetry and is the first and only traditional puppet Theatre in Bangkok. The girls watch the show and get a chance to meet director of the show and see the puppets up close. They delve further into the artform and how they make the ornate looking puppets.

As the sun sets, the girls return to their hotel and head to the rooftop to reflect on their day over a cool drink. The chef visits them at their table and they sample items from a brand new menu. They are happy to test it out as the food is delicious!

6am – Swim and breakfast at Siam@Siam

On their last morning Aliescha suggests her and Greer sneak in a quick swim in the rooftop pool before breakfast poolside.

Aliescha tells Greer she can’t leave Bangkok without visiting the famous floating markets. The only way to see the markets is to hire a boat and get in amongst the action, so the girls hop on board to see what it’s all about. There are vendors selling all manner of things from fruit and vegetables to hot food – if you see something you like, pull up alongside them then eat up on your boat! The girls head to the famous boat noodle, which Aliescha insists you absolutely must try at the market!

As the end of the 48 hours arrives, Greer and Aliescha reflect on their favourite parts of their time in Bangkok. For Greer , the colours, incredible smells and delicious food of the floating market was a highlight. For Aliescha, Asiatique was her favourite part – shopping and food riverside!

BANGKOK DEALS AS SEEN ON TV 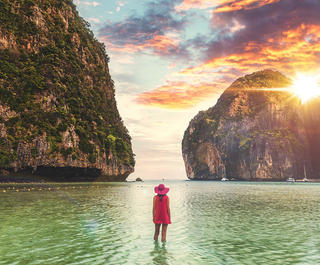 The Best Places To Find Zen In Thailand
15 October 2019
Thailand on your bucket list but not sure where to stay? Here’s our picks for the top places to make the most of Thai culture and also kick back and
Read Time: 4.4 mins
Asia

Same, Same But Different – Bangkok With A Twist
25 January 2019
The sights, smells and cacophonous sounds of Bangkok have long lured travellers intent on soaking up the city’s classic combination of fast-paced
Read Time: 5.1 mins
Inspiration

Top 4 Vegan Cities Around The World
23 January 2019
Around 20 years ago I backpacked around Europe , travelling on an Interrail Pass from Amsterdam up to Germany and Denmark, back through the Czech
Read Time: 11.1 mins