Bangkok has a knack for enthralling every sense. With our Bangkok holiday packages you can expect to be overwhelmed by foreign aromas, colourful sights, dishes jam-packed with flavour and the never-ending buzz of honking cars, motorbikes and tuk tuks.

Some travellers seek a Bangkok holiday package to soak up the culture, others to indulge in the cosmopolitan frills, and others to simply bask in the chaos of this iconic Asian city, home to more than six million Thais. 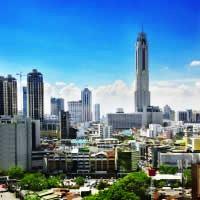 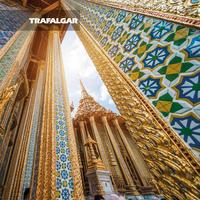 Glimpse past and present on this in-depth encounter with the glittering cityscapes, youthful verve, and centuries-old culture, heritage and...

The bustling capital of Thailand, here the hypermodern and ancient collide along the banks of the Chao Phraya River. Traditional long tail boats and large ferries bob up and down the winding waters; golden peaks of ancient temples jut serenely into the air alongside hectic highways; century-old village houses stand humbly amongst imposing modern skyscrapers flashing with neon lights.

Experience the amazing food and culture of this bustling city

Most of the top sites are in the Old City, in the district of Rattanakosin. Here you'll find the Grand Palace – which includes the most sacred temple in Thailand, Wat Phra Kaew – and the often-visited huge Buddha statue, Wat Pho. The budget traveller's mecca, Khao San Road, is adjacent to Rattanakosin too. A shop-'til-you-drop excursion Bangers style can yield gold, gemstones and tailor-made clothes. King of the markets is the 8,000-stall Chatuchak Weekend Market in Phahonyothin. When you get hungry and inevitably eat at a ubiquitous street stall, here's a free tip: only say yes to satay sauce if you want hot sauce.

Accommodation runs the gamut of budget to call-the-limo-and-the-concierge. High season runs October to April so bargains are up for grabs May to September.

Why book your Bangkok holiday with us?