Home to a proud Scottish heritage, Dunedin is a cosy and historic city located in the thick of New Zealand's rugged terrain. 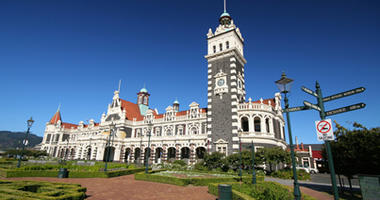 Dunedin, the second-largest city on the South Island, is a famed student town thanks to its reputable university, which is the oldest in the country. The city is built in a natural harbour on a relatively small area of flat land surrounded by steep hillsides. Some of the streets in Dunedin are incredibly steep with many claiming Baldwin Street to be the steepest in the world.

Dunedin cruises dock at Port Chalmers which is located in Otago Harbour.

Dunedin and the nearby Otago Peninsula have a range of sights and attractions beloved by travellers. Wildlife here is particularly exciting as the coastline is home to Yellow-Eyed Penguins, Fur Seals, Sea Lions and a Royal Albatross colony. Further inland you'll find a range of fascinating heritage buildings to visit including Speight's Brewery, the Gasworks Museum and Larnach Castle. Sweet tooths will also want to make it their mission to visit the Cadbury Chocolate Factory while in town.

Dunedin has a thriving culinary industry thanks to its coastal location and rich hinterland. Within the city you will be spoilt for choice with trendy cafes, award winning restaurants and eclectic bars. Take your pick and you won't be disappointed. For something a little simpler, grab some local fish and chips and eat them by the beach.

Make sure you walk along the breezy Otago Peninsula and take in Dunedin's stunning views. If you're lucky you may also spot an Albatross.

Dunedin's university is commonly called varsity and the students are known as scarifies.

Dunedin has one of New Zealand's largest ranges of Merino clothing, so stock up on winter woollies while you're here.