The country that gave us Squid Game, Samsung, K-pop and Parasite also have some eye-popping landmarks that are must-do's for your next visit. Hyper-modern to ancient, South Korea's best landmarks include:

Located in north Seoul and built in 1395, Gyeongbokgung Palace was the largest of the Five Grand Places built by the Joseon dynasty. Just like any other royal family eager to demonstrate the extent of its power, the Joseon monarchs reserved the best palace for themselves. They made Gyeongbokgung their royal household and seat of government until it was destroyed by fire in the Imjin War of the 1590s. Left abandoned for two centuries, all 7,700 rooms of the palace's 500 buildings were restored under King Gojong, but that wasn't the end of its woes. The stunning and ornate Gyeongbokgung Palace you see today is the result of restoration work that was carried out after it was systematically destroyed by Imperial Japan in the early 20th century. The Gyeonghoeru Pavillion and the pond around Hyangwonjeong Pavillion are amongst the best-preserved areas. After taking such a battering through the centuries, this poor palace is at last receiving the love it deserves and will hopefully look resplendent for centuries to come. 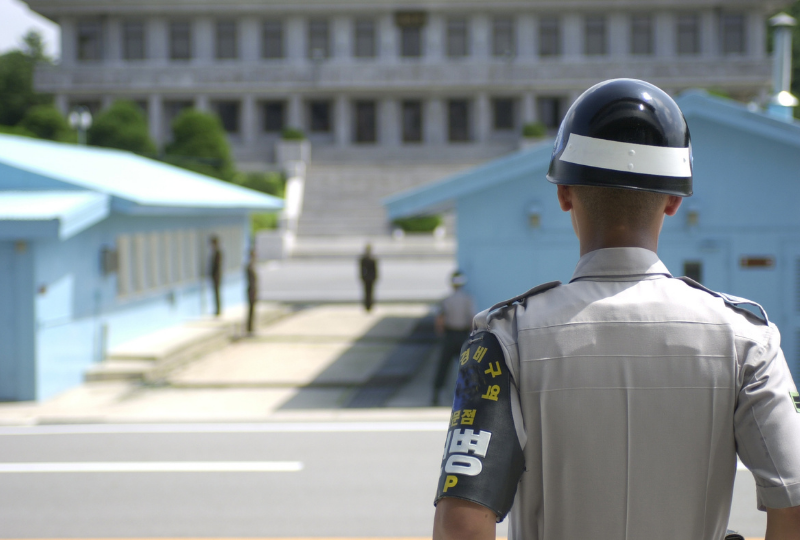 For better or worse – Korea's identity in the west is most often associated with the Korean War that split the Korean peninsula into the Democratic People's Republic of Korea (North) and the Republic of Korea (South). As such, many western visitors have become so fascinated by the de-militarised zone (DMZ) between the two "warring" Koreas that it recently attracted around 1.2 million visitors a year.
RELATED:  An Alternative Guide To Seoul
As a divided nation, only four kilometres separates North Korea and South Korea along the most heavily armed (and surprisingly peaceful *touch wood*) border in the world - but that's not to say you'll be able to wander over and snap selfies with the North Korean border guards. Half-day or full-day visits to the DMZ at Paju are strictly guided tours that confine you to the relative safety of observing scenic views of the uninhabited DMZ and North Korea's "Propaganda Village" from the South's Mount Dora Observatory.  The highlight of the tour is a walk to the Freedom Bridge and then down into the "Third Tunnel of Aggression". The tunnel was originally dug by the North Korean Army in the 1970s who hoped that their explosive underground activity wouldn't spoil the element of surprise so crucial to their subterranean attack on the South. Unsurprisingly, the blasts shook the South's soldiers from their beds and led them to the tunnel, where they chased out the North's diggers and set up concrete barricades under the military demarcation line. Initially, the North denied building the tunnel, then declared later it was part of a coal mine, even though extensive geological studies of the region have never shown any evidence of coal. Now a tourist attraction, the Third Tunnel has a gift shop and a stack of hard hats for your convenience at its Southern entrance. If nothing else, a tour of the DMZ shows us just how totally bizarre a stand-off warzone can be.

A short ride up Seoul's Namsan cable car takes you to N Seoul Tower. At 236-metres, this spectacular structure is almost as tall as the mountain it sits on. Built as a radio and TV broadcasting tower in the late 1960s, a cultural space with interactive art exhibitions, an observatory and restaurants were later added and opened to the public in 1980. At night the tower blinks over the city with dazzling LED displays of movement and colour. Needless to say, the 360-degree view of Seoul are breathtaking by night or day.

While checking out Gyeongbokgung Palace, the largest of the Five Grand Palaces described above, be sure to visit the UNESCO World Heritage Changdeokgung Palace. This palace complex is arguably more beautiful with its amazing architectural detail and Zen-inspired gardens that cleverly blend with the natural topography of the site rather than imposing themselves on it.

RELATED: Everything You Ever Wanted To Know About Seoul (And Then Some!)

Between Seoul's Gyeongbokgung Palace and Changdeokgung Palace is a wonderful slice of traditional Korean cultural heritage, the Bukchon Hanok (traditional house) Village.  You can wander through the narrow alleyways among the carefully crafted hanoks of this architecturally rich folk village for free. Guided tours are also available if you want a more culturally informative experience. 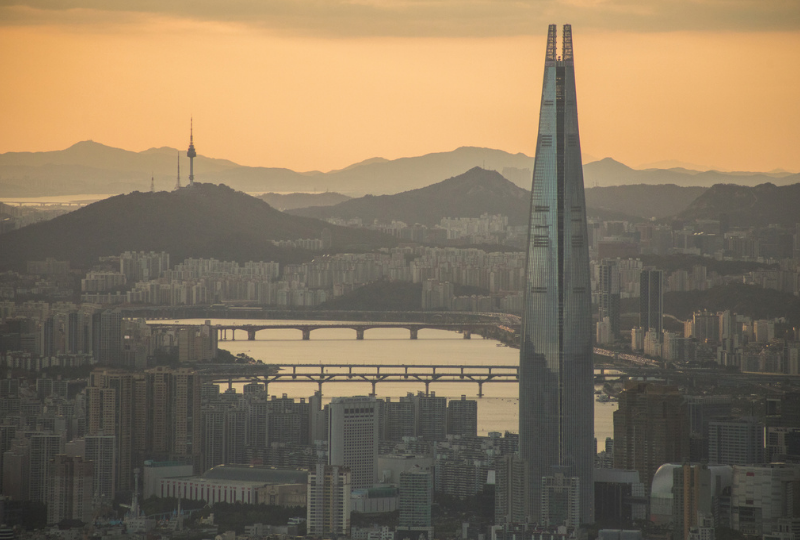 Depending on which way your imagination leans, South Korea's tallest building resembles a giant rocket ready for launch or the great nib of a godly fountain pen. Either way, the Lotte Tower dominates the Seoul skyline in its high-profile Gangnam location looking over Lotte World – South Korea's version of Disneyland. With shopping malls at the bottom, a luxury hotel among its 123 floors and plenty of viewing points at the top, exploring the tower could fill your day. If you're game enough, take the elevator to the 118th floor and visit the world's highest indoor glass-floored observation deck for the most amazing panoramic views of Seoul. Top tip: Get to the observation deck before sunset and watch the colours change over the city-scape as the sun slowly disappears and the city's lights blink on one after the other. Must-do magic.

Of course, South Korea has numerous landmarks to see and visit outside of Seoul. The city of Daegu in the country's south boasts the ARC-River Culture Multimedia Theatre Pavilion – an electrifying example of hyper-modern architecture where the visual form of the structure overrides its function. The curving vessel-like structure sits in a lake and is clad with translucent pillow-shaped panels that reflect dazzling displays of geometry on the water when lit from below. Inside, the ARC houses art galleries, exhibit spaces, a theatre and an observatory.

Even though only around 11% of South Korean's identify as Buddhist today, the extent to which Buddhism shaped Korea is evident in the number of restored temples and monasteries dotted throughout the country. Bulguksa is one of the oldest surviving Buddhist monasteries in Korea and was built during the Silla Kingdom in the 6th Century — a golden age for Buddhist art. The temple complex recently attracted around two million visitors a year who were drawn to its flawlessly restored architecture in a spectacular hillside setting lush with manicured stands of pine, plum, peach, pear, cherry, and cryptomeria trees. The historical significance of Bulguksa and the nearby Seokguram was recognised when they were listed as Unesco World Heritage Sites in 1995.

The U-shaped structure of the Byeongbangchi Skywalk protrudes out over the canyon-like valley of the Donggang River near Jeongseon-eup. If you can cast your nerves aside momentarily, walking out over the glass-floored structure at a dizzying 583 metres above the ground gives you the sensation of flying out over the valley with breathtaking views of dramatic twists in the Donggnong. And if that hasn't left your heart in your mouth, the skywalk also features Asia's longest zip-wire for the wildest ride of your life over the abyss. 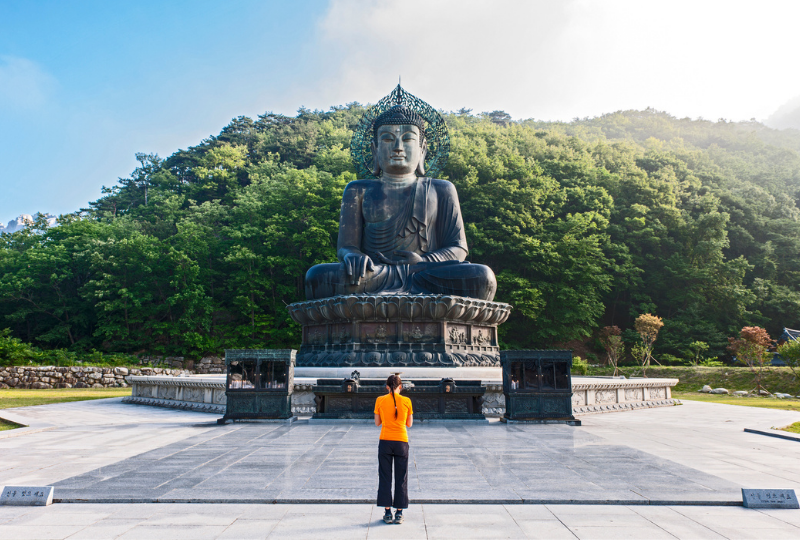 Visit the Seoraksan National Park in South Korea's Baekdudaegan range, and you'll immediately see why seventh-century Zen monks chose this secluded mountainous region to sit and seek the oneness of being. A tranquil land of forests, wildflowers, rock pinnacles and waterfalls – the area was set aside as South Korea's first national park in 1970 and attracts thousands of hikers and selfie-snappers year-round. Although this means much of the area's seclusion may be a thing of the past, particularly over the summer months and during school holidays, a couple of Buddhist temples can still be found within the national park's confines. Baekdamsa temple in the inner Seorak region of the park is still a place of Buddhist practice. So too is the Sinheungsa temple whose 14-metre bronze Buddha statue is a popular photo-op for hikers on their way up Ulsanbawi Rock – a spectacular formation of six granite peaks.
South Korea's unique mix of old and new make it a fascinating country for you to explore and experience.

Thailand Is Open – Here's What You Need To Know
5 November 2021
Fully vaxxed travellers from anywhere in the world can now enter Thailand without quarantine.* The Thailand Pass system resumed new applications for
Read Time: 1.9 mins
Asia 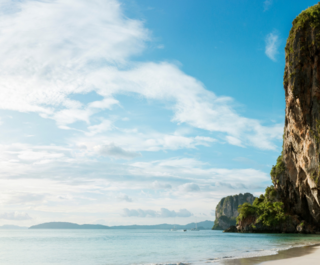 A Guide For Your First Time In Thailand
4 November 2021
Thailand is a travel haven filled with glorious beaches, stunning temples, tranquil mountain areas and mouth-watering cuisine. With so much to do, it
Read Time: 6.5 mins