Everyone loves tapas but sometimes you can’t face another plate of patatas bravas. Forget standing in a crowded bar trying to avoid being stabbed in the eye by a tourist wielding a cocktail stick loaded with chorizo: it’s time for a proper meal, with chairs, and tables.

But restaurants in a place such as Barcelona can empty your wallet quickly; the answer is a menu del dia, the ubiquitous set lunch. The best offer good value and quality and they’ll see you through to the evening and back on the tapas trail.

All menus here include three courses, a drink and bread unless stated

A wander up Passeig de Gracia is pretty much a must-do, whether you’re gawping at Gaudi buildings or heading for the shops. But the Eixample is proper moneyed Barcelona. The shops, the people, and the restaurants are expensive.

That’s why La Polpa, a couple of blocks off the Passeig, is such a find. It’s got linen napkins, smartly dressed staff and a patina of posh, but the menu is still only A$15. That really is astonishingly good value for this part of town.

The food is modern and expertly turned out. A standout was an exceptionally tasty loin of tuna in teriyaki sauce. Even the house wine, a muscat, was a cut above the usual menu offerings.

The Raval, just off the Ramblas, is, despite everyone’s best efforts to talk it up, still rough and ready in parts.

Carrer de l’Hospital, all phone shops and dive bars, is fascinating and when you want a break you can duck into the courtyard of the 15th Century Hospital de la Santa Creu. 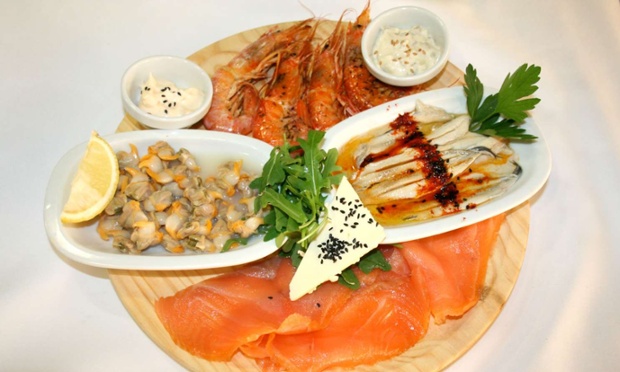 It’s a lovely quiet space and there’s a little open-air restaurant, El Jardi, which puts out great food from its tiny kitchen.

It’s not fancy stuff but delicious. I had a thick leek and potato soup packed with flavour and a hearty lentil and sausage casserole.

Handily, this place ticks another spot off the Gaudi trail: the old hospital is where the architect died after being knocked down by a tram in 1926.

Walk north from l’Hospital and Raval gets more salubrious and positively trendy. There will probably be plenty of time here to watch the world go by because this vegetarian restaurant is very popular and at the busiest times diners have to wait for a table.

The staff are rushed off their feet but still stay friendly and the decor – bare brick walls and tartan upholstery – doesn’t try too hard. 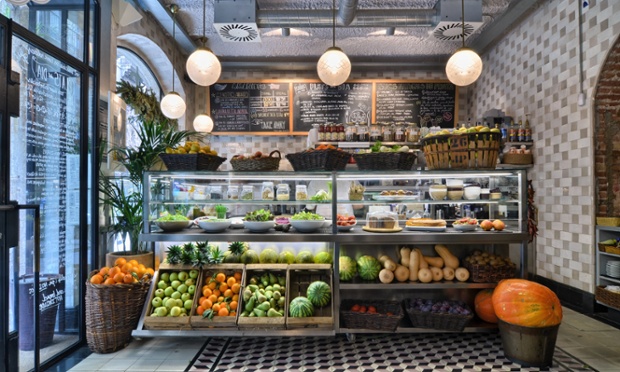 For A$19 you get to choose from a starter of soup or salad, mains (divided into cereals, rice, vegetable or pasta) and a fruit salad to finish. Drinks, bread and fancier deserts are extra.

It’s all wholesome stuff but far from worthy.

The Born district is a great place for hunting down a menu. Its narrow alleys are packed with interesting, independent shops and new places to eat and drink open at a bewilderingly pace.

Beautiful Santa Maria del Mar church is the heart of the barrio and Petra restaurant is tucked away on a lane on its flank. 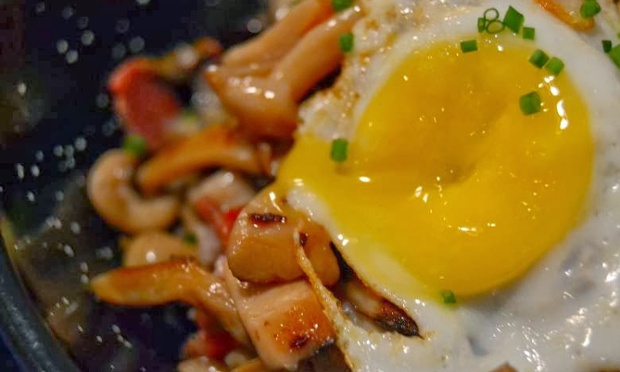 Behind its stained-glass windows lie tiled walls (don’t worry, it’s not as cliched as it sounds: the chandeliers are made of spoons and knives) and a dozen or so tables.

I had pumpkin gnocchi, spicy chicken in a moscatel sauce and crema catalana with baked apple. All good. Cheery chef and co-owner Joan Pluvinet somehow finds time to work the tables.

Ah, pizza, the go-to food for all weary tourists. But Barcelona (and Pisa, Rome, Naples and more) has committed its fair share of crimes against this simple dish.

That probably explains why NAP (the owners are from Naples) is such a success: it takes pizza back to its delicious basics. 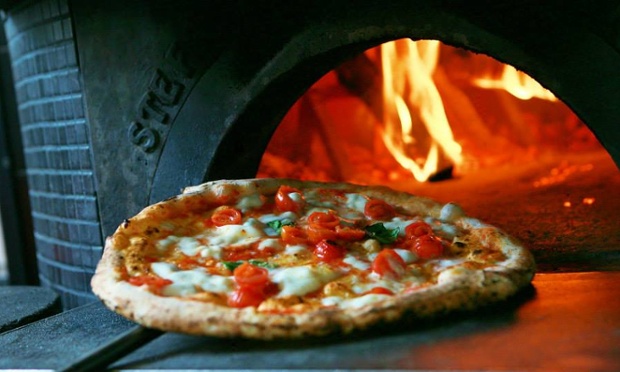 The list of pizzas is refreshingly short, just a dozen; A$11 gets you bruschetta to start, a margherita and a soft drink. Fancier pizzas are a few euros more.

Tiramisu, panna cotta and cheesecake add another A$4.50 or so. No piped music and fishing nets here, just a simple, clean design.

There is also a new, very popular branch in Barceloneta, near the beach.

Poble Sec, a few minutes from Raval and in the shadow of Montjuïc hill, is a bit off most tourists’ itineraries but its quiet streets, pretty squares and friendly locals make it worth the detour. It’s being billed as the “new Born” but thankfully has some way to go yet. 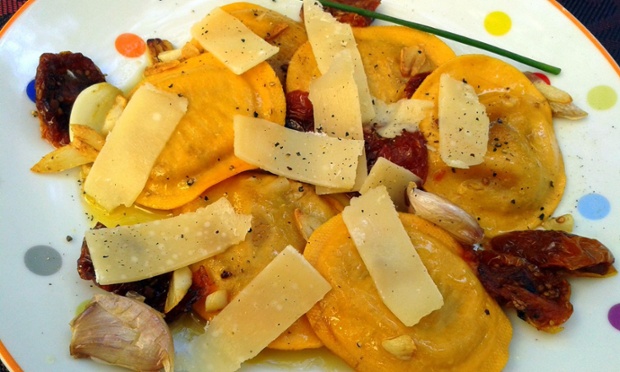 The standout spot for tapas is tiny Quimet i Quimet (Carrer del Poeta Cabanyes, 25, +34 934 423 142) but a friend took me to Luki, in the corner of Plaça del Sortidor. The decor is exuberant, but in a good way.

The aubergine ravioli were fantastic, followed by slices of rolled chicken in a brandy sauce. For once, I skipped desert, except for a spoon or two of my friend’s chocolate tart.

OK, you’re trapped in the old town, tapas to the left, touts to the right. There’s no escape – time to go old school at the “House of Spoons”.

It claims to be the oldest restaurant in Barcelona and the menu doesn’t feel like it has changed in a couple of hundred years. It’s always packed with Spanish families, gossiping abuelas and tourists.

And they all look like they are having a very good time. 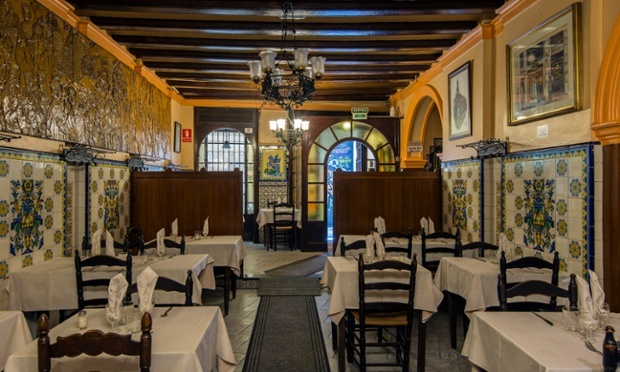 Individual dishes are such good value (goose with apples is lovely, filling and only A$14) that they almost make the AA$25.50 menú look expensive, but three courses give plenty of time to enjoy the atmosphere.

The fish soup is not too heavy, which was a good job because I followed it with pig’s trotter cooked in cava and the inevitable crema catalana.

Tourists stream to the beach along Passeig de Joan de Borbo, the main drag of the old fishermen’s quarter of Barceloneta.

The unfortunate ones get hooked in by one of the many desperately poor restaurants here. 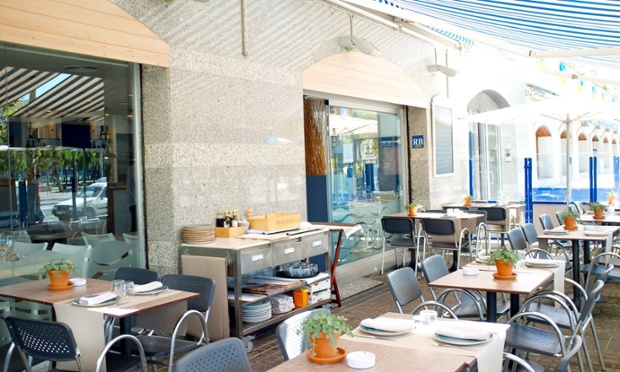 The only good one I knew was Suquet de l’Almirall, but it’s expensive.

Thankfully, a friend introduced me to La Mar Salada a few doors along. Take a table in the sunlit white interior or sit outside and people-watch.

I had cream of artichoke soup, topped with a poached egg, my friend spinach and mushroom cannelloni in almond sauce. Then we had langoustines sautéed with vegetables and served in a lime sauce and confit of duck with oranges and turnips.

There are many bars and restaurants to choose from in Gracia’s charming streets but you’ll struggle to do better than here.

Gràcia was a village until the city gobbled it up in the 19th Century but the barrio retains a sense of community. 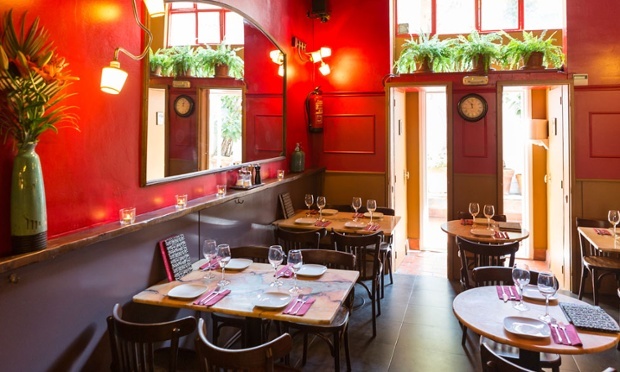 La Singular fits in perfectly: it only has 10 tables and is a cosy locals’ favourite. It’s been going for years but still feels fresh and innovative.

The food is classic Catalan with a bit of a twist. The A$14.50 menu lists, for example, a salad of baby lettuce hearts in anchovy sauce, veal with endives, red peppers and brie, and mousse of mató (a Catalan soft white cheese) with a fruit coulis.

Sarria is another village subsumed by the city but it pretends that never happened.

Little old ladies wander around with little dogs in their handbags and people greet each other on the street. 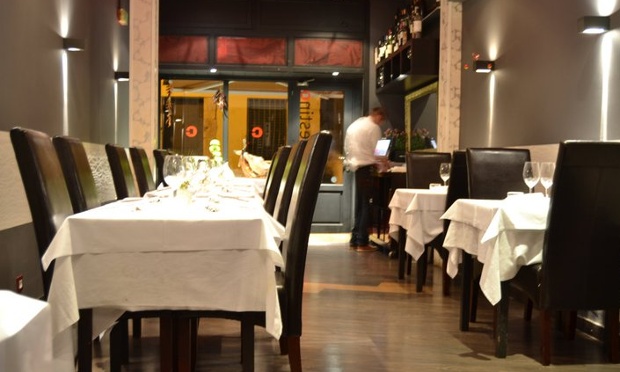 It’s one of the city’s most desirable districts and there are lots of great, but expensive, places to eat.

Never mind, El Clandestino in the heart of the barrio is very good and very sensibly priced.

Unusually, there are half a dozen choices for each course. Nothing too fancy, but very well done – I’ll be trying to cook their beans with clams at home. Butt cheek of cow was delicious – and sounds better in Spanish.

And if you’re still hungry and ready to get back to tapas, Barcelona’s best patatas bravas are served just round the corner at Bar Tomás (Carrer Major de Sarrià, 49).

This article was written by Richard Eilers from The Guardian and was legally licensed through the NewsCred publisher network.