There were many memorable moments for Sunrise correspondent Edwina Bartholomew during her recent exploration of Peru with APT. However when pressed, the bubbly journalist who hails from Whyalla in South Australia nominated flying by sea plane into the Amazon.

"The most memorable aspect of our tour was landing by sea plane in the Amazon. In order to catch up with an APT group who were taking a river cruise on the Delfin II - this was the only way to reach them. We then spent the most magical couple of days kayaking through the jungle and spotting monkeys and birds. It was quite surreal having breakfast on a boat on the world's largest river. We had jacuzzis on our balcony and the most beautiful bedrooms. We certainly did the Amazon in style. Each day you'd wake up in a different location and go on another adventure - fishing for piranha, kayaking with local fisherman, buying bananas boat to boat," said Edwina 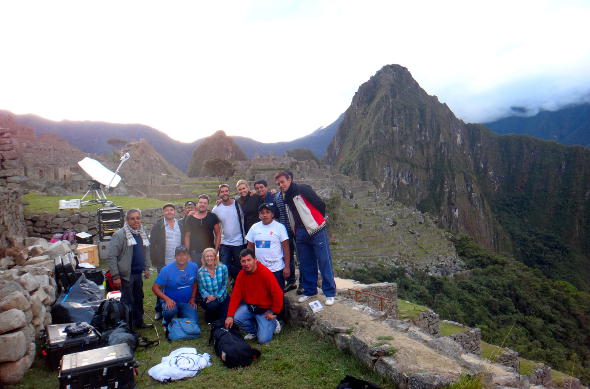 Edwina and the Sunrise Crew at Machu Picchu

"Of course, Machu Picchu was amazing to visit also and a real accomplishment for us to broadcast live too."

Channel Seven's Sunrise program became the first Australian breakfast television show to broadcast live from Machu Picchu, the famed Inca site that was lost to the world until American historian, Hiram Bingham discovered the ruins in the early 20th century. The network worked together with tour operator, APT to showcase the vibrant culture of Peru and the beauty of the Amazon. As well as cruising on the Amazon River and exploring Machu Picchu, over one week, Edwina also visited the beautiful Inca capital of Cusco and watched the locals as they prepared to celebrate the important festival of Inti Raymi. 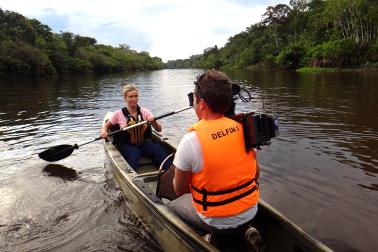 Edwina Rowing in the Amazon

"I had previously travelled through South America as a backpacker - think dodgy hostels and recycled clothes for two months - so the APT experience was entirely different. We had a very knowledgeable guide every step of the way to translate and keep us informed. We stayed in the most amazing hotels. The accommodation in Cusco was in an old Monastery, right in the centre of town and steeped in history. We felt like we were living history," said Edwina.

"Peru is one of the world's most fascinating destinations and we love sharing its secrets with our guests. Taking the Sunrise team to showcase both its iconic landmarks and the warmth and generosity of the Peruvian people is an absolute privilege. Having them film on one of Amazon River cruises is the icing on the cake. We hope that the daily updates from Edwina encourage Australians to contact us to find out more about seeing Peru for themselves," said Debra.

When asked what was the most surprising aspect from the trip, Edwina, who's been an integral member of the Sunrise team since 2011 when she won a competition for a job on the program and now regularly travels around Australia and internationally for the weather segment, emphatically responded, "The food!"

"We enjoyed some of the most incredible meals in Peru. The grilled Piranha on the Amazon was an experience I won't be repeating, same goes for the baked guinea pig. Away from the weird and wonderful however, we had some absolutely delicious meals and the service and hospitality was fantastic," she said.

"On the other hand, what made me laugh was 'The Three Amigos.' Our crew dressed up in ponchos wherever we went. The locals loved it and we enjoyed looking like idiots. We have three ponchos and hats now for sale if anyone is interested?! Herding llamas on Machu Picchu caused us to giggle too. It's a wonder what you have to do sometimes to make live TV." 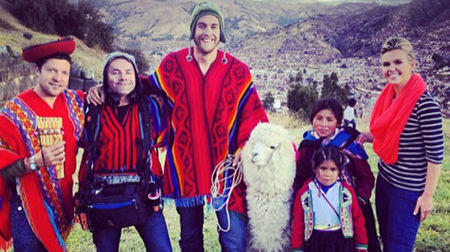 Touring with APT also gave Edwina the chance to chat with other travellers who were also keen to explore the magnificent sights in South America.

"Many of the APT travellers we met on our journey had waited their entire lives to visit South America. It is real bucket list stuff. If you're after adventure, culture and beautiful scenery, don't wait, go now."