There are not many places in the world where you can leave the CBD and within 30 minutes be walking in a rainforest, standing on a deserted surf beach, or sipping Sauvignon Blanc in a world-class winery. That's the beauty of Auckland. Just 24 kilometres west of the city lies a 16,000 hectare sanctuary of native rainforest, beaches, untamed wild coastline and some of the most spectacular natural attractions on the North Island. 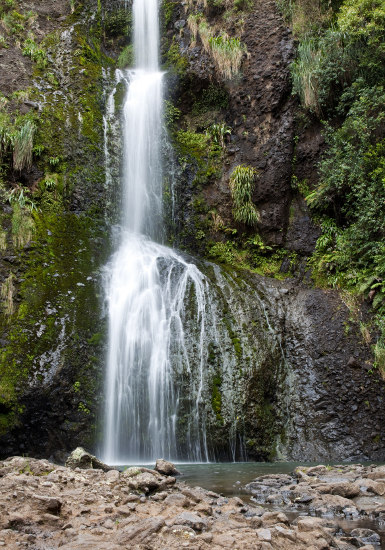 The picturesque Karekare Falls - a few minutes’ walk from the beach

Start your journey at the Arataki Visitor Centre, the gateway to the Waitakere Ranges Regional Park. The centre is full of information, maps and guides – as well as live geckos and wetas, a cinema playing a short film about the area, and a number of viewing platforms in all directions.

The sweeping views back to the city are nothing short of spectacular. The visitor’s centre is close to the town of Titirangi, where the Scenic Drive, the main road into the Waitakeres, begins. 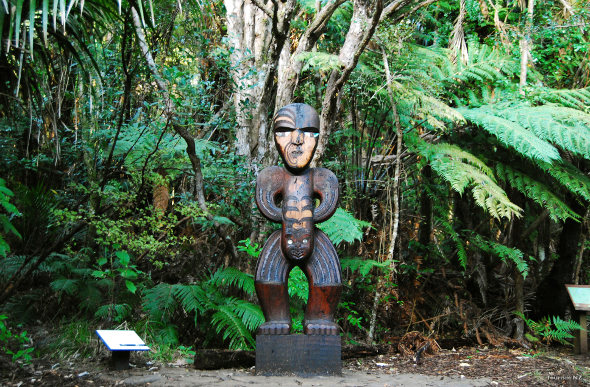 Lace up your boots

The Waitakere region is known as a hiker's paradise, with more than 250 kilometres of walking tracks. The self-guided four-day Hillary Trail, named after explorer Sir Edmund Hillary, connects a network of beaches, tracks and camping grounds.

If the entire trek isn't a viable option, you can always meander along the easy Kitekite Track, which is suitable for the whole family. Taking less than an hour to complete, the walk offers a sample of the region's beauty, passing New Zealand’s famous silver tree ferns and 1,000 year old kauri trees.

The Waitakere Ranges were formed by a series of volcanic eruptions over the past 22 million years. Over time, huge amounts of volcanic sand mixed with ash to form the distinctive black sand colour of the west coast’s beaches. At the base of the park lies one of the most iconic. 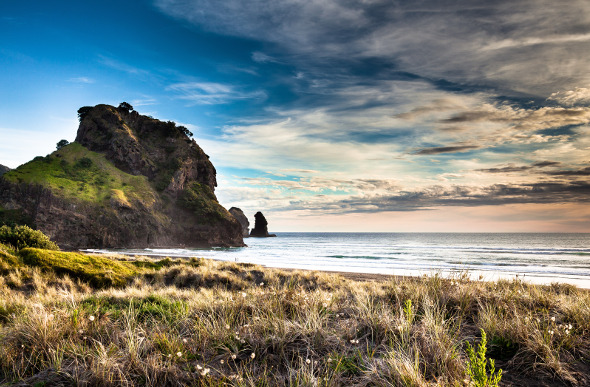 Watch sunset in a blaze of colour over Piha Beach

Slip on your swimmers

Draped in soft volcanic sand, Piha's shimmering black surface is framed by jagged cliffs and is a popular spot for surfing and swimming. See the intriguing Lion Rock, a small island that stands in the middle of the beach, then climb the Piha Beach lookout for breath-taking views of the roaring white waves crashing onto the black sand. On a clear day, it’s worth staying to watch the sun go down in a blaze of pink and orange.

Nearby Karekare is another of west Auckland's magnificent beaches, its isolation adding to its natural beauty. The picturesque Karekare Falls are just a few minutes' walk inland. Although Karekare was made famous by the Oscar-winning movie The Piano, you’ll often find you have the whole place to yourself. 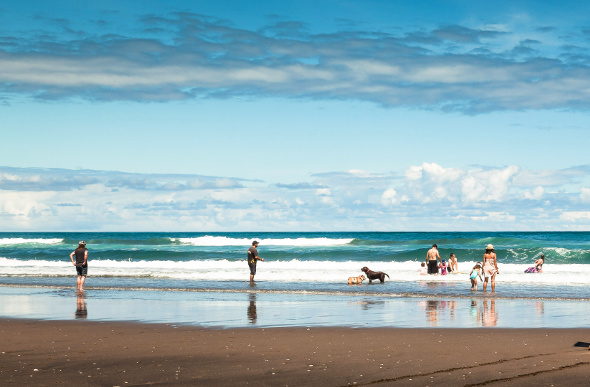 Karekare is one of West Auckland's many magnificent beaches

At Muriwai Beach you'll find a one-of-a-kind North Island attraction: a gannet colony. Approximately 1,200 pairs of adult gannets nest at the Takapu Refuge each summer and can be seen between August and March each year.

This 60-kilometre stretch of beach is also a top spot for fishing, horse riding, swimming and surfing. You can hire gokarts, bikes and kites or simply take a stroll along the boardwalk and get a dose of fresh ocean air.

Drive to the neighbouring black-sand beach of Te Henga (Bethells Beach) where the television series Xena: Warrior Princess and Hercules: The Legendary Journeys were both filmed. 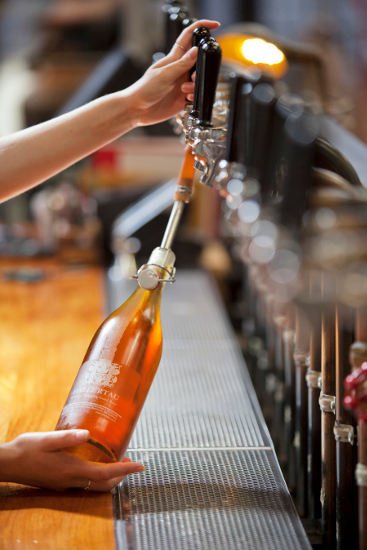 West of Auckland is also where you will find the region’s oldest vineyards. Kumeu is a charming blend of boutique wineries, orchards and rolling green farmlands. Home to some of Auckland’s oldest vineyards, the area features award-winning restaurants, fascinating art galleries and diverse speciality shops.

Try a cellar door tasting at one of the wineries which range in size from small artisan winemakers to some of the best-known names in wine. The region’s winemaking heritage dates back to the 1940s, when families of Croatian origin opened Auckland’s first wineries.

Drop into The Riverhead, New Zealand’s oldest riverside tavern for a meal and drinks overlooking the water, or visit the nearby Hallertau Brewbar and Restaurant and sample their home-made craft beers. Make sure to stop off at The Honey Centre to pick up a jar of artisan honey and see the bees at work.

The region is also gaining a reputation with the ‘slow food’ movement for its organic produce grown in the fertile volcanic soils. West Auckland cafes and restaurants offer excellent local and international cuisine, or if you prefer, take a picnic lunch to one of many peaceful picnic spots.

If time permits drive to nearby Helensville and enjoy a cruise on Kaipara Harbour, the largest in the Southern Hemisphere, and end your journey relaxing in the natural thermal pools at Parakai.

The choice of activities seems endless around Auckland’s west coast, and although you’re less than an hour from the city, you’ll feel a world away.