For the self-confessed 'accidental expert' on the ancient Japanese sport of sumo wrestling, Sydney-born Katrina Watts originally only intended to spend two years in Japan to perfect her language skills. Becoming a pivotal figure within sport was never on her radar when she first arrived.

"When I first went to Japan, I was living in Osaka and I went to see the sumo competition. It was just fascinating. I had seen it on the television but I didn't have an enormous interest in it from the broadcast. But it was much more exciting to see it live; to understand the deeper meaning in the sport. It was great to sit up close to the ring and observe the traditions. Sumo was originally a harvest ritual to please the gods," said Katrina. 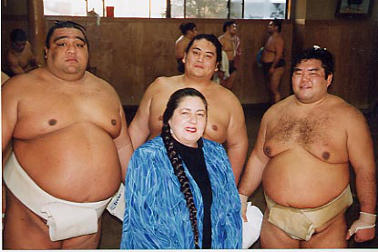 Katrina explained to Flight Centre that being a curious Australian who was essentially observing the art form from outside the Japanese culture; she was able to pose questions of the referees, the stable masters and the wrestlers themselves. She would also take photographs of the younger wrestlers who were keen to have their images taken.

"All these people remembered me because I have a metre-long plait. I started watching the training and because it's polite to bring along food I'd take ANZAC biscuits and my cousin Mary's chocolate slice. I became an accidental expert, so when NHK (the Japanese National Broadcaster) started their English language broadcast of the wrestling competition, they asked me to be a guest commentator. I ended up staying in Japan for 25 years," she said.

Sumo wrestling today is big business in Japan. With only around 750 professional wrestlers in the country, even the junior wrestlers have a popular following. The champions are treated as superstars. It's generally accepted that the sport developed during the early Edo period of the 17th century and many traditions are still followed today.

"The wrestlers enter the clay ring from opposite sides and start with a bow. They then rub their hands together as a ritual washing and clap their hands loudly to attract the attention of the gods before spreading their hands wide to show that they have no concealed weapons. The competitors also throw salt to purify the ring. And then the match starts with an explosive power and a huge tussle of strength," said Katrina.

"The rules are very simple; only the sole of the foot can touch the ground. The object is to make the opponent touch down on the ring or get him out of the ring. There are 82 winning techniques but essentially the wrestlers can throw, trip, push or lift their opponent to win. The matches can last from a couple of seconds to a minute. If the match goes to four minutes then the competitors stop for a drink."

There are six sumo tournaments held in Japan each year that last 15 days each; three tournaments are held in Tokyo at Ryogoku and the others are held in Osaka, Nagoya and Fukoka. In any one day there can be up to 200 individual matches. The top division competitors wrestle later in the day and generally have around 21 matches. Each wrestler will have one match a day, with the competitor who has the most wins over the tournament is crowned the overall winner. 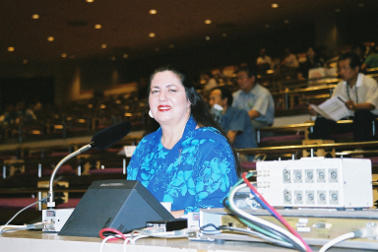 Katrina in the Commentary Box

Based on her experience as a commentator in Japan and her knowledge of the sport, Katrina has travelled the world as a sumo commentator, interpreter and stadium announcer. Interestingly, in 1997, Katrina returned to her home country and commentated with Darrell Eastlake for The Wide World of Sports' coverage of the Australian Grand Sumo Tournament, which was held in Sydney and Melbourne. Katrina remembers that Australian audiences really appreciated the speed and power of the matches, and the unexpected athleticism, speed and flexibility of the sumo wrestlers.

Although Katrina has now been back in Australia for five years, she continues her strong association with sumo wrestling in her capacity as the President of the Australian Sumo Federation and continues to travel extensively with the sport. In July, she will head to Colombia for the World Games, a significant international multi-sport competition similar to the Olympics but for non-Olympic sports.

"Australia has two athletes on the Oceania men's sumo team, but I am going as interpreter and stadium announcer for the International Sumo Federation, a job I have being doing in many countries worldwide since 1999 when Germany became the first country outside Japan to host the amateur Sumo World Championships. Being able to speak several foreign languages has opened many doors for me and my work with the sumo allowed me to travel all over the world.  In October this year I will be doing my announcer/interpreter job at the Combat Games in St Petersburg," she said.

"I guess I am an example of how your passion for something can take you to places you never thought you would go, to see things and meet people all over this amazing and wonderful world."

When asked about her favourite place in Japan, Katrina nominates Kurashiki, which is around 200 kilometres west of Osaka.

"Kurashiki is a lovely old town with a willow tree lined canal, black and white store houses; it's like stepping back into feudal Japan. There's a toy museum, a craft museum and it also has one of the best art galleries I've seen. A Japanese collector sent people all over the world to collect the works – it's called the Ohara Art Museum. I saw paintings there that I studied when I learnt French back at university. It's a really lovely place to visit."

See a Sumo Tournament in Japan
Flight Centre's Group Travel Experts can arrange a Sumo experience in Japan that will coincide with a sumo tournament. Aside from watching the sumo wrestlers in action, the tour may also include sight-seeing in Tokyo, a Taiko drumming lesson and samurai training.

For more information on Sumo tours in Japan, email Ingrid de Haan at ingrid.dehaan@flightcentre.com.au or call her on (03) 9026 3426.