Qantas has debuted its new First Class Lounge inside the new $2 billion Tom Bradley International Terminal at Los Angeles International Airport (LAX) today (Dec 18) and the result is a facility that’s on par with the airline’s flagship lounges in Sydney and Melbourne.

It’s come together with the help of several leading Australians, including star chef and restaurateur Neil Perry and renowned international designer Marc Newson.

The Qantas First Lounge seats over 200 people and features several different zones where customers flying in First Class or those that are Qantas Platinum Frequent Flyers can relax, eat or work before flights to Brisbane, Melbourne and Sydney. 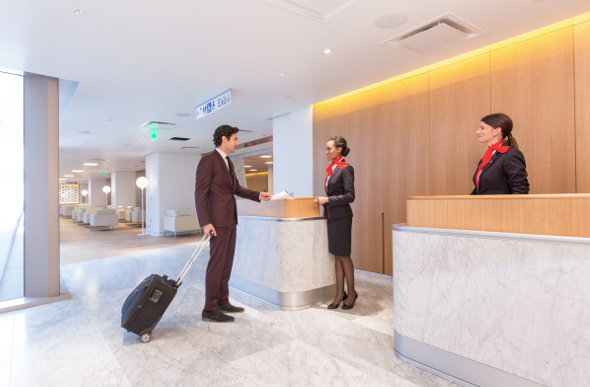 “The new lounge is more than triple the size of the previous space, and the design and service is equal to the world’s best five star hotels and restaurants,” he said.

“Lounges are important to our international customers’ journey, which is why we have drawn on the knowledge of world leading experts like Marc Newson and Qantas Chef Neil Perry to deliver the most luxurious experience before people even step on board.

“This new lounge is symbolic of our continued investment in our customers and commitment to the US market,” Joyce said.

And he’s right. With a 74-seat restaurant featuring food from Perry – the owner and operator of seven restaurants in Sydney, Melbourne and Perth and most famously under the Rockpool brand – the experience in the Qantas First Lounge is nothing short of world class. 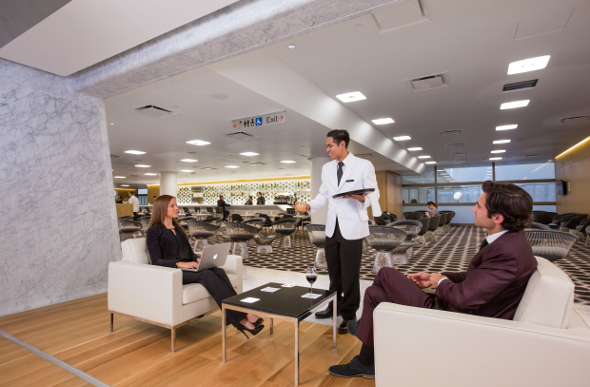 Qantas in fact has been leading the way for years when it comes to lounge food and is one of the very few that offers a full five-star restaurant dining experience before flying.

“We are proud to bring the first Neil Perry restaurant to LA and offer our customers some of their favourite dishes from Neil’s impressive repertoire,” Joyce said.

On the menu, to be updated seasonally, are a number of Perry’s signature dishes that have been given a Californian twist, such as the Black Angus minute steak with chipotle butter and lime, the grilled striped bass with herb salad, and Snake River pork saltimbocca with pancetta, sage and lemon.

There are also sandwiches and burgers, with the standouts being a Korean beef burger with kimchi and gochujang sauce, and a Reuben sandwich with sauerkraut and pickles.

Breakfast is a similarly brilliant affair, with local produce – such as La Brea bread and muesli – featured prominently. There’s also a delicious Croque monsieur, an egg white omelette and a big breakfast of two eggs any style with bacon, pork chipolata and roast tomato. 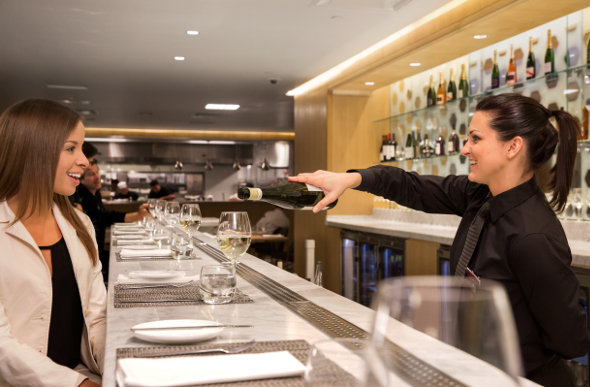 “At airport lounges [in the United States], you don’t see kitchens or chefs, so this really is a restaurant in every sense,” Perry said.

As you’d expect when dining at a Rockpool restaurant, there are several signature cocktails on the menu, including a Mezcal Margarita, Negroni and a Pineapple Mojito, alongside Australian and Californian wines (including a St Hallets Riesling from Eden Valley, South Australia; Wente Vineyards Chardonnay from Monterrey, California; Penfolds Bin 28 Shiraz from Barossa, South Australia; and a Rodney Strong Cabernet Sauvignon from Sonoma, California), several Champagnes, including Laurent Perrier and  and a full barista service.

Food and drinks can be had at the tables in the restaurant or while sitting at the 48-foot-long marble bar that’s stocked with a range of top-shelf spirits and its an ideal place for solo travellers to enjoy a meal before the flight.

Back in June, Qantas debuted its new Business Lounge at LAX, raising the bar significantly from the previous small space that was on offer. The Business Lounge is operated in conjunction with Oneworld members British Airways and Cathay Pacific, while the First Lounge is solely operated by Qantas.

Qantas has partnered with French hotel brand Sofitel at its First Class Lounges in Australia and that partnership has also been extended to Los Angeles, meaning travellers can expect top shelf service across the board.

Alongside the food, cocktails and service, the design from Newson is stylish, modern and in the style of Qantas’ First lounges in Sydney and Melbourne with a few added American touches. 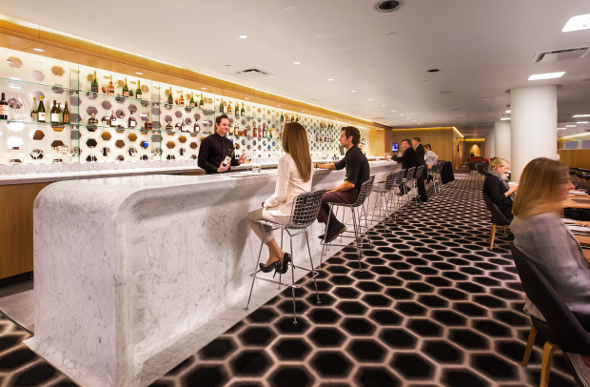 “The new Qantas First Lounge will give Qantas travellers a beautiful, calm oasis to rest, work or dine, prior to their flight,” Newson said.

While the Qantas First Lounge doesn’t have a day spa like it’s Sydney sister, there are seven shower suites that have been decked out with Aurora Spa ASPAR products.

Business travellers can take delight in the facilities on offer, being two meeting rooms that can also be used as work suites.

In the lounge, there’s also lightning-fast WiFi and several large flatscreen TVs loaded up with cable.

Qantas’ decision to significantly invest in its lounge products in Los Angeles is on par with the product available on all flights to and from the United States, with the routes being operated by four-class Airbus A380 super-jumbos and three-class Boeing 747-400s that feature the same high-quality cabins as the A380s. 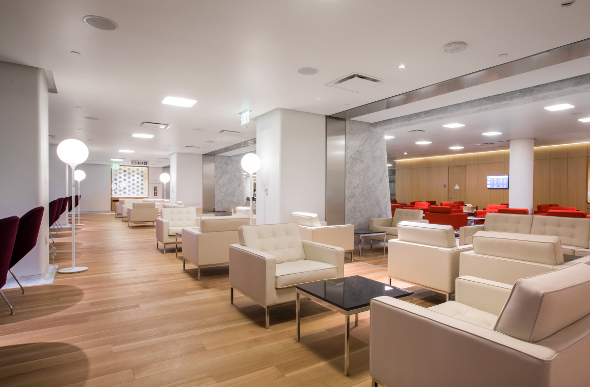 Qantas is the only airline flying the Airbus A380 on flights between Australia and the United States and at the launch of the Lounge, Joyce said it was imperative the airline offered a top quality on-ground product.

The airline’s Airbus A380s feature First, Business, Premium Economy and Economy and with the new First Class Lounge, Qantas has also upped the ante with its services available in the airport through its ‘Qantas First Hosts’.

The opening also comes at an opportune time, with Qantas the same day increasing Melbourne services to ten per week alongside three extra flights from Sydney (on December 18, 19 and 20) to cater for increased holiday period demand.

James Gregory Wilkinson has been writing about travel for the past 19 years and is currently the Travel Editor at Time Out Australia, a role that takes him across the globe on a monthly basis. He’s a travel expert on Sky News Australia and has been published globally in over 20 newspapers, magazines and online.
more articles from this author