Norwegian Cruise Line (NCL) plies the world’s oceans with its 16-strong fleet, from the waters of the Pacific and the Caribbean, to Asia and Alaska, Scandinavia and the Baltics. In October this year, Norwegian Jewel will begin its maiden Australian season, sailing from Sydney on itineraries throughout Australia, New Zealand and the Asia-Pacific region until March 2018. Here’s what else is new with NCL.

NCL celebrated the keel-laying of its 16th ship, Norwegian Bliss, at the MEYER WERFT shipyards in Germany last week. The ship is due for delivery in April 2018, for its inaugural season sailing the icy waters of Alaska over the northern summer, before heading to the balmy eastern Caribbean for winter.

It’s the third in the line’s Breakaway-Plus class of ship, and will accommodate 4,000 guests in a mix of luxurious suites in The Haven by Norwegian, studio staterooms for solo travellers, and connecting staterooms ideal for families. It will also feature two observation lounges, perfect for whale-watching in Alaska or taking in the Caribbean sunsets. 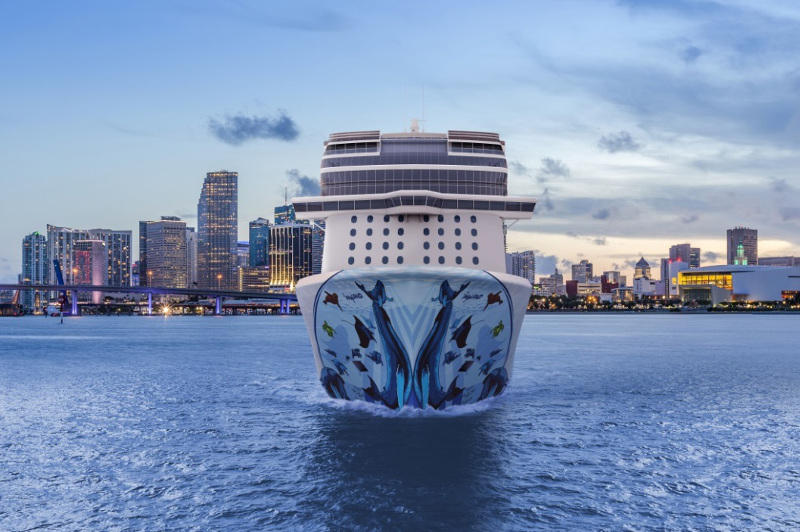 An artist's rendering of the new Norwegian Bliss. Image: NCL

New to the fleet last month is Norwegian Joy, custom-built for the Chinese cruise market. The vessel, which accommodates 3,883 passengers, will welcome its first guests upon arrival in China next month.

The ship received a traditional blessing at a ceremony at the Mazu Temple in Shanghai, to ask for safe and pleasant voyages. A statue of Mazu, the Chinese Goddess of the Sea, has a place of honour on board. The ship will be christened on June 27 by its Godfather, Wang Leehom, the King of Chinese Pop.

Norwegian Jade, which plies the Norwegian fjords, had a three-week revamp in the early part of this year, resulting in two new restaurants and two new bars and lounges, updated decor and refurbished staterooms.  The 24-hour O’Sheehan’s Bar & Grill has been added to Deck 8, while The Pit Stop serves up poolside fun and fare in a 1950s-style American diner atmosphere. New bars include Bliss Ultra Lounge and the Sugarcane Mojito Bar. 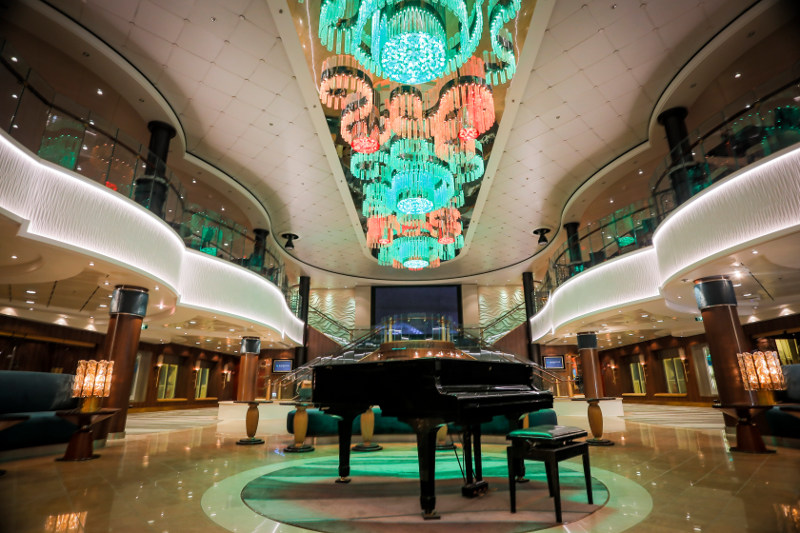 The atrium on board Norwegian Jade is just one of the elements to receive an upgrade. Image: NCL

Meanwhile, Norwegian Pearl, which sails Alaskan waters, was revamped in February, with makeovers to every stateroom and many public areas. As well as new furniture and colour palettes, more than 2,200 pieces of art work were installed in the staterooms, Cagney’s Restaurant and The Haven. Other bars and restaurants have also been revamped.

The new Norwegian Bliss will feature Broadway hit Jersey Boys, as well as an original Cuban-inspired musical created by Tony Award-winning director and choreographer Warren Carlyle. Guests can also enjoy Happy Hour Prohibition – The Musical, which has been delighting audiences in New Orleans and New York for the past two years. 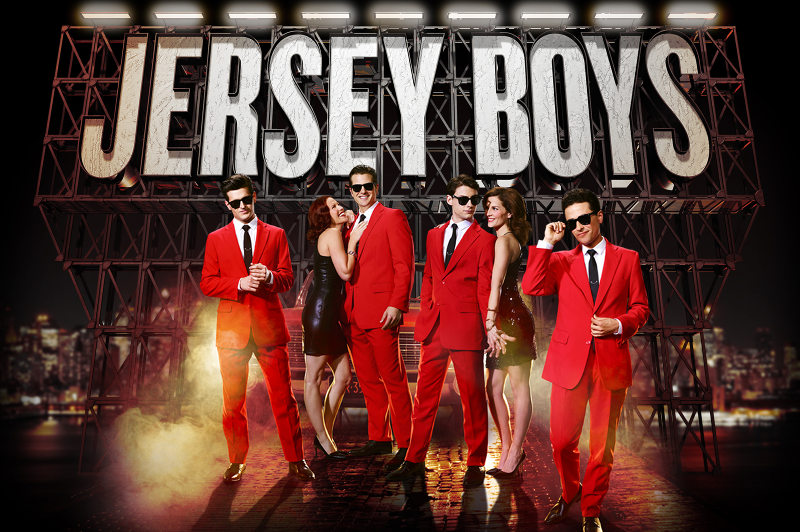 Meanwhile, Neil Goldberg’s Cirque Dreams & Dinner shows have recently been expanded, with all-new menus, on some of the line’s newest ships. Cirque Dreams Epicurean on board Norwegian Epic begins with crowd-warming interactive performers during dinner, followed by a 45-minute performance of jaw-dropping acts in the Spiegel Tent theatre. Cirque Dreams Jungle Fantasy: The Broadway Hit on board Norwegian Breakaway, brings Mother Nature’s creations to life in a unique jungle adventure. And Cirque Dreams and Steam on board Norwegian Getaway features steam punk couture in a spectacle of artistry, variety acts and grandeur.

NCL has also debuted Escape Room experience Escape the Big Top on board Norwegian Getaway, Epic, Breakaway and Escape. In it, an onboard carnival act goes wrong, and it is up to guests to solve the clues and escape the spell before time runs out.

And last month, the cruise line announced it would employ certified lifeguards at all family pools across its fleet by early 2018. 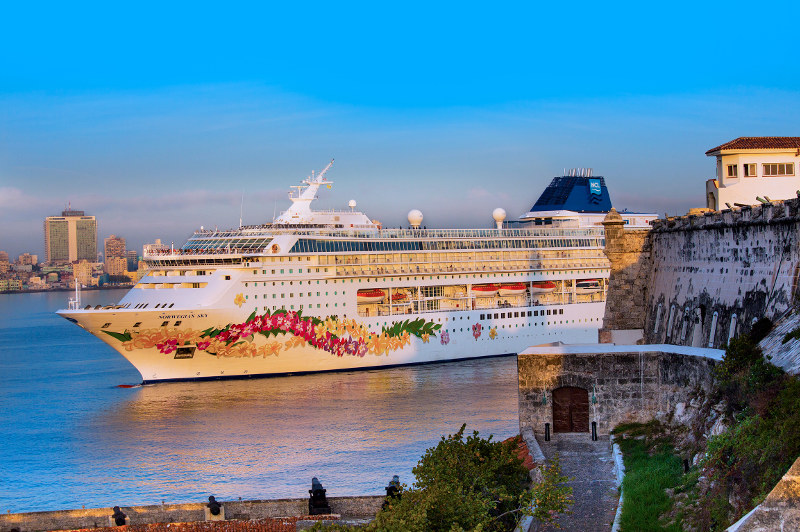 Early this month, NCL made its maiden call to Cuba, when Norwegian Sky sailed into Havana, the first of weekly roundtrip cruises from Miami.  As well as Cuba, Norwegian Sky stops at Great Stirrup Cay, the line’s private island in the Bahamas.

The four next-generation ships in the NCL pipeline will focus on energy-efficiency, aiming to optimise fuel consumption and reduce the impact on the environment. And the line’s newest build, Norwegian Bliss, features hull artwork of humpback whales by Wyland, one of the world’s premier marine life artists, to showcase the importance of ocean conservation and preservation.

Another marine artist, Guy Harvey, will feature prominently on an ocean conservation-themed cruise out of Miami aboard Norwegian Escape in October. NCL has partnered with the Guy Harvey Ocean Foundation and Nova Southeastern University’s Guy Harvey Research Institute to host the Cruising & Conservation sailing. Passengers can meet and enjoy live painting with Harvey, and listen in on expert-led discussions about marine conservation, as well as the making of a shark documentary.