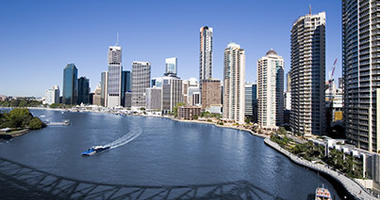 Brisbane is the place to start from if you want an Asian adventure, a look at New Zealand's wild coastline or simply enjoy a selection of South Pacific or Hawaiian beaches.

The Brisbane Cruise Terminal is conveniently located next to Portside Wharf on Hamilton Harbour. The terminal is a state-of-the-art, purpose built facility, and its proximity to Portside Wharf means passengers also have access to world-class dining and retail facilities. The terminal is only 7km’s from Brisbane’s Domestic and International Airports, and can easily be accessed by bus, rail or CityCat from Brisbane’s city centre. Short-term car parking is available, both undercover and curbside, and there is a taxi rank at the terminal. It is also wheelchair accessible.

Some of the larger ships need to dock at the Multi-User Terminal at the Grain Berth, located at Fisherman Islands. This terminal is only equipped for periodical day visits, and has very limited facilities. It is located approximately 25kms from the city and 23kms from the Airport. There is no public transport to the Grain Berth, but there is a taxi rank, and there is free parking available for pick up and drop off.

A new dedicated cruise terminal is currently in construction at Luggage Point, Brisbane. The new location of the port will provide a purpose-built passenger terminal with state of the art facilities. The terminal building will be close to 9300 square metres spread out over two levels. A 200m wharf with two air bridges will allow for easy access on and off the cruise ships. Luggage point is an ideal location for the new cruise terminal as it is closer to Brisbane Airport.