I’ve lost count of how many times I’ve been to Thailand – perhaps 30 times? So what keeps drawing me back? Is it the warm weather? The friendly people? The world’s best street food? Well, I’m partial to all three. But what I think it comes down to is the sheer diversity of the country. From the glitz and glamour of Bangkok, to the misty mountains of northern Thailand, to the dream-like islands and beaches of the south, no two parts of the country are alike. To help you get the most out of your next visit to Thailand, here’s my wrap of the three most-visited regions, including all the key attractions plus a few hidden gems I have found along the way. 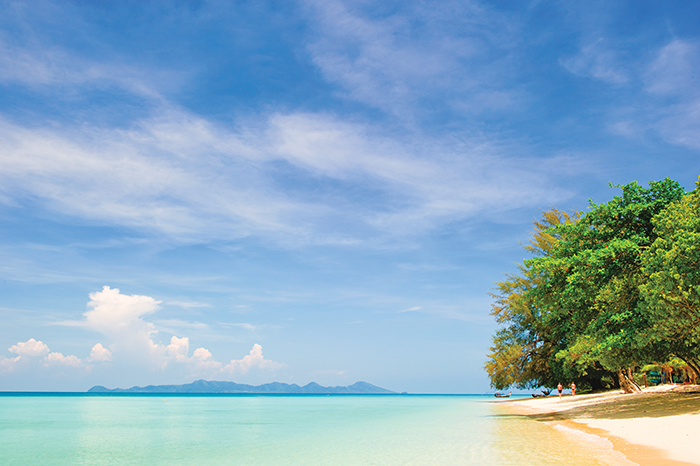 An international airport, palatial resorts and stunning white beaches have made Phuket the most visited of all the Thai islands. But Phuket is just the tip of the iceberg of the mindblowing beauty of southern Thailand. A 2.5-hour drive and a 60-minute boat ride north of Phuket is Koh Phra Thong on the Andaman Coast, dubbed the ‘Africa of Thailand’ for its savannah and rich wildlife: deer, boar, otters, monkeys and leopard cats. Further out to sea, the Surin Islands have some of Thailand’s best dive sites and are a hotspot for endangered whale sharks. The best way to get there and dive around these islands is on one of the many minibus and charter boat package tours that depart from Phuket’s Patong Beach.

East of Phuket you’ll find Krabi province with its dramatic limestone cliffs; not surprisingly this is one of the world’s top rock climbing destinations. Krabi’s coastline is studded with more than 150 islands, including Koh Phi Phi where the Leonardo DiCaprio movie, The Beach, was filmed.

Ao Nang Beach is Krabi’s party town, but I prefer the lazy pace of Krabi town itself and its candy-coloured wooden shopfronts. Two hours south of Krabi is the even lazier town of Trang, gateway to little-visited Trang Islands. My favourite is tiny Koh Kradan, a coconut-fringed paradise cut straight out of the Maldives. But don’t miss out on Koh Mak’s Emerald Cave, a tropical lagoon is studded with more than 150 islands, including Koh Phi Phi where the Leonardo DiCaprio movie, The Beach, was filmed.

Ao Nang Beach is Krabi’s party town, but I prefer the lazy pace of Krabi town itself and its candy-coloured wooden shopfronts. Two hours south of Krabi is the even lazier town of Trang, gateway to little-visited Trang Islands. My favourite is tiny Koh Kradan, a coconut-fringed paradise cut straight out of the Maldives. But don’t miss out on Koh Mak’s Emerald Cave, a tropical lagoon hidden within a limestone amphitheatre that’s almost too beautiful to be true. 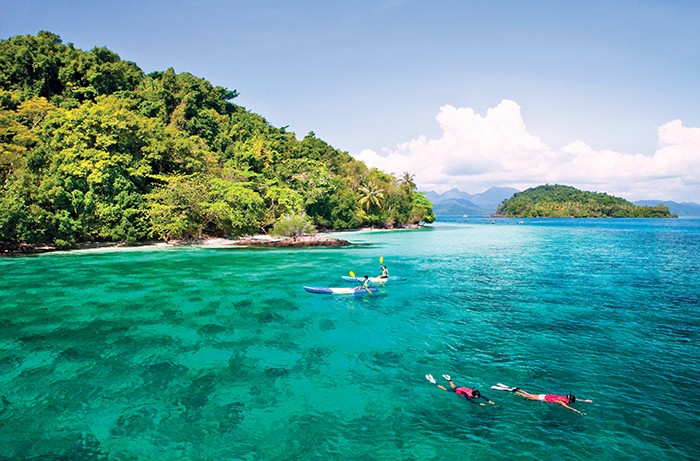 Every year, eight million foreign tourists stream into Pattaya, a string of high-rise hotels, shopping malls and nightclubs two hours' bus ride from Bangkok. But only a fraction of travellers continue east to Rayong, a sleepy coastal town with a surprisingly busy calendar of events showcasing the amazing fresh produce of east Thailand. During the year there's the Rayong Fish Tasting Festival, a Pineapple Festival and the ‘Funky Fruit’ Festival plus buffalo racing events and street food festivals.

From Rayong continue east to Trat, the last major town before the Cambodia border. Trat is a popular gateway for the Koh Chang Marine National Park, a necklace of 54 sun-kissed islands in the Gulf of Thailand.

The largest and most developed island is Koh Chang, a towering rift of mountains, jungle, waterfalls and white-sand beaches – including one that’s actually called White Sand Beach. Most Trat-bound buses will take you directly to the Koh Chang ferry terminal.

After crossing on the ferry, a songtheaw or share taxi will spirit you to White Sand Beach and the many hotels and resorts dotting the island’s west coast. For a Robinson Crusoe experience, catch a songtheaw from Trat to Laem Ngop Pier for a one-hour speedboat ride to Koh Mak, a chilled-out little island with beachfront bungalows and campsites. Koh Kut is another serene isle with accommodation from bungalows to luxury eco resorts. 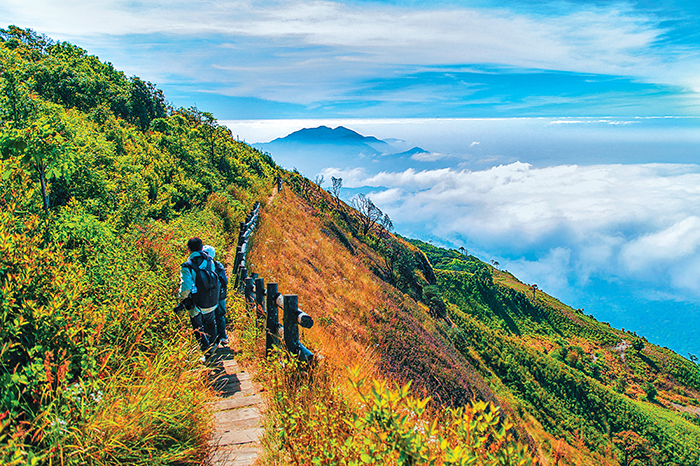 Set 700km north of Bangkok in a lush valley on the banks of the Ping River, Chiang Mai has a village-like feel, especially within the walls of the old city, a compression point of ancient temples, art galleries, hipster cafes and bars. Chiang Mai is also an ideal launching spot for a road trip to the Golden Triangle – a riviera where the borders of Laos, Myanmar and Thailand meet.

You can get there on a motorbike in two or three days with Alan Pratt of Thai Bike Tours or at your own pace by hiring a car and driver, the price of which is similar to renting a car on its own in Thailand.

Your route will take you past Chiang Dao mountain and the cluster of valleys that are home to the colourful hill tribe people of northern Thailand; the terraced tea plantations of Mae Salong; Pu Kaeng Waterfall in Doi Luang National Park; and the incredible White Temple in Chiang Rai, a small town with a lively bar scene only an hour’s drive to the border.

Escape to Thailand with our deals today!