With Finnair offering some very attractive routes to Europe for the business traveller, it’s time to take a fresh look at Helsinki – Finland’s capital of cool and home of the quintessential Scandi-Baltic stopover. 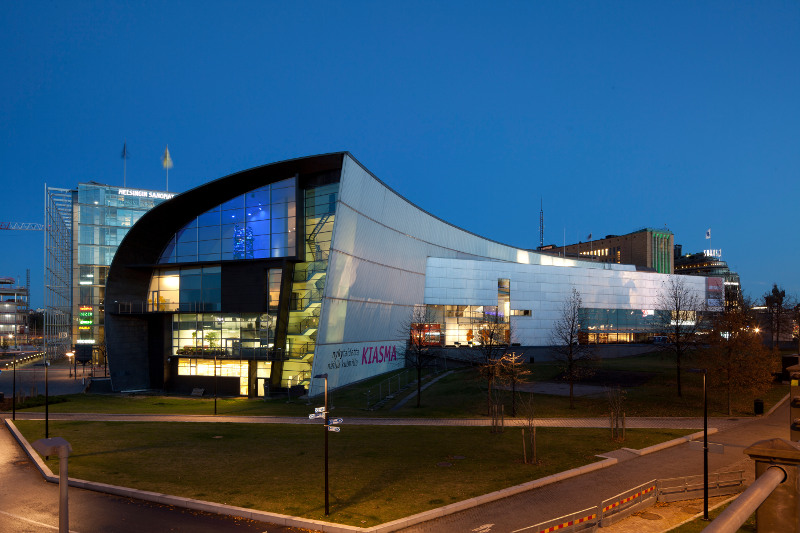 If you’ve never been to Finland, Helsinki is the perfect introduction. Everyone speaks English, impeccable design is everywhere, and the bar and dining scene is very, very good. While most travellers have been to Paris, London and Rome, not nearly as many have been to Helsinki, which is surprisingly liberating. You have no expectations, no experiences you ‘need’ to have, no stories from friends lingering in your head. Helsinki is all yours. 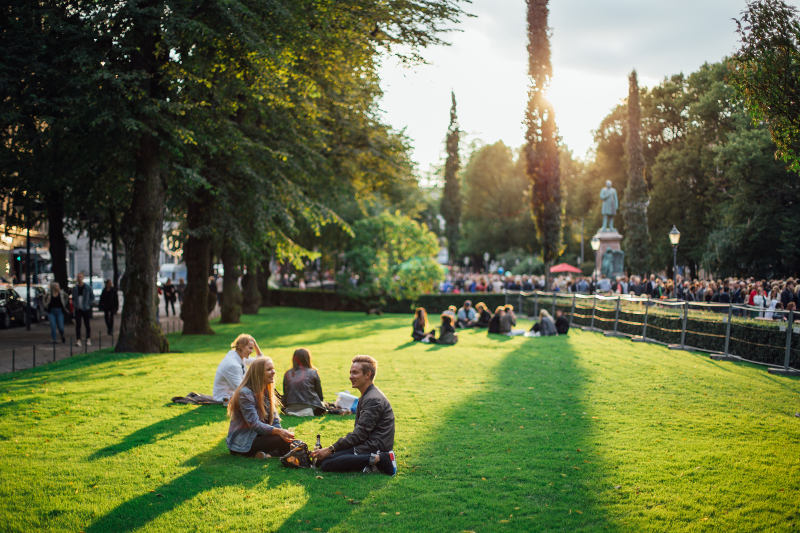 The long days of a Helsinki summer are filled with festivals and fun. Image: Julia Kivela/Visit Finland

Here are some suggestions for your eye-opening Helsinki stopover...

Locals love this hip new restaurant, inspired by cosy Parisian bistros, casual San Francisco joints and small Italian osterias. Known for its welcoming vibe, exceptional flavours, outstanding wine list and happy wait staff who love what they do. If you want to impress friends or clients, this is the place to go. As soon as you know you’re going to Helsinki, call and book your table because Baskeri & Basso is popular.

Small, unassuming but punching well above its weight in terms of cuisine, service and calibre of wines, Kuurna is perfect for an intimate dinner with friends. Located on a quiet side street, this charming restaurant will win you over if you like personal service that is absolutely top class. Many of the ingredients are sourced locally, and organically where possible.

Savoy is iconic Helsinki, located in the middle of downtown. Since 1937, patrons have enjoyed the views across Helsinki rooftops and out over Esplanadi Park. Savoy’s minimal design can be attributed to national hero Alvar Aalto and the firm that went on to become world-famous design group, Artek. If you’re looking for something that oozes atmosphere and is simply like nowhere else, Savoy is the place. 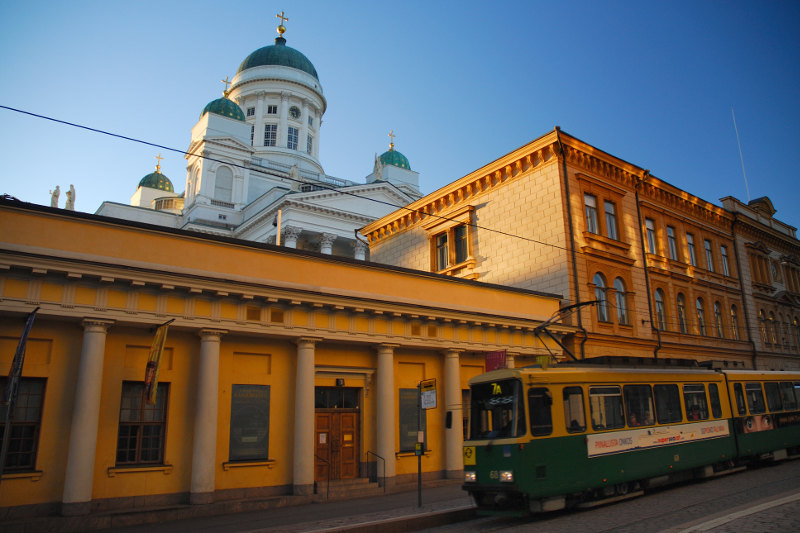 Trams are an easy, convenient and cheap way to get around Helsinki. Image: Visit Finland

A post shared by Clarion Hotel Helsinki (@clarionhelsinki) on 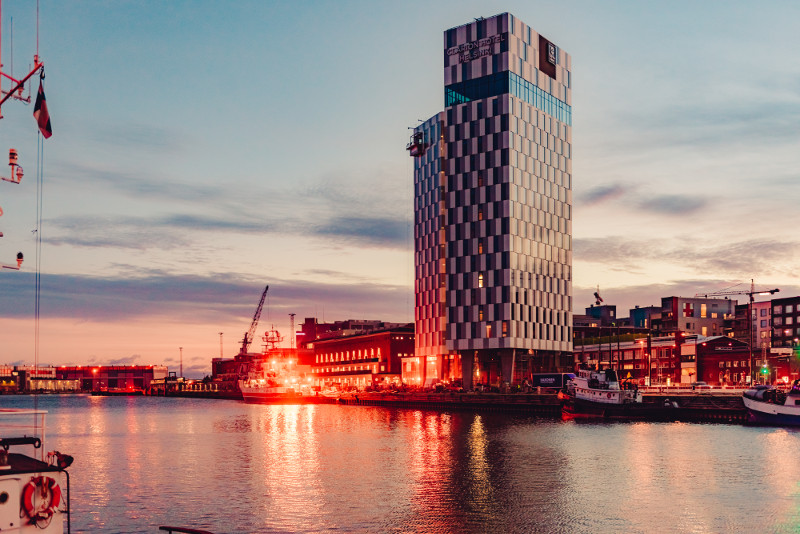 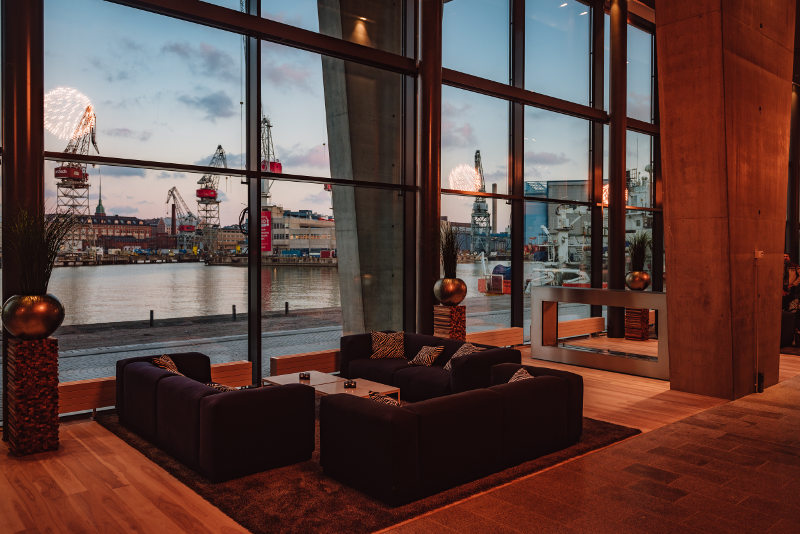 The plush interiors of the Clarion Hotel look out on the Helsinki waterfront at West Harbour. Image: Visit Finland

So if you’re looking for the most spectacular hotel in Helsinki – we’re talking sky bar, heated rooftop swimming pool and transparent glass footbridge that links the two window-clad towers, Clarion Hotel Helsinki could just be what you’re looking for. The hotel opened in 2016 and is known not only as a must-do destination for visitors (Those views! That pool!) but also as a classy place to do business.

Right in the heart of the Design District, Hotel Indigo Helsinki puts you at the centre of a creative neighbourhood, surrounded by an eclectic mix of boutiques, galleries, museums and restaurants that embody traditional and new Scandinavian style. The hotel is located on one of Helsinki’s most historic, well-placed streets: Bulevardi. And if you like waking to the smell of freshly baked bread every morning, you’re in luck – Hotel Indigo Helsinki has its own urban bistro, Restaurant Brod (“bread” in Swedish), serving up a mix of European and local delicacies, with a focus on bread, fresh from the oven.

A post shared by Per V. Rasmussen (@pervrasmussen) on

Historic on the outside, Finnish-modern on the inside, the Radisson Blu Plaza Hotel is the hotel many Helsinki regulars call their Number One. Its location is hard to beat – in the centre of the city, next to the glorious Art Nouveau central railway station designed by Eliel Saarinen – with all transport options nearby, and just a short walk to other major highlights of Helsinki such as the National Theatre, Ateneum Art Museum, Market Square and Old Market Hall, as well as Seurasaari Open-Air Museum. Good to know: the stylish Plaza Lobby which serves wine, beer, coffee and other drinks, plus light snacks and freshly baked pastries is open 24/7. 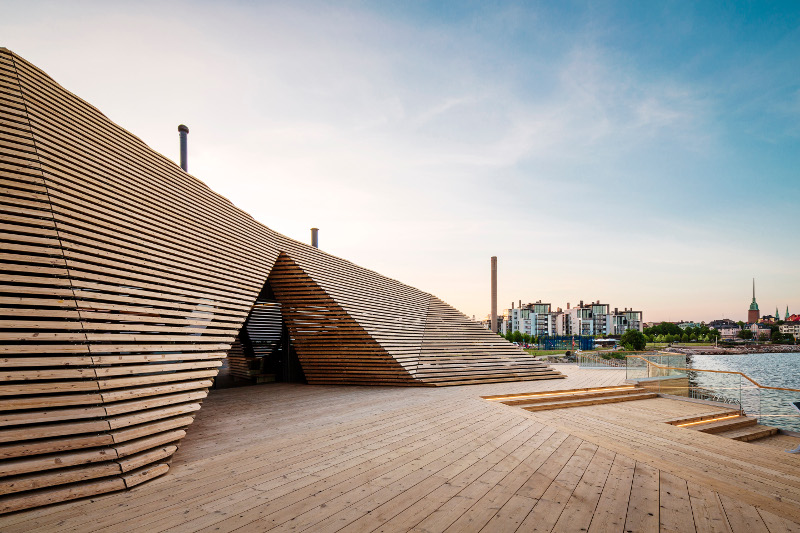 Loyly: the stylish way to take a sauna. Image: Kuvio 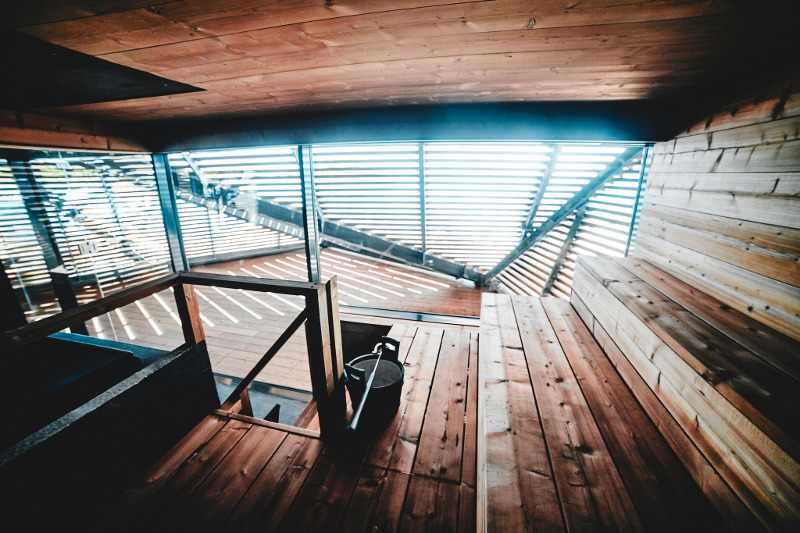 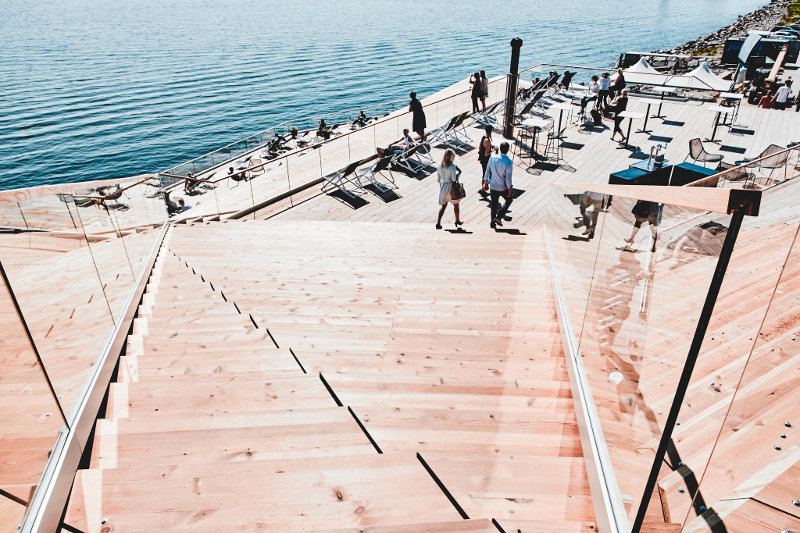 At Loyly there is also a restaurant and plenty of places to soak up the sun. Image: Pekka Keranen

When in Finland: Take a sauna. The sauna (pronounced as if it rhymes with ‘brown’-a) is the most Finnish of pastimes, cultural practice that dates back centuries. Finns take their sauna very seriously, so much so that there are an estimated 3.3 million saunas in Finland – for a population of 5.4 million. Public saunas had declined in popularity but a new focus on creating an urban community has let to new developments, the most impressive of which is Loyly. This super stylish venue embodies modern Finnish design and was built according to sustainable building principles. It occupies a stretch of Helsinki waterfront, has a fantastic restaurant with terrace, and offers visitors to Finland a public sauna experience all year round. 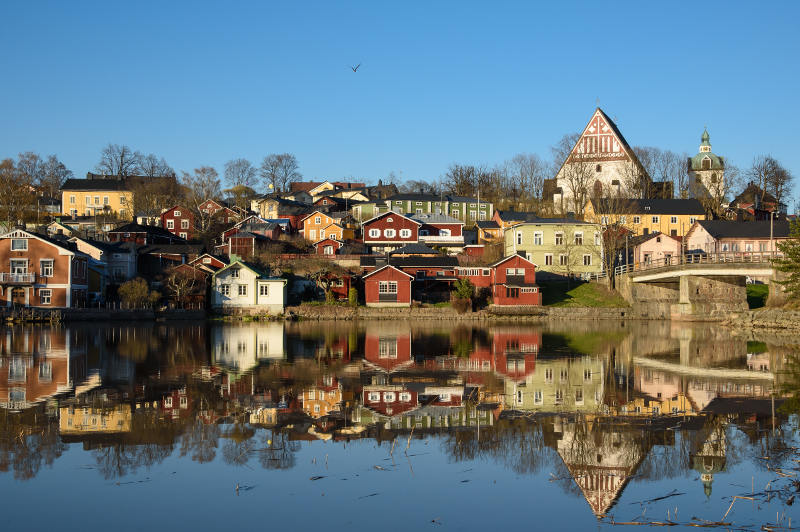 Take a day trip to the beautiful town of Porvoo, less than an hour's drive north of Helsinki. Image: Getty

Idyllic Old Porvoo is one of the six medieval towns in Finland and bewitches visitors with its charming streets and lovely red shore houses. Founded nearly 800 years ago, it is the second oldest city in Finland and home to about 700 permanent residents. In summer, m/s J.L. Runeberg and Royal Line’s m/s RoyalCat cruise between Porvoo and Helsinki almost daily. The ships journey through the beautiful archipelago, departing Helsinki in the morning and returning in the afternoon. 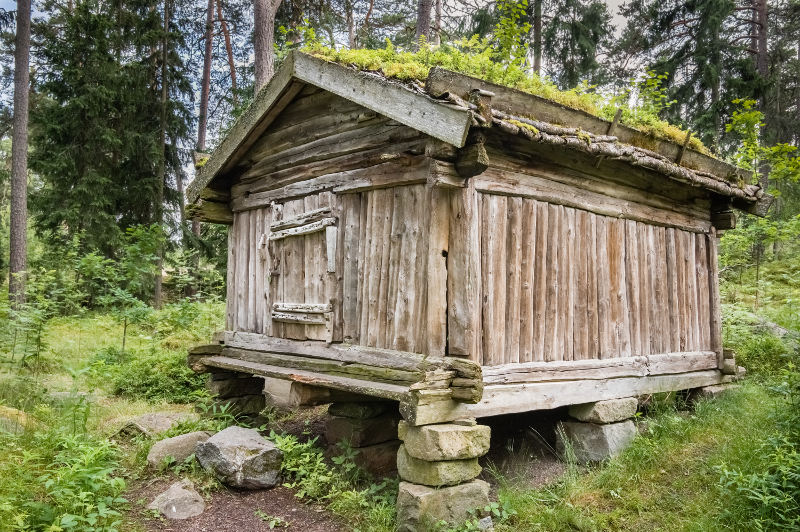 Take a walk back in time on the island of Seurasaari. Image: Getty

If you’re travelling to Helsinki between mid-May and mid-September, you’ll have the opportunity to wander around the incredible island of Seurasaari. Located just a few kilometres from the heart of Helsinki, this is where traditional cottages, farmsteads and manors from the past four centuries have been relocated. It’s a great way to stretch your legs and discover more about Finland’s little-known history. A place of peace and calm in the bustling heart of the city. Image: Visit Finland

Rushed off your feet on your Helsinki stopover? One suggestion is to work the Kamppi Chapel of Silence into your day. Located on the south side of busy Narinkka Square in central Helsinki, it offers a tranquil, quiet place in which to take time out. With its curved wood facade, the small non-denominational building embraces visitors with its gently curved walls and soothing timberwork. 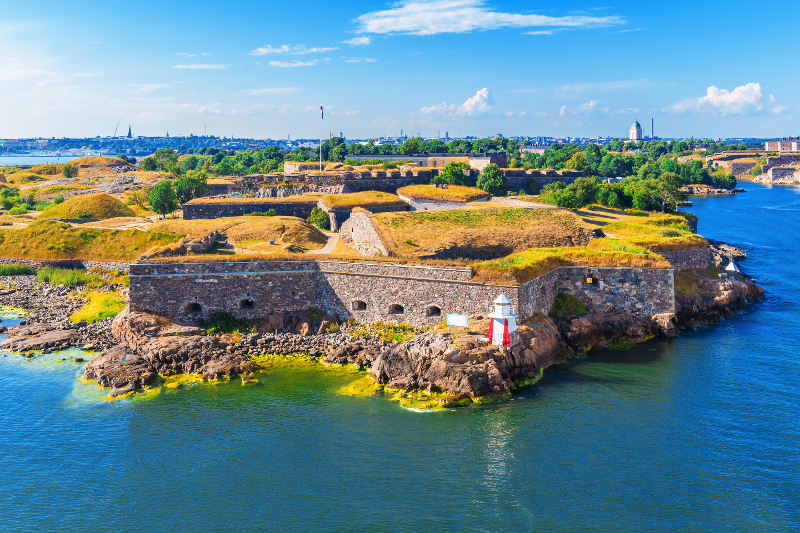 Brush up on your history and then buy yourself a beer at Suomenlinna. Image: Getty

Meaning ‘Castle of Finland’, Suomenlinna is on the Unesco World Heritage List as a unique monument of military architecture. What’s unique about this site is that in the course of its history, the fortress has served in defence of three realms: Sweden, Russia and Finland. Today, it’s a fascinating place to explore. Suomenlinna is accessible only by water, with a ferry service running from the Market Square throughout the year. There are six museums on the island, guided walking tours and – thankfully, plenty of cafes, restaurants, a bistro... even a brewery. 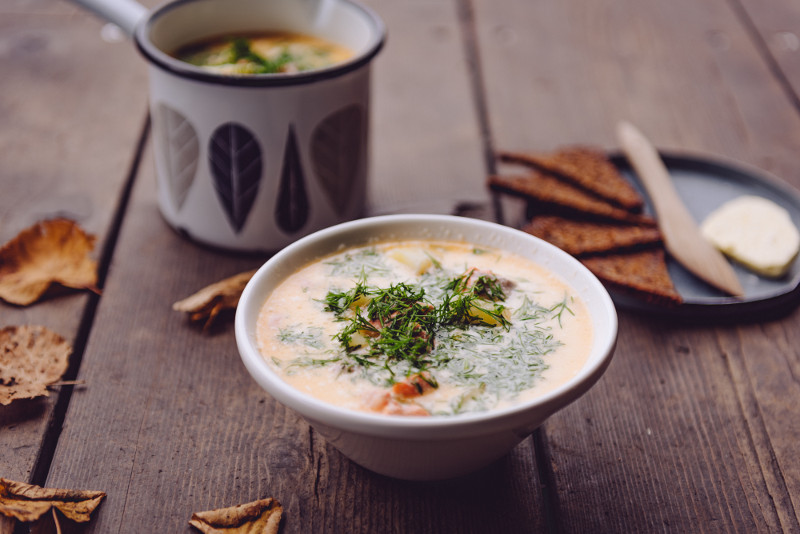 Helsinki must-try: the traditional salmon soup, like this one served at Loyly. Image: Loyly