The soul of a town’s cuisine is found on its streets. Around the bend you might stumble upon a taco truck, a hidden alleyway could reveal a flourishing dumpling stall, and just a few blocks from that revered Michelin star eatery you may just discover flavours your tastebuds will never forget. Street food is the "in thing" at the moment, with gourmet burger vans and mobile cake kiosks rolling into Australia’s capital cities, but the culture of roadside dining goes much deeper.

Street food is typically cheap, ready-to-eat finger food found in ethnic enclaves. It’s flavourful, sociable and economical – the sort of thing you might grab at a weekend market, before a football match or during carnival. Street food can be a bit of a gamble, it must be said, but just follow the locals’ lead and a world of taste awaits. Familiar dishes like bánh mi, Cornish pasties and felafel have made their presence known well outside their countries of origin, but one of the best things about sampling street food is taking a bite of the unknown. Why not start by adding these lesser known street foods to your epicurean repertoire? 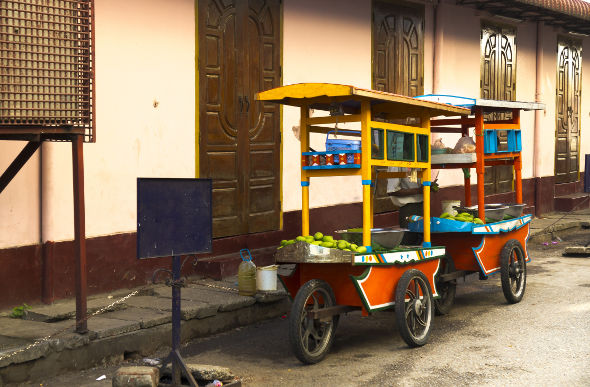 The king of Balkan street food is burek: filo pastry stuffed with fragrant mince or spinach, onion, cheese and herbs, rolled, buttered and baked. Burek doesn’t discriminate between breakfast, lunch or dinner but is best noshed hot from the oven when the spirals of pastry are a fresh golden brown.

The sandwich of choice for futból games and family get-togethers alike, choripán is a winning combination of Spanish-style chorizo sausage and crusty French bread. Accompanied by chimichurri sauce (parsley, garlic, onions, tomato, olive oil and herbs), choripán will challenge your notions of what constitutes a decent hotdog.

Touted as a “mouthful of the Mediterranean”, brik (pronounced breek) is similar to a flaky triangular turnover. All at once crunchy and gooey, salty and tangy, brik are usually filled with tuna, onion, chilli sauce, parsley and a whole egg. The trick is keeping the soft yolk in the middle from escaping!

Marrying the concepts pizza and pie, sfiha is a combination of lamb mince, fresh mint, nutty tahini yoghurt and zingy pomegranate. Commonly found in Baalbek, these open-faced pies are a summery dish to be enjoyed by the plateful. Before you know it, a few stray pine nuts will be all that remain.

Finding its roots in Kolkata, India, kati rolls are a kind of hybrid between kebabs, wraps and sandwiches. The saviour of Bengali office workers, kati rolls are traditionally lamb kebabs rolled inside paratha (Indian flatbread), with chilli, onion, sauce and spices, coated with egg on one side and sealed on a griddle.

Hotteok are doughy pancakes piped with nuts, sugar, honey, cinnamon and sunflower and sesame seeds. The golden treats are greased, pressed and served up in a paper cup by well-rehearsed street vendors like a warm hug, but the molten sugar caramelising inside can feel more like a slap in the face.

From the Arabic word meaning ‘sponge’, sfenj are Morocco’s equivalent of the doughnut. The deep-fried, unsweetened pastry rings are consumed in the early morning and late afternoon. Enjoy sfenj plain, or opt for a traditional topping: a sprinkle of sugar or honey soaked washed down with a glass of mint tea.

Sometimes referred to as the national dish of El Salvador, pupusa are plump, stuffed tortillas with several filling options: soft cheese, ground pork mince, refried beans or a mash-up of all three. Made from corn flour and served with mild or spicy curtido coleslaw, pupusa’s best friend is a local beer.

Bliny are made on buckwheat flour which distinguishes them from crepes or their close cousins, blintzes. Piled with toppings both sweet and savoury, bliny are fried to order and pure bliss on a frosty Russian day. The paper-thin pancakes ooze with cherries, cream, jam, or even salmon and caviar.