Cuisine in the 'Windy City' runs the whole gamut, boasting menus of many diverse ethnicities. These range from food trucks and cheap eats to fine dining and upmarket degustation experiences. You’ll never be at a loss to find delicious and varied food in Chicago but to sample the city staples, you can’t go past the big three: pizza, hot dogs and a well-cooked steak. 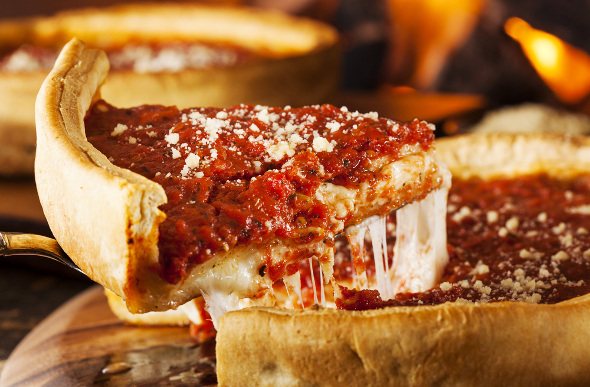 Chicago is known for its mouth-watering deep dish pizza, which resembles a pie more than a traditional pizza. Baked in a pan more akin to a cake tin, deep dish pizza features tall crust around the edge, making it easy to pile on the pizza toppings: cheese, sauce and any number of scrumptious meats and veggies.

The original Pizzeria Uno  on the corner of Ohio Street and Wabash Avenue (now Uno Pizzeria & Grill) stakes its claim as the originator of deep-dish pizza. Stop in for Uno’s Chicago Classic – a deep dish pizza with chunky tomato sauce, sausage mince, and romano and mozzarella cheeses.

If it’s all about the crust for you, try the perfectly caramelised pizza crust and overflowing cheese at Pequod’s Pizza on North Clybourn Avenue, or check out Michael’s Original Pizzeria and Tavern in Chicago’s Uptown neighbourhood. 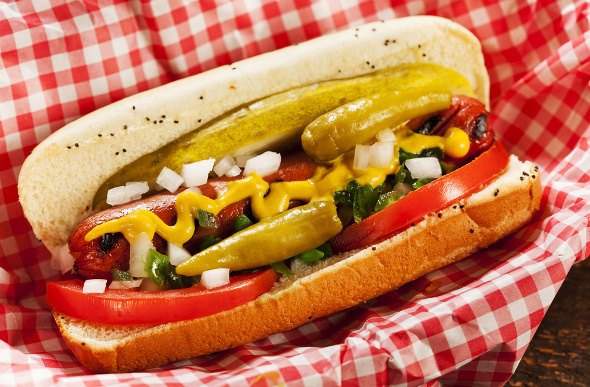 Chicago is one hot dog

Another Chicago institution is the Chicago-style hot dog – traditionally an all-beef frankfurter on a steamed poppy-seed hot-dog roll with toppings. These include yellow mustard, relish, chopped onions, tomato wedges, pickled chillis (known as “sport peppers”), and celery salt – and never, ever tomato sauce.

Chicago-style dogs got their start during the Great Depression, when street vendors would sell them for just five cents. Today, prices may have gone up, but the tradition continues.

For the best in the traditional style, don’t miss Gene & Jude’s in Chicago’s River Grove suburb, where you’ll get your Chicago-style dog topped with freshly made hot chips. Other go-to ‘dog houses’ include Wolfy’s two locations on Chicago’s north side and in the suburb of Lombard.

Fatso’s Last Stand is the place for those who prefer their hot dog chargrilled rather than steamed. Don’t forget the Superdawg drive-in – a great retro hangout with a hot dog that lives up to its reputation. 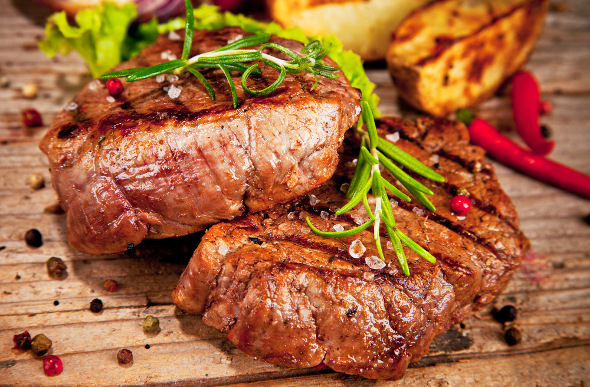 Beef it up in Chicago

Chicagoans love their meat and they have plenty of great steakhouses to show their love. For melt-in-your-mouth dry-aged beef in the heart of the city (near Chicago’s famous Magnificent Mile and Lake Shore Drive), make your way to The Capital Grille.

To truly embrace the old-school atmosphere for which Chicago is known, dine at Gene & Georgetti Steakhouse or Gibsons Bar and Steakhouse.

Gene & Georgetti has been serving up steaks since 1941. The wide-ranging but no-frills, tell-it-like-it-is menu (gotta love a place that serves a “bowl of dry bleu cheese”) will not disappoint. You can walk away ‘full’ in the knowledge that you’ve had a true Chicago experience.

At Gibsons, bring your big appetite because the portions are plentiful, from the martinis to the desserts. The menu boasts the usual suspects of steakhouse classics, including the wedge salad and shrimp cocktail. It also has your choice of beef cuts – filet mignon, porterhouse, sirloin, London broil; you’ll find them all here.

Australia’s 12 Best Outback Pubs
19 September 2020
How good is Australia? This great wide, ever changing land of ours. Lately it's been giving us itchy feet to hit the outback roads for an adventure.
Read Time: 2.9 mins
Culinary