Need a natural high? Queensland has plenty of them, for the adventurous and the not-so-brave. From jungle-surfing to treetop walks, ballooning to bungy-jumping, these 10 top spots will be the high point of any holiday in the Sunshine State. 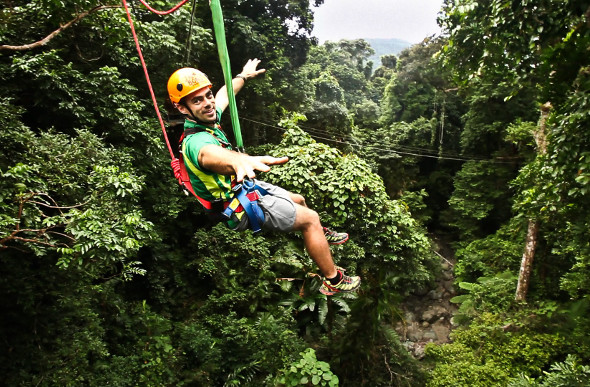 Zipline through the jungle in the Daintree. Picture: TEQ

Indulge your inner Tarzan or Jane with Jungle Surfing Canopy Tours, and fly from treetop to treetop 20 metres above the ground in the ancient Daintree rainforest of Tropical North Queensland. From here, you’ll get a bird’s-eye view of the canopy, rainforest streams and out to the Great Barrier Reef. And keep an eye out for the rare Bennett’s tree kangaroo.

Also try: Zip lining in subtropical rainforest at Finch Hatton Gorge, west of Mackay; or zoom over crocodiles at Currumbin on the Gold Coast. 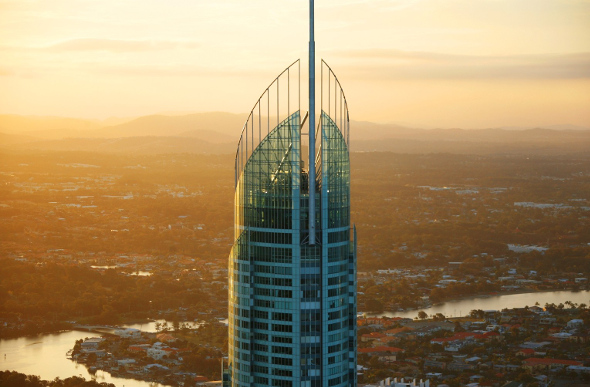 The Q1 towers over the Gold Coast. Picture: TEQ

Queensland’s tallest building – for now – is the Q1 tower at Surfers Paradise. From the SkyPoint observation deck on Level 77 (230 metres above sea level), you’ll have 360-degree views of the Gold Coast, from the surf to the hinterland. The more adventurous can tackle the SkyPoint Climb on the outside of the building – that’s 30 metres up nearly 300 stairs but don’t worry, you’re in a safety harness. 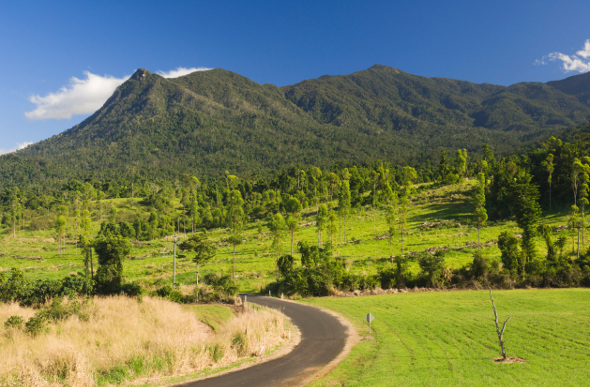 A rare glimpse of Mt Bartle Frere without the mist. Picture: Getty Images

The misty Mt Bartle Frere is Queensland’s highest mountain, at 1,622 metres. Also known by the Aboriginal name Chooreechillum, it sits on the Atherton Tableland in Tropical North Queensland. It’s a challenging, two-day walk through the World Heritage-listed rainforest of the Bellenden Ker Range in Wooroonooran National Park, with some rock scrambling for the last 300 metres to the summit, from where you’ll see the coastal lowlands and the Tableland.

Also try: Mt Barney (1,359 metres) in the Gondwana rainforest of the Scenic Rim; or Mt Ngungun (253 metres) in the Glass House Mountains of the Sunshine Coast hinterland.

[embed]https://youtu.be/dcBHl9bkflE[/embed]
If leaping off high places is your thing, you can give it a go at A.J. Hackett in the rainforest just north of Cairns. The 50-metre tower affords views of the northern beaches and the Great Barrier Reef. Swan dive, back dive, wear a blindfold, do it on tandem or on a bike – there are 16 jump styles. And if you chicken out, you can watch from the viewing platform with a licensed bar, sunchairs and live music on Sundays.

Also try: Jumping off a purpose-built crane 14-storeys high, over a race track, at Kingston just outside Brisbane. 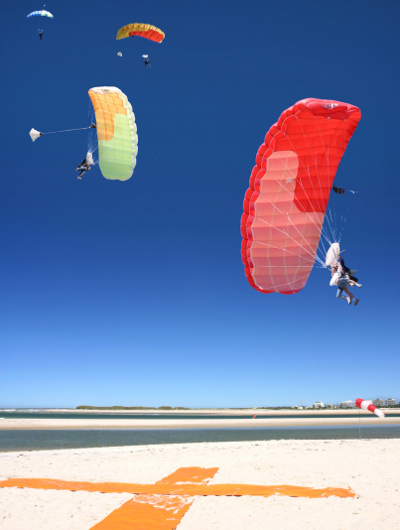 If bungy jumping is not adventurous enough for you, take it higher (with a parachute). Skydiving sites are dotted along the Queensland coast – why not try Caloundra on the Sunshine Coast, where you can admire the surf, the mountains, passing ships and migrating whales as you hurtle towards the sand for your beach landing.

Also try: Dropping in on Airlie Beach in the stunning Whitsundays, where too many islands are never enough. 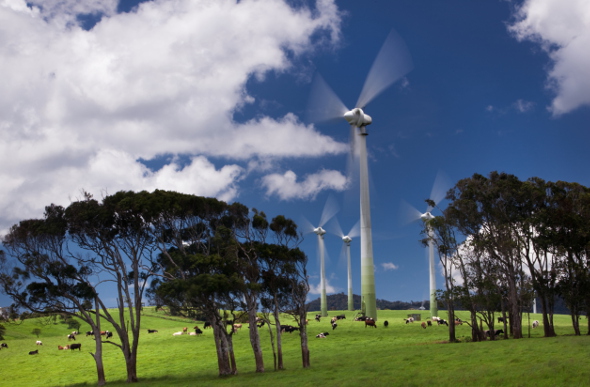 Tucked away on the Atherton Tableland, inland from Cairns, is Queensland’s highest town, Ravenshoe (920 metres), which might just make The Ravenshoe Hotel Queensland’s highest pub. It also has the state’s highest railway station ... we could go on. The former timber town (population 1,000) is now an eclectic enclave of art galleries and creative industries. Close by is Millstream Falls, along with crater lakes, rainforest trails and a field of 20 freestanding wind turbines 45 metres tall.

Also try: Yungaburra, also on the Tableland, with its heritage-listed sites, top dining and lively markets. 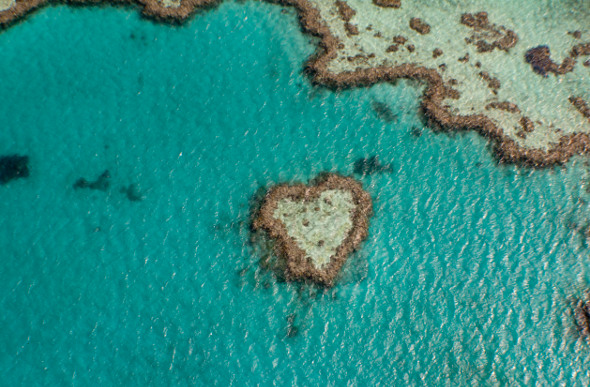 It’s hard to go past a scenic seaplane flight with Air Whitsunday from Airlie Beach over the astonishing Heart Reef in the Whitsundays, the site of several in-flight proposals. Also take in the Great Barrier Reef’s Hardy Lagoon, Hook Reef, Bait Reef and the deep blue channel known as the River. Set down for a romantic picnic on Whitehaven Beach before heading home.

Also try: Watch the molten sun set over the Outback Channel Country, on a helicopter flight from Longreach; time it right, and take a longer flight into South Australia to see Lake Eyre in flood. 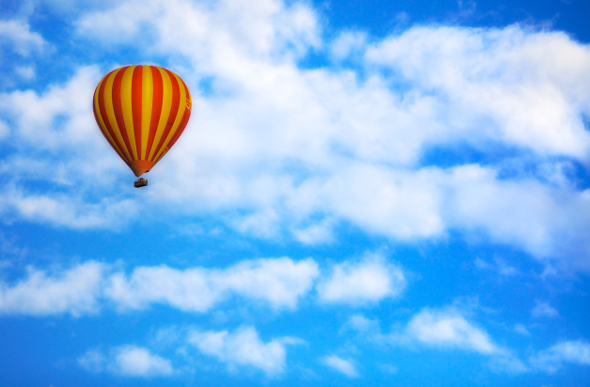 For a more leisurely pace aloft, step into the wicker basket of a hot-air balloon with Hot Air before dawn breaks in the Gold Coast’s Scenic Rim. As the sky lightens in coral colours, you’ll float above Mt Tamborine and Lamington National Park and, depending on the weather, you may even see the sparkling Gold Coast skyline. Best of all, you finish off with a Champagne breakfast and wine tasting.

Also try: Wallaby-spotting from on high as the sun rises over the Atherton Tableland, followed up by a Great Barrier Reef snorkelling trip.

The gondolas of the award-winning Skyrail Rainforest Cableway glide above the canopy of Barron Gorge National Park in the Wet Tropics World Heritage Area north of Cairns. It runs between Smithfield and Kuranda (the markets there are not to be missed), descending into two rainforest stations along the way.

Also try: Make the return trip via the Kuranda Scenic Railway (328 metres) for another adventure on high. 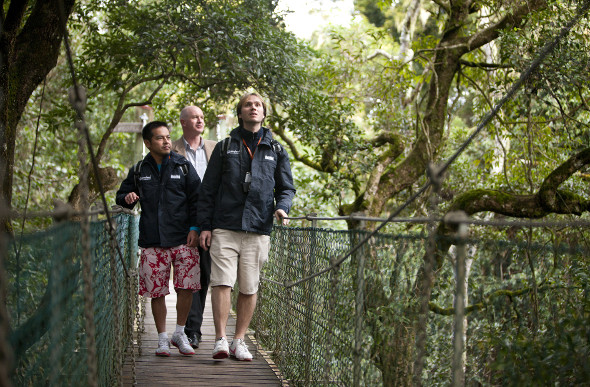 Walk through the treetops in Lamington National Park. Picture: TEQ

Come eye to eye with birds and animals, breathe the fresh mountain air and sniff the epiphytic orchids on O’Reilly’s Tree Top Walk in World Heritage-listed Lamington National park, up to 15 metres in the air. You’ll cross nine suspension bridges and climb into a strangler fig observation deck 30 metres above the ground, while on this 180-metre walk.