While hordes of Australian holidaymakers have enjoyed swimming at the gorgeous beaches, indulging in cheap massages and lying beside resort pools sipping cocktails in Phuket, there is far more to this south-east Asian nation than this one tiny island.

Thailand is made up of 77 provinces, many with equally appealing natural attractions as the consistently popular Phuket.

So on your next visit why don’t you check out one of the country’s other alluring destinations? Here are a few to consider. 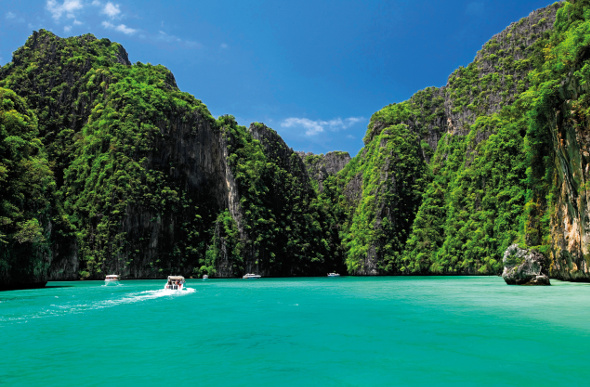 Close to Phuket, Krabi is known for its limestone islands and sea caves, which are best explored by long-tail boat.

One of the top places to stay is the one-time hippie haven Railay, a small peninsula with inviting beaches sheltered by towering limestone cliffs; a mecca for rock climbers. Krabi also encompasses the six Phi Phi Islands, including the uninhabited Phi Phi Leh, where the movie The Beach, starring Leonardo DiCaprio, was filmed.

Thanks to its Hollywood status, everyone who visits Thailand wants to go there, so if you want to experience it without the crowds it’s best to book the first cruise of the day and set your alarm.

Phi Phi Don, the largest island in the group and the only one that is permanently inhabited, also has a range of accommodation options and is a relaxing place to spend a few days chilling out, just a 90-minute boat ride from Phuket. 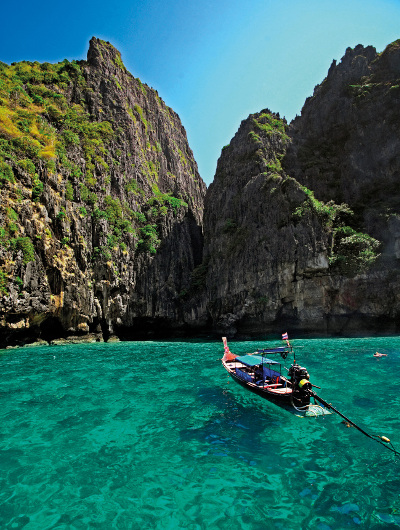 The third-largest island in the country, it has vibrant beach towns, including Chaweng and Lamai, which have everything from backpacker hostels and Irish pubs to 5-star resorts, acclaimed restaurants, cocktail bars and bustling nightclubs.

During the day you can spend your time lazing by the beach or taking part in yoga, cooking classes, snorkelling, scuba diving, Muay Thai boxing lessons, or playing golf.

About 15 kilometres north of Koh Samui, Koh Phangan is famous for its monthly full-moon party. But it’s also a great place to relax in a beachside bungalow or sign up for a yoga or health retreat.

Another 45 kilometres north, Koh Tao, or 'Turtle Island', is regarded as one of the country’s top spots for scuba divers, with an abundance of colourful coral and marine life, including sharks and rays.

Bordering Phuket and Krabi, Phang Nga province has a number of national parks crying out to be explored.

Walk the nature trails of Khao Lak National Park with a guide, taking in the view of mountains, evergreen forests, interesting rock formations and rivers, while looking out for wildlife such as monkeys, deer and woodpeckers.

Cruise among Phang Nga Bay’s islands, including Koh Tapu, which is also known as 'James Bond Island' because it is where The Man with the Golden Gun was filmed in 1974.

The islands of Mu Koh Similan and Mu Koh Surin are an easy day trip from Phuket and Krabi, and are recognised as having some of the best dive sites in the world (including the horseshoe-shaped reef Richelieu Rock, where you may find yourself floating beside a whale shark). 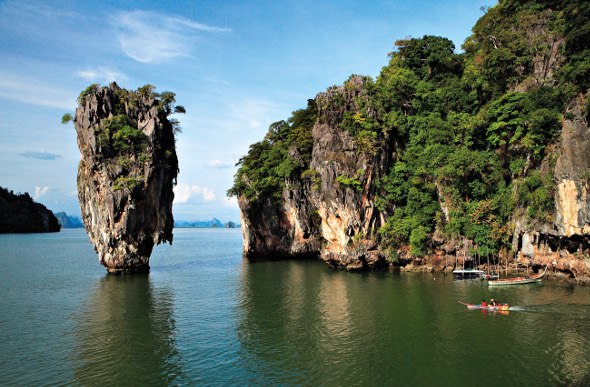 Looking for experiences? 6 Things To Do On Koh Samui, Thailand

Find the right spot. Quiz: Where Should You Holiday In Thailand?

Two of the best include the largely undeveloped Koh Lipe and Koh Tarutao, which can be reached from the port town of Pak Bara.

Thale Ban National Park, 40 kilometres from the town of Satun, has a large lake and several waterfalls. The prettiest include Namtok Ya Roi, where you can swim in a pool at each of its nine tiers, and Namtok Ton Plio, which originates from Mount Chin and flows over a towering cliff.

An archipelago consisting of more than 46 islands in the Andaman Sea, Trang Province has seen few tourists until recently and is worth considering if you are looking for somewhere quiet and relaxing off the well-worn tourist path.

It is similar to nearby provinces such as Krabi, with limestone mountains, jungles, waterfalls and beaches. Its largest island, Koh Libong, has a Muslim fishing community and has become known as a good place to spot dugongs.

Other highlights include swimming at the pinch-me-beautiful Emerald Cave, or Morakot Cave, hidden in the jungle at Haad Chao Mai National Park; as well as Namtok Khao Chong and Khlong Lam Chan parks. 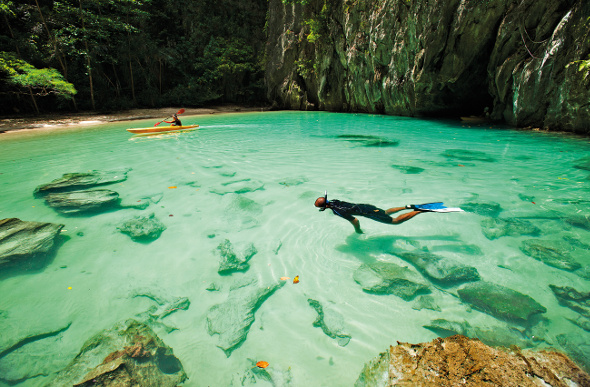 Swimming in the beautiful Emerald Cave in Trang Province

East of Krabi and about 800 kilometres south of Bangkok, Nakhon Si Thammarat is the second-biggest province in Thailand’s south, after Surat Thani.

Once a major trading centre for merchants from the British, Portuguese and Dutch empires who set up factories there, Nakhon Si Thammarat city has a mix of Muslim, Buddhist and Hindu temples and is a wonderful place to see a performance of Thai nang talung, featuring handmade shadow puppets.

The area also has national parks,waterfalls and quiet beaches. You can book boat tours to see rare pink dolphins in the northern district Khanom, go kayaking and see locals planting seagrass to make a living.

A little more than 300 kilometres from Bangkok, Trat is Thailand’s easternmost province. On the border with Cambodia along the Khao Banthat mountain range, it is known for fishing and gem mining, and has more than 50 islands.

The best known is Koh Chang, or Elephant Island, which is the country’s second largest after Phuket. Covered in rainforest, with stunning beaches for snorkelling, it was claimed by backpackers but now attracts more well-heeled travellers, thanks to its luxury resorts and spas.

But there are still plenty of affordable accommodation options available. Places to stay include Laem Bang Bao, Hat Sai Khao, Hat Kai Muk and Hat Ta Nam. A quieter, less developed alternative is Koh Kood, which is the southernmost of the Koh Chang island chain.

While traditionally its economy has been reliant on coconut and rubber plantations and fishing, its population is increasingly turning to tourism and it has become a hot spot for Thai holidaymakers, thanks to its forests, pristine beaches and clear water.

It takes four to five hours to get there by slow boat from Dan Kao or Laem Ngop piers, or one hour by speedboat. Just be sure to pack heavy-duty mosquito repellent and long-sleeved clothing as it has been known to host malaria-infected mosquitoes. 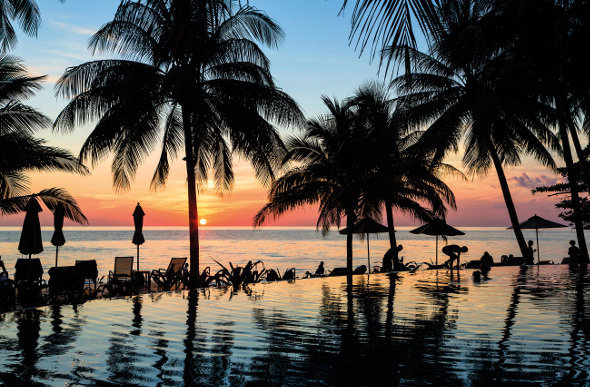 A stunning sunset in Koh Chang

If you’re into soft adventure, Mae Hong Son Province could be the place for you.

In a valley surrounded by high mountain ranges, Mae Hong Son town is a great base for a range of activities including rafting, four-wheel-driving, fishing and soaking in hot springs.

The province is in Thailand’s far north, on the border of Myanmar, so on the cultural side you can see Burmese and Lanna-style temples, witness traditional dance performances, ceremonies and festivals, and spend the night in home stays or hill tribe villages.