Why Sri Lanka Should Be Your Next Culinary Adventure

Why Sri Lanka Should Be Your Next Culinary Adventure

Relaxed one moment, frenetic the next, Sri Lanka has been described as, ‘India-lite’ and akin to ‘Bali 30 years ago’. For decades, tourists avoided the island, but in recent years, with the civil war in the north over for almost 10 years, curious travellers in search of spice, flavour, sunshine and a new tropical frontier are flocking to Sri Lanka. 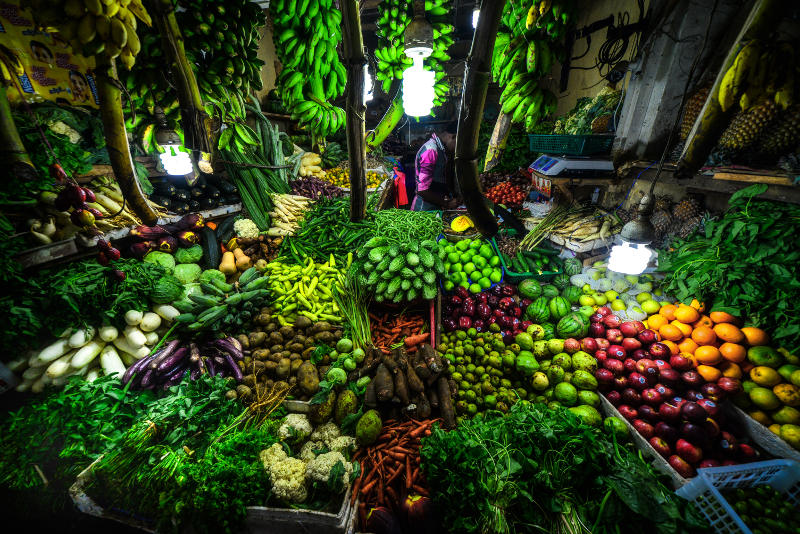 From the frenzied energy of Colombo with its bustling market to adventures high in the hills of tea country, and south to the gentle coast between Weligama and Tangalle with its stellar seafood and hidden beaches, Sri Lanka is a bonafide food lover’s paradise. 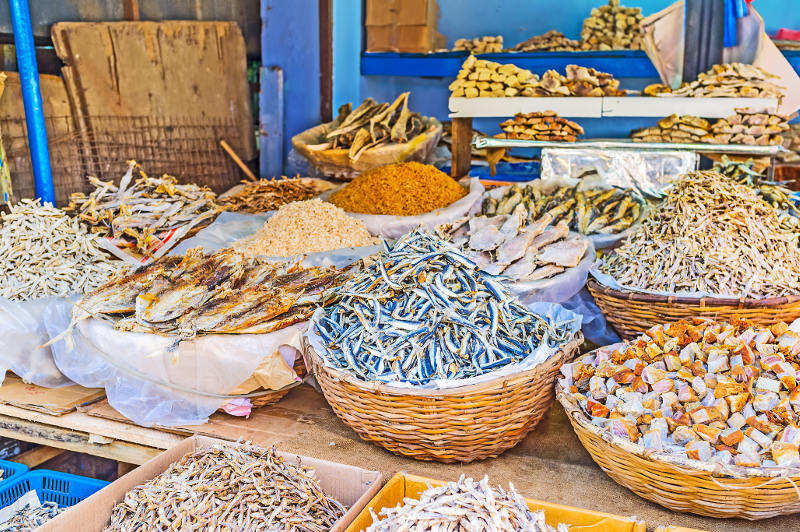 On the drive from the airport to town, you are instantly thrust into the energy of Colombo and scenes glimpsed from the window hint at locals’ appreciation for fresh homemade food. Children in white school uniforms on the back of their fathers’ mopeds zoom past, holding shiny tiffins filled with lunch from home, while roadside shopkeepers artfully arrange produce for sale, including melons, pink wood apples and bunches of greens that will later be steamed with garlic and chilli.

Workers on their morning break line up to buy a snack: a sliver of pineapple sprinkled with chilli powder and sea salt to cool them down, or a handful of rice that has been studded with meat and chilli, wrapped in a banana leaf and steamed, known as lamprais. It’s these captivating everyday scenes that serve as a mouth-watering introduction to the deliciousness that awaits in Sri Lanka’s capital.

At the table: Egg hoppers are the breakfast of choice and an early-morning arrival from Australia means they’ll likely be the first meal of your trip. Steamed eggs arrive in delicate, crispy bowls fashioned from rice batter and are served with seeni sambol, a sweet onion relish. They’re a delicious beginning to a day of culinary adventure. For lunch or dinner, what is known locally as ‘the full Sri Lankan’ is always on offer. Curries, such as prawn, fish, pork and chicken, and vegetarian versions made from eggplant or beetroot, sit alongside saffron dahl and a selection of sambols; mint sambol is a refreshing hit of the fragrant herb mixed with coconut, green chillies and ginger, while pol sambol sees grated coconut laced with fish flakes and chilli powder. Sri Lankan-born chef and television presenter Peter Kuruvita recommends dining at Nuga Gama, in the Cinnamon Grand Hotel. “It has a fantastic village feel and a huge range of traditional local curries, which you can enjoy sitting under an ancient banyan tree.” 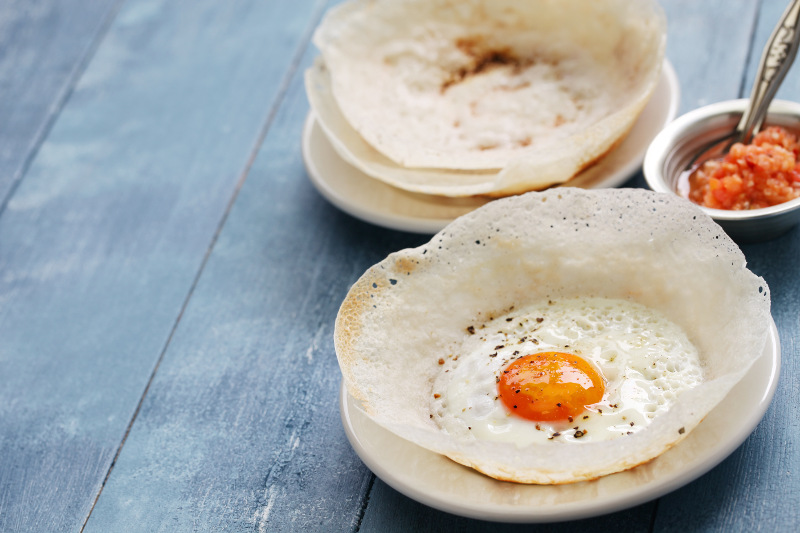 The traditional egg hopper will set you up for a day of taste sensations. Image: Getty

Pettah Market: Spread across several blocks, Colombo’s central open-air food market is an otherworldly jumble of stalls jammed between busy roads. Buses honk, cyclists peddle past and bumper-to-bumper cars crawl at a snail’s pace. Just an arm’s length from the traffic, stalls have essential kitchen equipment piled high, from coconut scrapers to chatties (terracotta cooking pots common in Sri Lankan homes). Across the way, the spice merchant presents mace, cinnamon sticks as long as his arm and just-ground garam masala, while fruiterers peddle banana blossoms, tiny limes, ‘ladies’ fingers’ (okra, a popular base for curries), and chillies in green, red and yellow. It’s the perfect destination to pick up a practical souvenir for your kitchen back home.

Paradise Road: Following a morning at Pettah, find a welcome respite from the heat, the noise and the traffic at chic design emporium and cafe Paradise Road in District 7, the well-heeled end of town. Housed in a colonial mansion, the stairs to the cafe wind through several floors of cookware, homewares and gifts. Worthy keepsakes of hand-turned ceramics, printed tablecloths, runners and napkins, forged silver salad servers and pretty tins of tea line the shelves. Take a seat under the colonial arches, or outside on the terrace overlooking the Colombo Town Hall, and order a refreshing glass of lime soda. The concoction of soda water mixed with fresh lime juice and mineral-replacing sea salt will cool you down.

Formerly known as Ceylon, Sri Lanka was once a renowned coffee producer until a fungus wiped out the country’s crops in 1865. It wasn’t until 1867, when former coffee farmer James Taylor planted the first tea plant, that Ceylon became a tea producer and trader. Tea is now the mainstay of the Sri Lankan economy and in recent years, tea tourism has taken off. 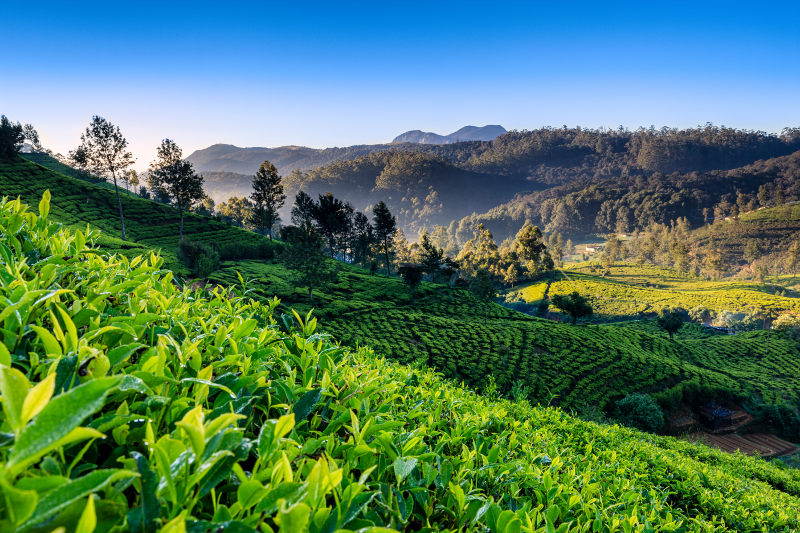 Ceylon Tea Trails: To truly immerse yourself in the tea experience, a journey into the hills to tea country is a must. Ceylon Tea Trails, owned by the Dilmah family, is a four-hour train ride or 50-minute flight from Colombo. Its series of five plantation cottages is the perfect base for touring plantations where local women on steep terraces still carefully pick glossy green leaves by hand. Watch as their haul of leaves are dried, roasted, cut and packed. You’re then shown how to ‘cup’ tea, slurping each brew from a soup spoon, rolling the liquid around in your mouth before spitting it out. Your guide will explain the nuances of each tea and how it’s assessed and graded. With tea training over, sit with a cup of Ceylon’s finest, overlooking the plantations.

Colombo: The British brought their tradition of high tea to the island. Colombo’s oldest and most revered colonial hotel, the elegant Galle Face, built in 1864, has served high tea every day since, complete with three-tiered trays of cucumber sandwiches and Battenburg cake, a checked-pattern sponge covered in marzipan. The grand property affords views out to sea and across the famous Galle Face Green where children play and games of cricket often break out.

Galle Fort: A 1.5-hour journey south of Colombo, 120 kilometres by highway, lies World Heritage site Galle Fort. A walled fort town, Galle was captured by the Dutch from the Portuguese in 1640. The town’s heritage status means that much of the Dutch architecture is still intact, and luxury hotel Amangalla is a shining example. Built in 1684, the hotel began its life as the Dutch Military Headquarters. On the hotel’s terrace, with its grand arches and high-backed rattan chairs, waiters taxi afternoon tea stands of scones and finger sandwiches to guests, following with a silver pot of tea. 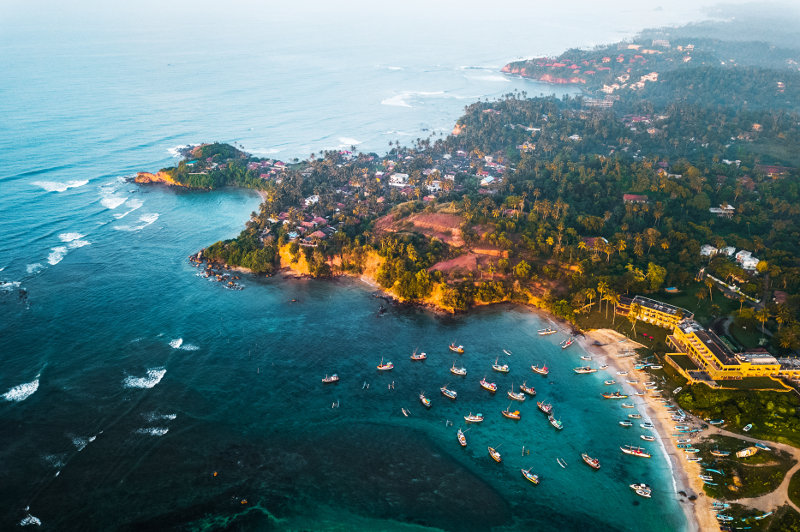 A pretty hour’s drive from Galle, the island’s sleepy south coast has begun to gain attention. Along the coast between Weligama and Tangalle, secluded beaches, understated resorts and private villa accommodation make for a relaxed holiday destination where long sunny days are punctuated by fishing, cooking classes, eating, and yoga or surfing to work it all off.

Cooking experiences: Many private villas offer a host of market, fishing and cooking experiences. Roman Haluska, the general manager of Cove Houses, arranges excursions, market visits and private fishing trips for his guests. Wake at 5am to meet local fishermen on the beach, help them push their boat out and spend the morning at sea pulling in fish after fish. You’ll then return in time for a breakfast of egg hoppers and coconut pancakes ahead of a cooking class with chef Jaya to prepare your catch, Sri Lankan-style. A yoga class and a latte: Swedish-born couple Petter Toremalm and Linn Lundgren visited this stretch of coast for the first time in 2010. Then and there they decided they’d live here and in late 2016 a small boutique beachfront property, Ceylon Sliders, at Weligama, was born. The courtyard cafe serves espresso coffee, still hard to come by across most of the island. Yoga is taught on the roof every morning, and there are five guestrooms if you want to move in. “We wouldn’t live anywhere else in the world,” says Petter.

Ayurvedic cuisine: Like India, Sri Lanka has a strong history of Ayurvedic medicine. Retreats such as Surya Lanka Ayurveda Beach Resort Talalla, near Matara, and Underneath the Mango Tree on Dikwella Beach offer stays that include a consultation with an Ayurvedic doctor to determine your ‘dosha’ (body type), and a weekly program tailored to your body’s needs, including menus and a schedule of daily massages and treatments. In addition, cooking classes are offered, where the chef will teach you how to roast and blend your own curry powder at home and how to grate fresh coconut using a traditional coconut scraper. Day trips include a boat trip to an island where essential Ayurvedic herbs are grown and a visit to meet cinnamon growers, a spice used in nearly every dish you’ll eat on your Sri Lankan food odyssey.