In this episode, travel consultant Greer Gardiner catches up with fellow consultant and Hawaii expert, Jason Chow for an action-packed 48 hours exploring not one but two of Hawaii’s beautiful islands. Starting on Oahu, then heading to Maui, the pair experience the best of Hawaii’s culture, surfing, food and hospitality.

It’s a beautiful day in Hawaii and Flight Centre travel consultant Greer Gardiner is ready to make the most of it! Meeting up with Hawaii expert and fellow travel consultant, Jason, the pair waste no time getting into the spirit of aloha. First up is a hula lesson!

Once they’ve got the hula in the bag, Jason takes Greer down to the beach for a surf lesson at one of the most iconic surf breaks in the world – Waikiki!

Having worked up an appetite in the surf, Jason and Greer head to the North Shore of Oahu for a healthy, delicious vegan brunch at Ai Love Nalo Bakery.

After cruising along the North Shore in a classic Mustang convertible, Greer and Jason head to Kualoa Ranch – the home of Jurassic Park! This private nature reserve is where many a films have been shot, including Lost, 50 First Dates, Godzilla, Kong Scull Island and of course Jurassic Park.

The first activity they have in store is horse riding through the picturesque valley with their guide Doug. Then it’s straight onto an ATV to get a closer look at the Kong Scull Island set, a visit to a lookout that has views right over the valley, then finally an adrenaline-pumping ride down a zipline!

From one beautiful destination to another, it’s time to head beachside for a Mai Tai. As the sun sets, Greer and Jason go for a stroll along the aptly-named, Sunset Beach, an iconic surf break renown to draw professional surfers from right around the world.

After exploring the beauty of the North Shore, it’s time to head back to Waikiki for dinner at Moana Surfrider, the most historic hotel in Waikiki. Jason has organised to have dinner at Beachhouse at the Moana restaurant, with head chef David Lukela.

Up bright and early to make the most of the short time they have here, Greer and Jason set off to hike the Diamond Head Crater – an extinct volcanic crater. Joined by local guide Levent, they learn about how the crater was formed 300,000 years ago, and its significance to the Hawaiian people.

At Ahihi Bay Boat Launch, Jason introduces Greer to Captain Mark, who welcomes them aboard his boat. The charter takes a tour of the volcanic rock coastline and then out towards Molokini Crater where they’re lucky enough to see a few humpback whales passing through!

For a quick lunch stop Jason takes Greer for some of the best fish tacos on the island from the Paia Fish Market’s southern Maui location. They sit back by the sea to devour their tacos before setting off on the road for an exciting surprise.

Maverick Helicopter tours whisk Jason and Greer away along the expansive Maui coastline where they have the perfect view of the rainforest and the majestic waterfalls that form as the water from the forest makes its way down to the coast. The helicopter lands in the middle of the rainforest and the pilot Jake shows them some of the native fauna in this isolated location.

This evening Jason takes Greer to the most authentic Luau in Maui. Here at the Old Lahaina Luau they learn Hawaiian bowling, a game developed to maintain the skills of the warfare during peaceful times. They watch how to open a coconut and extract the milky flesh for food. Greer and Jason tuck into a traditional Hawaiian feast followed by an exciting display showcasing the traditions and developments of Hula over the centuries. The show unfolds as the sun sets behind the dancers with a truly spectacular Pacific Island sky.

The best way to start the day is always with a little exercise, so Jason organsies for him and Greer to go out into the bay on stand up paddle boards.  It’s the perfect way to work up and appetite for their final breakfast together, before they bid farewell on an epic 48 hours across two beautiful Hawaiian islands. 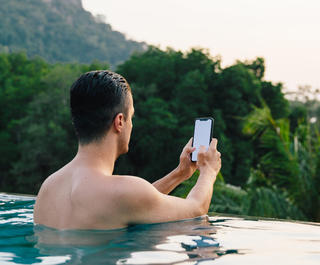 How To Make The Most Of Your Annual Leave In 2020
23 December 2019
They roll around every year, but do you really make the most of your public holidays? Earlier this year, Ray Morgan Research announced that
Read Time: 8.5 mins
Hotels

Treat Yourself: 7 International Hotels With All-Inclusive Snacks
21 November 2019
We all love free things, especially when we’re travelling. It’s OK to admit, after all, you’re only human. Well, now you can indulge guilt-free at
Read Time: 3.9 mins