Voyager Of The Seas Launches In Australia

Voyager Of The Seas Launches In Australia

In days long since passed, cruise ships were a sedate way to travel. Known more for shuffle board and idle strolls along the Promenade Deck, the ships of yesteryear carried us in steady contentment from port to port. Well, fast forward a few decades, and you’ll find that today’s massive cruise liners are vastly different vessels.

Today, the fun starts the moment you board your cruise, and with Royal Caribbean launching its Voyager of the Seas ship down under, the Australian summer cruise options just got a whole lot more interesting.

Not your average cruise ship

Imagine a splashy surf rider simulator, the coolest ice-skating rink, a bumper car studio, mini-golf course, rock climbing wall and inside suites with a “virtual” balcony, and you’ll soon realise, this is not your ordinary cruise ship. Launched in 1999, Royal Caribbean recently spent USD$80 million on a full scale refurbishment for its Australian debut, solidifying the cruise lines position as one of the leaders in the Australian market.

The Voyager is the flagship of Royal Caribbean’s Voyager Class of ships, and its Australian summer cruise season officially got under way yesterday with a spectacular launch from Sydney’s Circular Quay. Royal Caribbean pulled out all the stops with an energizing pool-side deck party with entertainment provided by X Factor sensation Nathaniel as the headline act, followed by a parade, yes, a parade, inside the Promenade deck atrium.

This is by far the largest cruise ship to be based in Australia, and the following numbers put its massive scale into perspective. Towering 15 decks high, the ship’s passenger capacity is over 3,800. There are 10 swimming pools and whirlpools, 13 bars, clubs and lounges, a casino, a library with thousands of titles to choose from and more eating options than you can fit into one day – but more about that later.

How I worked off my meals...

Her massive size seemed to dwarf even Circular Quay, where we boarded the giant floating palace at 1pm. With little time to spare before the anticipated sun deck party, I quickly set about exploring the 15 decks. Armed with my map and walking shoes (I was working off my 3 course dinner in advance!) I set out on a mission, desperately wanting to check out the different stateroom categories. Normally, the full gamut of stateroom options are not available for inspection, but clearly Royal Caribbean was proud of their new look for the ship and they gladly opened up the Owners Suite, the Grand Suite, a Junior Suite, as well as oversized family rooms. 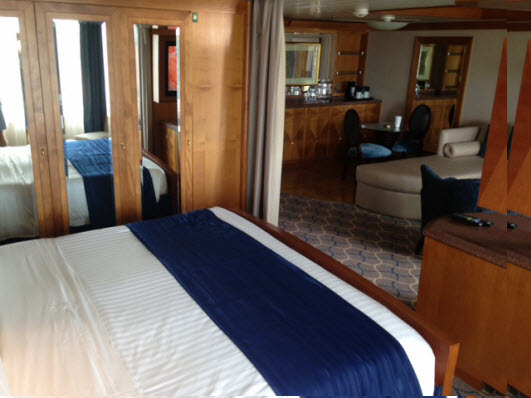 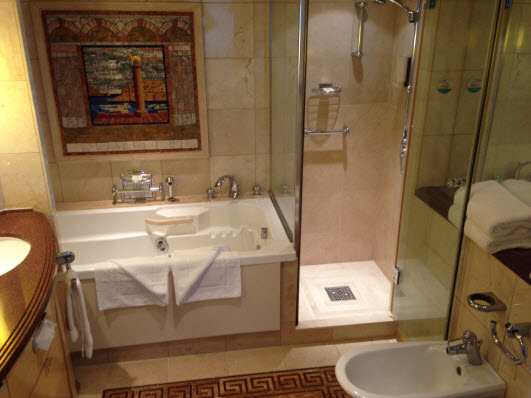 I was very curious to see these rooms. Traditionally, inside rooms are the most value oriented cabins on board, and in this respect the cabin is the same. Located on the inside of the ship, these windowless cabins provide comfortable accommodation at an affordable price. There is however, one incredible feature that sets Voyager’s inside cabins apart from other ships.

All inside staterooms have an 80-inch high-definition screen that projects the as seen by the ships camera outside. The image is enhanced to appear to be that of a balcony view. With real-time views and outside sounds available, the screen can be turned on or off at will, similar to closing your curtains on an outside room, but at the mere push of a bed-side button.

Watch the ocean slide by, gaze at the stars in the evening or simply see what the weather is outside without ever having to leave your cabin. 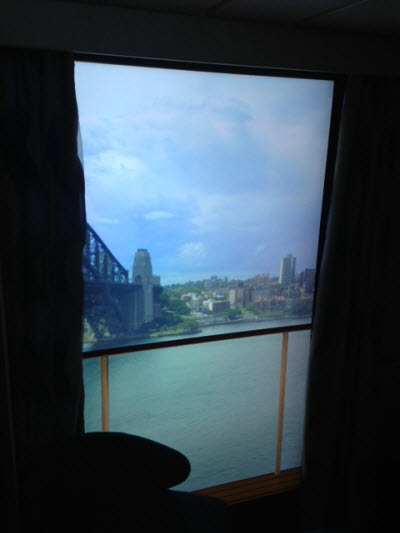 I had to be talked into this activity by a colleague, but without much prompting as it looked like such fun. Australia's first surf simulator at sea splashes over 60,000 gallons of water every minute. This flowing deluge allows you to boogie-board or stand-up surf right on the ship! This incredible feat of engineering will turn anyone into a surfing pro in no time. Even the surfing experts will have a blast on the Flowrider.

One tip (and yes this is from experience, and no, photos are not available) - guys, wear board shorts that can be tied tightly around your waist to prevent them from flying off in the harmless, but fast flowing current. Girls may want to consider a one piece swim suit. With all that water rushing by, landing in the wrong direction could be potentially embarrassing! 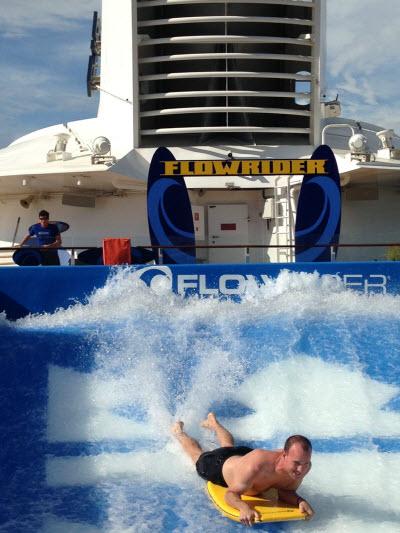 Surfing the high waves on the Flowrider. 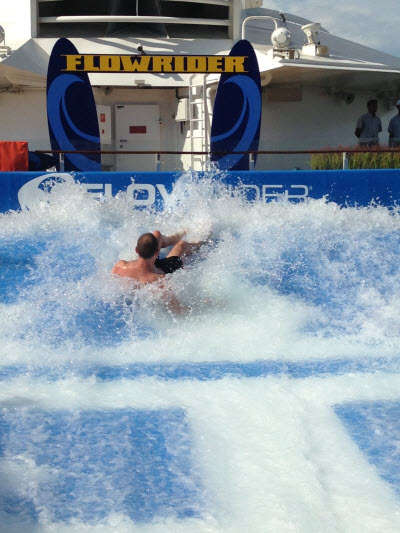 While not new for ships in Royal Caribbean’s Quantum, Oasis and Freedom class ships, an ice-skating rink is new for Voyager. This is a unique feature not seen on any other Australian based ship. Ice-skating sessions are available for all ages during the day and each night there are dazzling performances to entertain the crowd. The ice skating rink is a great ship venue for family entertainment on the high seas.

Movies under the stars

A fun addition to Voyager is the pool side “Movies under the Stars” program. The ship hosts an outdoor movie night on most evenings (weather permitting) around the main pool deck. Relax on a lounge or deck chair, sip your favourite cocktail and enjoy the latest feature films.

One of the biggest draw cards for cruising is the many food options available. Most restaurant meals are included in the fare with popular options including Windjammer Cafe (buffet) and the main dining room (sit down meal) and a host of other cafes and Promenade Deck food options.

Voyager of the Seas has been updated with Chops Grille (an American style steak-house), Giovanni's Table (popular Italian) and Izumi (Japanese). These options attract a small surcharge per person but are still a fraction of the price compared to similar high quality meals found on land.

All restaurants use local cuisine where possible as well as seasonal produce. Flexible dining times are available, with “My Time Dining” and room service. 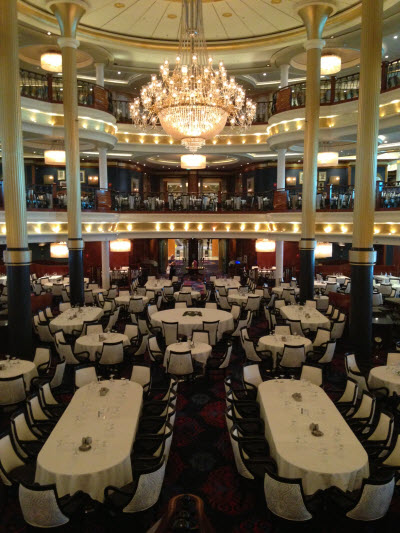 New dining room aboard Voyager of the Seas.

The DreamWorks Experience brings all your favourite characters to life with a 3D experience. Characters from shows such as Shrek, Madagascar and Kung Fu Panda appear in parades, character dining, and more. The uplifting and energetic parade is featured on the main Promenade deck accompanied by dancers and musicians.

Voyager is packed with entertainment, dining and shore options. It's hard to fit everything in on one journey, but here’s a quick rundown of just some of the many other features to enjoy.

Pulling out of the iconic Sydney Harbour, sailing towards the majestic head lands, we passed beneath a shower of dazzling fireworks, the colourful display bursting over our heads to commemorate the great ship’s new Australian home. As we passed the big white sails of the Sydney Opera House, crowds gathered on the pool side deck, cheering and clapping in recognition of the harbour’s new, grand lady - Voyager.

The ship might be ultra-modern, but as it turns out, the magical traditions of yesteryear can still be felt. 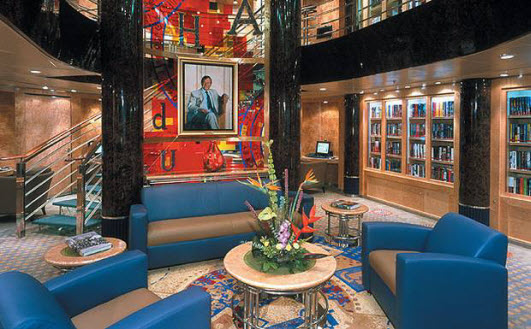 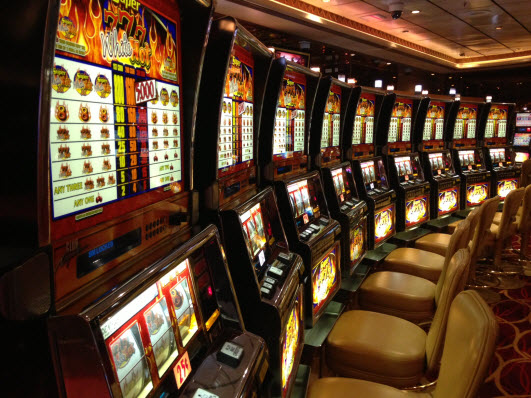 Voyager of the Seas casino. 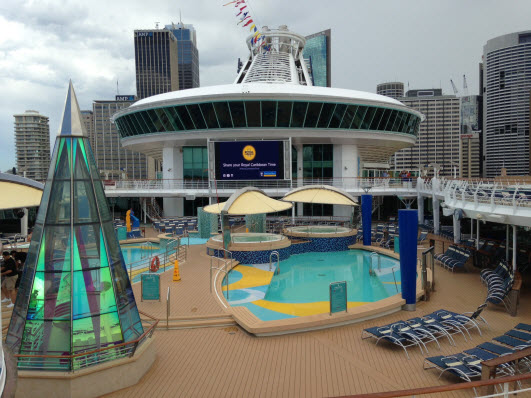 The Voyager of the Seas cruising schedule will include the South Pacific islands, New Zealand, Tahiti and Hawaii, South East Asia, the Queensland Coast and various other Australian itineraries.

Speak to your travel consultant today to experience the latest cruise offering in Australia.