Rome is one of the most vibrant and exciting cities in the world, in which modern life mingles with the ruins of the past. Accommodation in Rome fans out from the central Roma Termini train station in an overwhelming assortment of hostels, B&Bs, mid-range hotels, luxury 5-star hotels, apartments and villas. With so much to see and do in this fascinating city, having a conveniently located, comfortable retreat at the end of the day is a must-do.

For a basic introduction to Rome accommodation, check out our guide, below.

Choose your style of Rome hotel

Hotels in Rome can conjure up a lavish, bygone era or reflect the very best in modern Italian design. They can be quaint and comfortable or grand and luxurious. Apartments give you the opportunity to keep costs down with self-contained kitchens and laundry facilities, while the 5-star hotels can sometimes even help you secure VIP tickets to popular attractions.

Where to stay in Rome

If your ideal Roman holiday consists of staying in a character-filled palazzo set amongst charming alleys with cobblestone streets, chances are the Centro Storico (historic centre) is what you have in mind. This is romantic Rome, and prices can sometimes be high but the atmosphere is unforgettable. Around the Roma Termini, the Monti, Esquilino and San Lorenzo districts have plenty of budget hostels and hotels to choose from, as well as a great dining scene. If money is no object, Via Veneto’s grand hotels come with all the trappings, such as uniformed doormen. Uphill from here, Villa Borghese offers even more luxurious hotels, although it’s not as easy to get to the city centre from up on the hill.

Best time to stay in Rome

Rome is one of the most popular cities in Europe and, as such, comes with a very busy summer season. The best time to stay in Rome is either from April to June or late September to October, either side of the high season. August is best avoided; not only can the weather be incredibly hot, many Italians take the whole month off and lots of shops and restaurants are closed. During the shoulder seasons, days are mild and nights are cool.

Rome’s historic centre is not particularly vast, so walking is the best way to get around the major sites. Traffic is notoriously hectic, so hiring a scooter might be an option if you’re an experienced driver but Rome’s streets are not the place to learn. The best way to get around is either the Metro, buses, taxis or a combination of all three. There are taxi ranks at airports and major transport hubs such as the Stazione Termini. 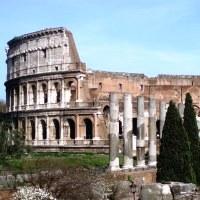 What’s the simplest way to arrange your accommodation in Rome? Let one of our travel experts do it for you! As well as access to all the latest deals, they have insider hints, tips and a wealth of travel experience to draw on... and they love to create amazing holiday packages.